In this post, I talk about teaching the short film "Peter and the Wolf" in my Eighth Grade English Language Arts class in Queens.
I Needed to Teach Something Quickly; I Chose "Peter and the Wolf"
It's interesting how I come across content to teach. Usually, deciding what to teach is not a problem because I spend a good chunk of the weeks leading up to the new school year mapping out my courses. However, this past year, teaching my Eighth graders, there was a day that I needed to fill with an engaging lesson. We had just completed a forty-day mythology unit. I say "forty days" as if we were in the desert or something, but it was forty discrete lessons, each about forty-five minutes in length. So I had a "free day" before we started our new unit. So, hence, Peter and the Wolf!
Suzie Templeton Short Film "Peter and the Wolf"
Suzie Templeton is a gifted director, and her animated short film, "Peter and the Wolf," is based on Sergei Prokofiev's famous score. The movie is only about twenty-five minutes, perfect for my lesson. Also, because of its fairy tale elements, it fits nicely with a unit on mythology.
Do Now: Setting a Work of Literature to Music
I like to get my kids' gears turning, so as they entered the class during the passing period, I asked them if they were to set a story or play or myth that they had read to music what would it be. I was hoping for something like Orpheus and Eurydice set to "Like a Bridge Over Troubled Water," but I got Daphne and Apollo set to A$AP Ferg. I'll take what I can get. Also, I was keen to set my lesson to a reading standard that states students should analyze a representation of a subject or a pivotal scene in two different artistic mediums (Reading Literature Standard RL.9-10.7).
Watching the Movie and Answering Questions 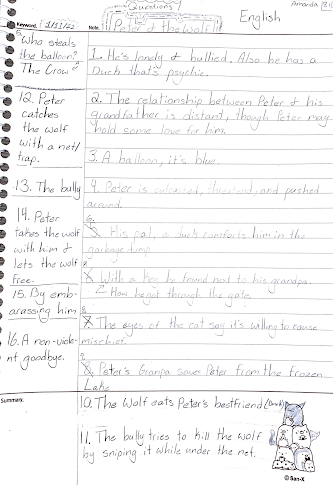 We watched the movie in class -- and I was surprised by how quickly they got into the story. I think what works is that the animation is so unique. It's not the standard, glossy Pixar style my kids are familiar with. It's a quirky, stop-motion animation-style feature. And the kids noticed the exciting way the animators brought the story alive, zooming in on the setting, a small town nestled in a somewhat cold rural landscape. The character of Peter is sufficiently adolescent, and the Grandfather and the boy's big fat cat serve as comic relief. There also isn't a lot of dialogue, so you have to pay attention to the visuals to follow the story's narrative pacing.
While watching the movie, students had to complete a worksheet, which included sixteen "right-there" viewing comprehension questions. It's just a way to keep them focused, and later, they turn it in as part of their grade for the lesson. As a teacher, I learned long ago that doing activities where students have to write and show their thinking is valuable. Not only is it an excellent way to show what you are doing in your classroom, but it also serves as a snapshot of students' overall thinking. I also like to use the Adobe Scan app to capture their work. So I have an archive of sorts.
Discussing Foreshadowing, Visual Imagery, Identity, and Other Themes
After watching the film, we talked about the movie. The first big English Language Arts point I wanted to convey was foreshadowing. And the kids definitely picked up on that one. There are images and references to wolves from the beginning, opening shot, and end. And another interesting discussion we had was why Peter let the wolf go in the end. I received several answers, but I remember one of the boys in my class commenting on how Peter understood the wolf. And I agreed, which led to a discussion about identity. If I say so myself, very much in keeping with my students' socio-psycho development.
Writing Activity: What Message Does the Movie Convey?
And finally, at the end of class, I told the students to pull out their notebooks, and they wrote independently about what they thought the film's message was, and I made them include details from the movie to support their answers. Having completed the viewing questions helped to jog their memories. As they left the classroom, they had to turn in all of their written work, and I had them each tell me orally the gist of their writing exercise.
Finally . . .
Do you teach short films in your classroom? How does it work for you? I'd love to hear your comments.
PDF Copy for Printing
Posted by Greig Roselli at 12:20 AM No comments:

110+ Listings — Let's Celebrate! With the Release of the Stones of Erasmus Educational Digital Download Catalog (as of Summer 2022)

In this post, I reveal how well-organized I am and as a result, you now have a bird's eye view of every educational digital download available in my TpT store. 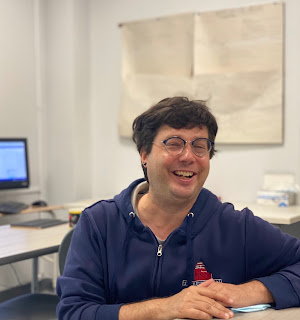 Hello, Teachers, and Friends,
One thing I love about Teachers Pay Teachers is that it has forced me to become more organized. I am not naturally an organized person. In Kindergarten, my teachers bewailed my lunchroom messiness and in middle school, I barely kept my Trapper Keeper intact. However, flash forward to 2022 -- and I have at least become more organized on TpT and in my own teaching practice.
Remember when you used to receive the Sears catalog as a kid, and you would circle in red marker the items you wanted and hoped mom or dad would notice? Well, you are an adult now, with a bank account, so you don't have to beg mom or dad. But, you can click the link and add to your wish list any of the items listed. Not going to brag, but I think you will be delighted. As recent buyers have said:

"Thank you for scaffolding the reading into manageable reading chunks and providing writing opportunities."

"Love [your] products! Very thought-provoking. I used [it for] distance learning with students in zoom class."

So, there you go.

Here is the complete catalog for the Stones of Erasmus store. Feast your eyes. 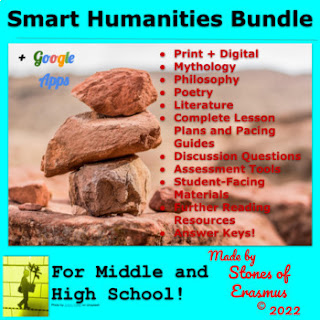 Note: This catalog does not include bundles (except for a few exceptions). Listings with an asterisk * are free.
Thank you for following me on my journey. Don't forget to leave a comment, drop a line at greigroselli@stonesoferasmus.com or visit me on my website at stonesoferasmus.com. 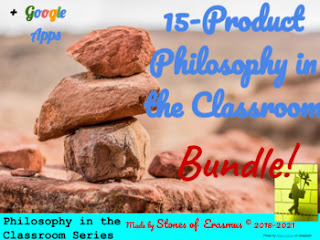 PDF Copy for Printing
Posted by Greig Roselli at 11:20 PM No comments: