In this post, I ask two family members from Louisiana to give their impressions of New York City. These are their responses.
When I asked my school-aged nephew what he thought about New York, he replied: “I think that it's like very crowded and a lot of people like foods there and the best place is probably the pizza. And it's probably the best food. Thank you for your time, everybody.”And then, I asked him to imagine what the city smelled like and felt like (using sensory details): “New York is fun and stinky and interesting, like a hot dog.”When I asked my seventy-something-year-old aunt what people in Louisiana think about New York, she told me a story: “Greig, I would say they think it's too dangerous, but when I went to New York with Uncle Raymond in 1993, that's the only place that I was able to go out at night shopping. Even in New Orleans, even when we lived in Chalmette, I couldn't go out at night shopping. Oh my God. I forgot how many years ago. That was probably twenty-odd years ago. But in New York, I could go shopping. We had a hotel near Times Square, So I was able to go up and down that street without any restrictions in the middle of the night. Do you know? And, um, you know, I never go at night, and Uncle Raymond never let me go anyplace at night.” 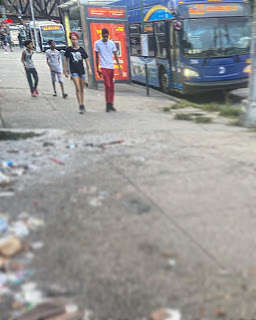 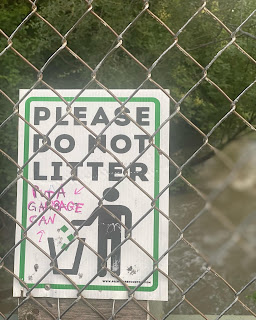 Photos (L) Three kids walk past a bus stop In the Bronx. (R) A sign advises against littering, but someone left an informative note.
PDF Copy for Printing
Posted by Greig Roselli at 3:00 PM No comments:

I’m a high school English and Ethics teacher. Sometimes I’m tired of being a grownup so I play with the book faces in my school’s modest library. Today, I’m covering an ancient pharaoh from ancient Egypt. Also, today is National Shelfie Day. 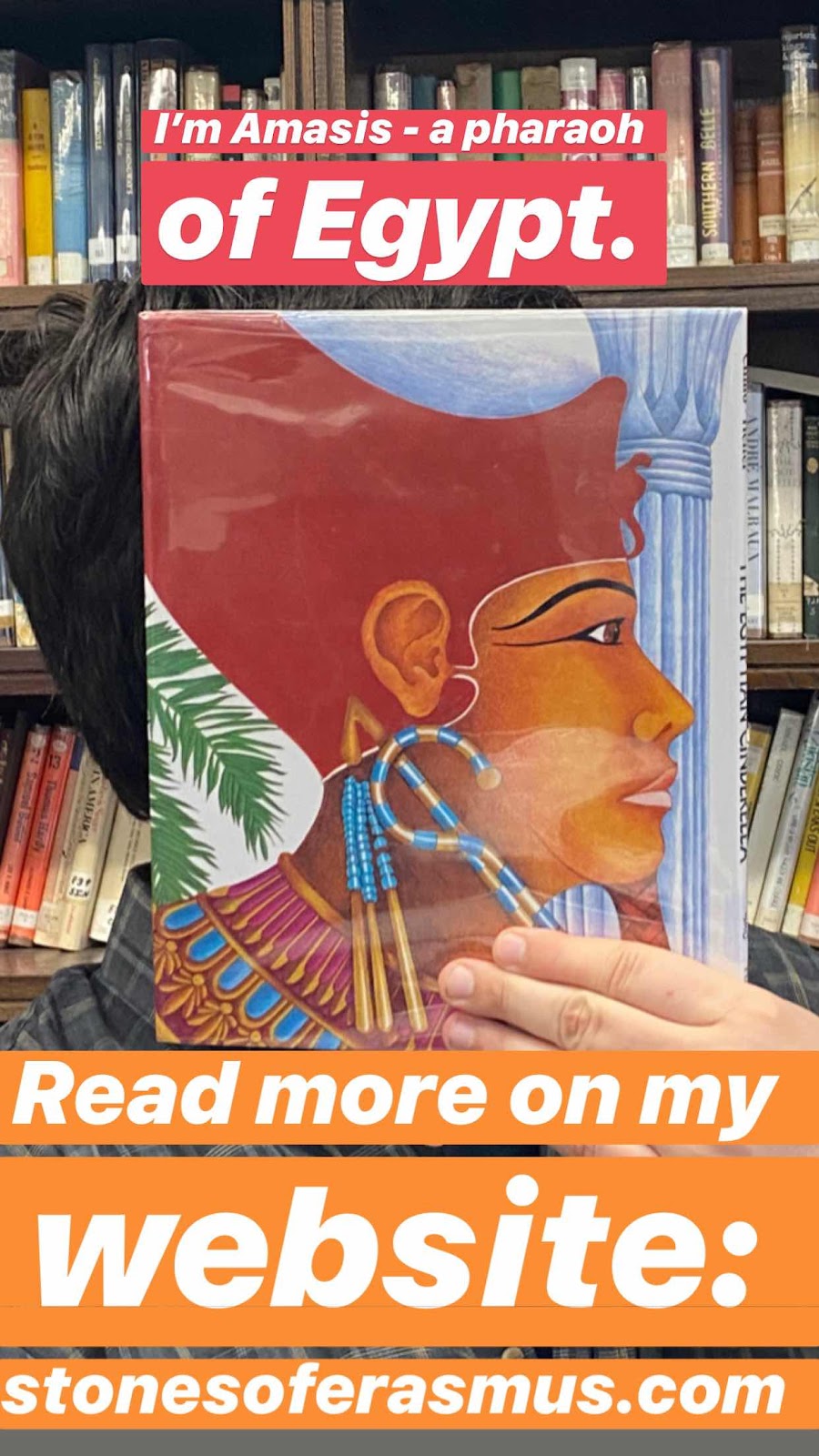 PDF Copy for Printing
Posted by Greig Roselli at 7:46 PM No comments: 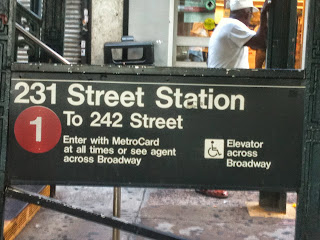 A Stopover in Kingsbridge
The Broadway local stations in the northern Bronx between Westchester County and Manhattan are elevated, reminiscent of the old els that populated most of the city before the inception of the subways at the turn of the century. Here in Kingsbridge, I can sort of get the feel of how the city used to be — sort of — I can imagine none of these buildings around me exist and instead there are rolling fields and hills that punctuate the countryside when this line was originally built. For my subway car reading, I've been diving into New York City Subway history. In one book, The City Beneath Us: Building the New York Subway

, I recently checked out from the Mid-Manhattan Branch library, depicts the 238 and 231 street stations. The pictures are eerie snapshots from the past. The difference in setting is striking. But the elevated train remains the same. I am on a time machine. The structure of the stations are unchanged. The same Swiss Chalet façade adorns the front (here it is inviting white!) and the steel infrastructure is unchanged in appearance. The difference is the emptiness that surrounds the Broadway local train. I can close my eyes and return to this spot a hundred years ago. Perhaps I am a Manhattan father with two children and a wife. We move north to escape the chaos of downtown and the typhoid and tuberulosis of lower Manhattan tenement living. Here, it must have felt like a spacious Western dream. "Don't fence me in!" The first train passengers more than a hundred years ago probably did not imagine the extent of urbanization New York would undergo. Or maybe they did. Because it did not take long for this area to rapidly acquire buildings and concrete. At one time, though, a cow could have taken a dump right here on the extent of concrete below me. A horse could have been crushed by a drunken driver in a Ford — right here. I take a swig from my Orangina and a tiny Dominican woman offers me a smile.

Northern Manhattan and north of the Harlem river still retain vestiges of the old that most of lower Manhattan has buried. The trains are still elevated, not below the ground; and the streets beckon an old-world feel. Even the name of this neighborhood, Kingsbridge, is antiquated, not Dutch obviously, but a New England name that fits comfortably alongside New York. Kingsbridge, New York. The name is lyrical. The space begs people to notice its own origins. Banners affixed to poles in the street cry out, visit Kingsbridge, "It's all under the bridge!" Instead of cows and horses, the sound of ladies softly alighting their feet on grass, I hear the rush of cars emanating from the Major Deegan Expressway, not far from where I stand, which snakes through the Bronx north-south. I am not really sure what Kingsbridge refers to, perhaps a bridge that once existed here but no longer stands. A quick Wikipedia search concludes that a bridge did stand here but it was covered up and replaced by the Duivet-Spuivel canal. For some reason I think of Neil Gaiman’s novel Neverwhere, of an alternate universe in the London Underground and imagine if Gaiman had written the novel here, Kingsbridge would have to serve as some magical portal to New York’s own Neverwhere. Maybe Van Cortlandt Park to the north would be a faun's playground. I think for a second how fun it would be to write a novel about the subways of New York as a fantasy. Gaiman might sue though. I put my idea on a cupboard in my brain. I can figure out my own creative slant. I'm sure of it.

Interacting with Locals and an Encounter with the Police
After asking her a few questions, which at first startles her, a middle-aged black woman carrying a leather satchel and an umbrella tells me Kingsbridge is a nice place. She points in the direction of Broadway and says something to me about the canal that was dug that replaced the original Kingsbridge. I tell her thank you and walk along Broadway. The heat creeps through the streets. The pizza I ate at Mario's still feels heavy in my stomach. I climb the stairs of the elevated platform and find a quite place to jot down notes in my moleskine.

A policeman from the 50th district stops me and asks me not to loiter. Either get on a train or keep moving. He’s polite enough, but there is an unnecessary heightened sense of authority in his voice so I board the Manhattan-bound Broaway local as quickly as possible. Seated on the train again, I remember just yesterday a New York Public Library security guard had asked me in not so kind words to not sit in the stacks to read a book. “Tables are for reading. Get up.”

Read more stories just like this one in my book of essays "Things I Probably Shouldn't Have Said (And Other Faux Pas)"
PDF Copy for Printing
Posted by Greig Roselli at 2:39 PM No comments: