There is no ‘Reel’ Mordred:

The Evil Child/Good Child Dyad in Excalibur, The Sixth Sense, and The Good Son

In the following blog post, I try to link the story of Arthur's bastard son Mordred, who in the Arthurian Legend, comes back to seize control of Camelot from his father, as an example of the "bad seed" trope in contemporary film and fiction. 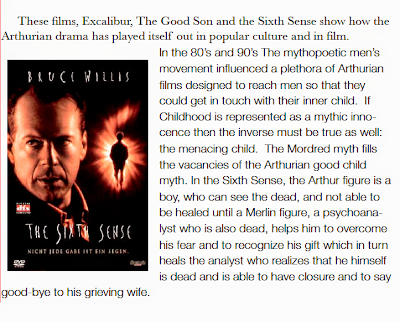 It is easy to see how much the Mordred story is edited, conflated, or even omitted in popular Arthurian retellings. Most film versions omit Mordred as in Disney’s The Sword and the Stone (1963) or Camelot (1967) or they conflate his story, like in Knightriders (1981), where he is Morgan, a bad-guy motorcycle nut, his name a mixture of Morgan Le Fay and Mordred. And of the Arthurian films that do include him, he is either: 1.) Arthur’s nephew or a knight "gone bad" as in First Knight (1995) or 2.) the incest taboo is breeched and Mordred is recognized as Arthur’s illegitimate son, as in Excalibur (1981) or the TV mini-series version of Mists of Avalon (2000) (Torregrossa 200-201). In films without mention of the incest plot, the incest taboo is sublimated into a villainous character who desires, at any price, to storm Camelot, to take Guinevere as either a wife or slave and to kill Arthur. Either Mordred is conflated into an evil nemesis that vies for Arthur’s throne, or he is seen as a son, but, universally as a bad seed. This bad seed element is what I am interested in here as an outcrop of a problematic good child/bad child dyad that popular tellings of the Arthurian tale have generated.
This illustrates at what length the story, even Malory, to some extent, avoids discussing the crux of the Mordred story, the “bad seed” part: which is basically a story of taboo desire between a brother, (Arthur) and a sister (Morgauswe) and the product of this desire, an evil child, (Mordred). The boundary is transgressed and the child born from the brother/sister pairing is marked as impure — hence, perhaps the name Mordred: a distortion of “morte,” the Romance derivative of the Latin word, “mortus,” in English, “death.”

In most cultures, a child made impure by a violation of the incest taboo does not bode well for the tribe. It marks death. From a Structuralist point of view, all cultures, in some form or another, have an incest taboo, for it separates us from the animals and makes us uniquely human — our rage or our sex drive is not mere animalistic fecundity, but we tend to inscribe meaning to our actions which precipitates limitation (Bataille 83). Most cultures include a narrative to limit transgression and also to speak about possible violations of the boundary as a cautionary tale. In other words: Don’t sleep with your sister because it will bring a taint on your house. Stories like this are powerful and interwoven into cultural narratives because the taboo is so strong, we need stories of its transgression to release some of the pent-up energy generated by its suppression.
But how we tell the story is what is of importance.

The story of Arthur’s son, Mordred, fits into this basic narrative of incest, not only as a historical figure but as a raw narrative-type fitted into whichever form of the Arthurian strand the artist wishes to take, whether he casts Mordred as a nephew or a son, or an evil traitor, the simple ingredients of the primordial story are preserved. The raw form of Mordred as an evil son, an irreducibly evil son, apparently, has become fodder for a retelling of the Arthurian myth that chooses to emphasize the mythological structure of the story rather than the anthropological structure. From an anthropological standpoint, the Mordred narrative tells of a transgression of a culturally inscribed taboo that needs to be dealt with within the society.
This anthropological, scientific viewpoint has been challenged by the mythopoetic, or Jungian view touted first by Joseph Campbell. In this view, Mordred or any character in the Arthurian narrative is a creation of mythic imagination, not necessarily rooted in historical reality. While, there may be cause to suggest that a person such as Arthur or Guinevere did, in fact, exist in some form of the distant past, the cause of their presence in history is not inherent in their facticity, per se, but in the raw mythological power that they exert on the human imagination.

Mordred, while the facts of his historical existence are in doubt, exerts a powerful influence on the popular imagination, especially in films that utilize the rhetoric of the Men’s Movement of the 1980s by such figures as Robert Bly and Sam Keen. The Men’s Movement addresses the so-called “crisis in masculinity” that was used as a counter-attack to second-wave feminism, that stated that there is something innate about woman and that womanhood ought to be celebrated and recognized, as inherently bound up with a woman’s own sense of self and power, represented in works like The Feminine Mystique by Betty Friedan. Men, by their own, admission, deny women of this acceptance of their womanhood by disavowing their political rights and metaphysical dignity
The Men’s Movement, or Mythopoesis, as it is sometimes called, countered this, especially in the works of Robert Bly, by saying that there is also something innate about men, but men have not been allowed to express their true feelings like women and are therefore just as much oppressed as women. Bly warned that men should not associate themselves too readily with women, lest they ally themselves with their interests, and only please their mothers and their wives (2). Writers like Bly argued that men should not only get in touch with their more sensitive, nurturing side, or their true selves, but their wild side, or their warrior side as an expression of authentic masculinity. This not only spawned a pate of men’s clubs and book tours celebrating men and men’s interests but also films have expropriated this mythopoetic rhetoric, often times to an inevitable disaster.
In Films, like Excalibur,, First Knight, The Sixth Sense, The Good Son, and the Star Wars films, the Mordred myth has been expropriated into a mythopoesis that reduces the problem into a good child/evil child dyad. If there is something to be saved in men today, the men’s movement suggests, it is our boys who are in the direst need of help. This emphasis on boys in need of help, seen in books by Michael Gurian and James Pollack, with titles like, The Wonder of Boys or Raising Cain: Saving the Emotional Lives of Boys. This frenzy (or panic) to save our boys from the clutches of soft feminism creates, ineluctably, what I call the Mordred problem, spawned in part by this duality that our children are either good or evil, right or wrong, soft or hard, gay or straight, legitimate or illegitimate, with the emphasis that right, good, hard, straight, and legitimate are the privileged labels. Mordred is a type of the “bad seed,” the bad label, or the evil child and his inverse, the good child, or the virtuous child.
Reinhard Kuhn, in his book Corruption in Paradise: The Child in Western Literature says that the evil child in literature stems from our fascination with innocence in the child and this innocence is corrupted by society (40-41). He says that evil children in books and films demonstrate “an insatiable appetite for even the most vulgar of such menacing children, and the viewing public has assured a similar success for the many films dealing with the same topic” (43-44). Kuhn remarks that the result of our fascination with corruption of childhood innocence has garnered a proliferation “of evil children on such a scale that one might fear it is they who will inherit the earth” (44).
The Mordred-myth generates such evil children bent on destroying the father figure, the mother figure — in fact, the entire family. The incest theme is usually downplayed in these films and the villainy of the child is emphasized. These films tap into the archetype of the evil child that seems to fascinate modern audiences. It also presents us with a problematic binary. Especially when seen in context with the recent rhetoric of a “crisis of masculinity” that deems anything not of the moral norm as suspect and thus should be expunged.

Click the link to read the rest of this post!!
Posted by Greig Roselli at 12:20 AM No comments: