Organized around a series of photographs taken in Louisiana, Greig Roselli writes a photographic essay evoking themes of home, childhood, desire, and loss. 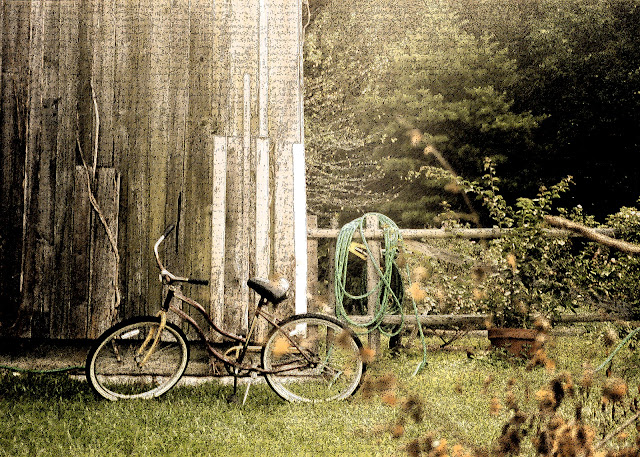 Figure 1. "Schwinn" 2005
Landscape Shot With Schwinn Bike
I took this particular landscape shot in front of an old slaughterhouse; now it serves as a greenhouse-cum-chicken coop about ¾ miles from the Abbey church where I live. I call this shot a “landscape” using a very simple definition: there are no people. One can have a landscape with people but I think their backs would have to be turned away from the camera, more like mounds than actual people. In this photograph, there is only the sense that “a person has been here” — the already noted bicycle and circular garden hose coiled like a snake and the potted plant point to this. The bicycle sits there as a kind of emblem — or at least that is how I envisioned it when I took this photo — to stand in for someone who was there but has left the frame of the photograph. Maybe there could be a part two for this photo with a figure standing in the place of the bicycle. I show people this photograph and they seem to gravitate toward the bicycle intuiting its connection to an individual person.
True Story (Sorta)
“Whose bicycle, they say?” and I say it was mine and I make up a story about how this was the bicycle I used to ride to work on and my friends would laugh at me because it was a woman’s bicycle. I would shrug it off and say that it made no difference as long as it got me to where I wanted to go. I parked my bike across the street from the restaurant where I worked, behind an air conditioning unit. I used to work at a seafood restaurant and my job was to prepare the crayfish and crabs for boiling. We would pour the creatures, their claws like thousands of pleading arms, into the seasoned water, get the heat going, and once they were boiled, we would serve up portions to the customers. After the shift was over — around midnight or one o’clock — I would drive back home on my bike even though there weren’t any streetlights; I would just pray a “Hail Mary” or just sing really loud to scare away the ghosts. This is a true story; I mix up the details in the telling. It was true that I would ride a bicycle to work, but it was not necessarily the same bicycle in the photograph. The story seemed true enough; it was not as if I were fabricating a story; the bicycle was an emblem for me; the bicycle told many stories. Considering myself a storyteller, I would tell variations of stories from this one photograph, taking elements of different aspects of life and bring it back to the bicycle: for example, my bike was a green Schwinn and it had been stolen one year when I was thirteen and I didn’t get it back until I serendipitously won a brand new bike at the county fair. It never did feel the same; or the time I rode my bike in heavy traffic without glasses; that was a tad bit dangerous; All of this was true, but they were superfluous to the artifact of the photograph of the bike taken above for that particular bike in the picture had no particular emotion for me. It was an old bike lying around the abbey that I had used that day to ride to the greenhouse. I took the picture with the bike in mind, though, and when I developed the photo I scanned it into my computer and applied a kind of matte effect that you might have noticed. I wanted to give the picture a painterly effect. I wanted to squeeze out the realistic parts of the photo — and yes I know this sounds excessively Romantic — but I wanted the picture to stand for something ontological: whether it be innocence or the journey or even experience. I think the Romantics did try to do this in the paintings attributed to Romanticism. But, they did it with Greek mythology. For example, the story of Daphne turned into a tree or a nature scene with dryads and nymphs at a still pool; the scene was too perfect; it was a landscape in a Platonic sense of the word. For, me, perhaps, that is what I was trying to get at in my “bike” photograph and which is why I made so many variations on the story without much moral dilemma. I wanted an image to stand for some kind of eidos that included my experience but somehow rose above self-absorption. For who cares about the story of someone’s bike unless it mimics something about life. The mimetic of the bike suggests the desire for freedom — the stories I told were certainly about freedom or the loss of freedom — so it was kind of a reification of desire I was looking for (which is only a dead desire according to Adorno) — a packaged photo that I could pull out to re-tell the story of an experience (my experience) but in the way of an artist.

Click the link to read the rest of this post!!
Posted by Greig Roselli at 9:21 AM No comments:

Salman Rushdie came to New Orleans last night to speak to a large assembly at Tulane’s Dixon Hall. If you don’t know already, Rushdie is a novelist known for Midnight’s Children and The Satanic Verses. He was placed on the Ayatollah Komeini’s “to kill list” because it was thought Satanic Verses defamed Islam. The fatwa against his life has been subsequently lifted, but it has not lifted the chatter that has circulated around the author and his controversial persona.
People Condemned Rushdie's Novel Satanic Verses Without Even Having Read It
At the event, Rushdie spoke about how people condemned his novel without even having read it, going so far as to recount the story of a man who had publicly protested his book, but later on, read the novel, and exclaimed, “What was the big deal?”  “Asshole,” Rushdie said. “Why do people who condemn books never read them?” The people who want to get rid of books are the same people who say, “I am not a book person”!  That is the ludicrousness of the world, writ large. Rushdie also told a story about how Stephen King called up his publisher after having read Satanic Verses and realizing it was a great novel, told the publishers if they refused to put Rushdie’s book on the shelf then he was going to demand they remove all of his book from publication and call ten other best selling authors and demand that they do the same!  Rushdie laughed when he told this story saying, “And now, my book has outsold theirs!  There is no justice!”
According to Rushdie, A Novelist Writes "Fictions" But Tells More Truths than Politicians!
He spoke frankly about politicians and how they do not tell the truth.  He said the novelist tells the truth because he is not ashamed to say in the beginning that his story is fiction! He spoke about the uselessness of fiction.  He said he was tired of the Utilitarian argument that novels have to be useful if they are to be read. Whatever happened to unadulterated pleasure? Alice in Wonderland, he said, is not a useful book. Its sole purpose is to create pleasure.  God forbid, anyone have a little pleasure!
Perhaps, people are threatened by pleasure.  Are we really like the Puritan who thinks in his heart and is distraught that somewhere, somebody is having fun?
Perhaps the role of literature is to open up the world just a little bit and to expand the cosmos.
Rushdie Makes Jibes About President Bush (And the Conservatives in the Crowd Squirmed A Bit)
Rushdie was witty last night.  He made us laugh. He jabbed Bush. And he made the conservatives in the house queasy.  I saw a politician in the audience, but I cannot remember who it was (maybe it was Melinda Schwegmann): We don’t have many Salman Rushdie’s in our culture today, though.  Gone are the days of the public satirists. Perhaps, you can still find them on Youtube in the likes of Chris Crocker or on television with the Daily Show but the likes of Kurt Vonnegut and Mark Twain are few and far between.  It is like when they asked Dorothy Parker to speak about Horticulture.  “You can lead a horticulture but you cannot make her think!” (You have to say that joke out loud to get it!).
A Man's Daimon Is His Ethos
I thought it was interesting that Rusdie was in New Orleans.  I think this was his first visit and I am glad I decided to attend. It invigorated me to hear a public intellectual speak who did not mouth the same tired babble over and over again.  I actually, got up and asked him a question. I had read an essay he had written on Heraclitus in Granta and he said his favorite quote from Heraclitus was "A man’s daimon (his character) is his ethos (or his fate)". So, I asked him, “What is Salman Rushdie’s daimon?”  He answered with another anecdote about him and his sister which I really do not recall the details because I was so nervous standing up there at the dais. It’s kind of nerve-wracking to ask a public intellectual a public question!

Posted by Greig Roselli at 7:11 PM No comments: