Click the link to read the rest of this post!!
Posted by Greig Roselli at 12:11 PM No comments:


On writing, and why practice makes perfect.


Developmental argument: Practice makes perfect. I look at stuff I wrote when I was thirteen and think, "who was that?"

Retrospect argument: I look at the stuff I wrote yesterday and think, "ain't perfect but better."
Words I tell myself: Experience contributes to the adage practice makes perfect.
Invasion of the Body Snatchers: Or maybe writing is simply creating several versions of oneself.
Psychopathology of Everyday Life: It is spooky to find something in a discarded notebook with your name inscribed at the top but the contents are alien to your very sense of being. 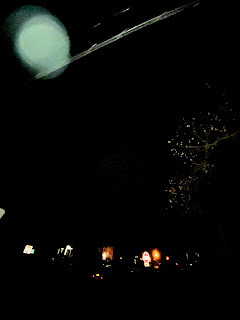 "Our life is one long struggle in the darkness; and as children in a dark room are terrified of everything, so we in broad daylight are sometimes afraid of things that are no more to be feared than the imaginary horrors that scare children in the dark."

Why Public Transit Must Be Integrated in New Orleans

The Airport is an Island

Last Spring I came home to visit New Orleans to attend a friend's wedding. At the airport, I had to rely on my friend to pick me up. There is no viable public transportation link from the airport to the Garden District of New Orleans. It is technically possible but I could not comprehend the bus schedules. Later I learned the E2 — the Airport Express — leaves the airport but takes commuters to the parish line — where Jefferson Parish and Orleans parish meet. From there an Orleans bus goes downtown, but not after 7:00 and not on weekends. I needed to go Uptown, not Downtown. And it was Easter weekend. When I lived in New Orleans I had an apartment next to the Saint Charles Streetcar line. I boasted to my family that I would buy a monthly pass and go to work on the streetcar. While this is technically possible — and my boast was simply because I thought it so green to take the streetcar -- the reality is the wait is long even during rush hours. The car stops every four blocks. While managing the center strip of the street, the streetcar has to manage intersections and very often the conductor would get off to buy a cup of coffee at the corner store. I think every time I did take the streetcar to work I was never late, but the commute usually included me walking to school until I saw a streetcar puff-puff puffing and I ran to catch it — which amounted to me walking ten blocks or more. Once on the car, I saw a student whom I taught, a wiry kid with a penchant for snoozing in my class. I was a high school teacher at the time. I saw him seated on the car bench and asked him if he lived near. He said no. He took the bus from Saint Rose and connected to the streetcar. His route is possible. But it is a rather long ride. He said it took him an hour and a half to get to school. Now I realized why he was snoozing during first period.


The Improvements of the RTA

Transit in New Orleans is improving. The bus stations now have glossy signage and the bus and streetcar lines have new number indicators showing their routes. The RTA, which is the transit authority that operates New Orleans buses and streetcars, has recently received new management and public monies after Katrina have boosted its ridership and capital improvements. If only the good things that were happening to RTA buses could happen to the rest of the region. I was also happy to see that the city was awarded Federal funds for an extension of the streetcar line to connect the Union Passenger Terminal to Canal Street. It is easy to see how much greater the city would be if it were to continue with such stimulating transit links.
Transport for New Orleans, a local transit advocacy blog, imagines a city of New Orleans with amazing public transit service. I reproduce the fantasy map here.
It depicts a high speed rail connecting the city to the airport as well as a public transit link connecting the northshore to the southshore. Wow. If only this map were reality. While most of the improvements on this map are a far fantasy, it seems to me that there is a surging interest in the city to improve public transportation. First things first. While it may be years before a light rail system is built in the city, it seems to me that there should be at least a comprehensive bus system linking all of the parishes.

It is an egregious oversight in public planning that there is no public transit link between urban New Orleans to the south and the suburban parish of Saint Tammany to the north. And as I mentioned above, the region's two urban parishes, Jefferson and Orleans, are linked at only anemic waypoints. I was reminded of this serious missing link during the evacuation of Hurricane Isaac that hit Louisiana and the Gulf Coast in September. An NBC news article reported that middle-class residents have the mobility and the extra income to evacuate on their own while the city's poorer residents must rely on public transit and public shelter to seek refuge. With the economic downturn nationwide, it seems to me that people in times of emergency look to public services like buses to get them to safety.
The city lacks fundamental transit links between its major population hubs. In 2011 it is estimated that 236,000 people live in Saint Tammany Parish while a combined total of 793,380 people live in Orleans and Jefferson Parish. Not only is there no link between New Orleans and its northern suburbs, there is also no public link connecting the State's capital, Baton Rouge, to either New Orleans or Saint Tammany -- or anywhere else. It is bad enough that during hurricane season there is a major disparity in who can evacuate and who can't -- it is also mind-boggling that the civil parishes totaling the bulk of Louisiana's population cannot make a more concerted effort to link its quickly growing northern parishes with those south of the lake.
A major reason for the gap is the large estuary, Lake Pontchartrain. The lake is traversable in two spots, one a twenty-four mile causeway linking the city of Metairie to the quaint lake town of Mandeville. Both cities are huge residential areas. The other link is an interstate highway that links Slidell to the eastern side of New Orleans. What this means is if I live in Saint Tammany Parish, stretched out across the shores of the lake, and I wish to commute to New Orleans, I have to either own a car or hail a cab. Most people who commute own their own car. 42,000 cars cross over the double-span bridge each weekday.

Posted by Greig Roselli at 10:59 PM No comments:

To be from the South. It's forever. The South is my ultimate frame of reference.

Some Yankee asks, "Why live down dere where it's below sea level?"

Anger is easy to erupt. But the Yanks don't get it.

Riding the B train I realize my heart beats to the rhythm of the Mardi Gras Mambo. All writers know that. Frank Levy taught me that.

It does not help that I start singing, "Mardi Gras Mambo" — a blonde hipster gives me a dollar.

I admire her Trader Joe's bag.

Hey, I say. We got Winn-Dixie.

And she thinks I am talking about some fucking children's book.
PDF Copy for Printing
Posted by Greig Roselli at 8:44 PM No comments: