When is the last time you used a working payphone? How sure are you that you can find one if your mobile phone goes dead? Do you have a quarter in your pocket?

Nostalgia is dangerous. Start feeling nostalgia, and suddenly, everything in the present is suspect. "Oh, I remember the days when you had to call someone on a landline."

But I like it when old-school technology still persists. I don't want to return to using payphones. They are clunky (and who has change, anyway?). And just when the conversation gets good, you have to add another quarter to continue the call.

You can find a working payphone in a few subway stations, strip malls, maybe a gas station in Duluth?

I used a payphone recently. I cannot remember why. It was when I was traveling. My phone was dead. I think it was in an Amtrak station (which I feel like is where I would find a working payphone).

Ironically, the school where I work has a payphone in the main hallway. But it does not work. It just hangs there on the wall. Hundreds of people walk by it. Heck. I didn't even notice it until like two years working at the school. I think it will become an art installation. Soon.

Fun fact: Payphones still exist. And one in five of them are in New York City! The Federal Communications Commission still regulates payphones. They still maintain a tip guide for using them and not get scammed when using a calling card. Remember those?

When was the last time you used a payphone?

Posted by Greig Roselli at 10:55 PM No comments:

Two people told me today, “You are always so positive.” The first was a colleague — and they always encourage me to be myself. The second was a student — 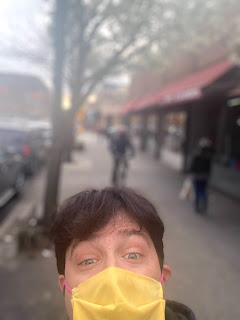 .... she came to me after class and was like, “Thank you for always being positive.” And I was like, “Well. I can embrace my sadness. But it's important not get distracted by the negative.” Like. I mean — I'm not oblivious to the Rainbow of emotions. But I like to infuse joy, especially with adolescents. It is the way I connect, and it's the glue to keep a classroom together. That and reading, writing, and arithmetic.

It’s been a stressful year — Covid-19. A disrupted school year. And a tragic time. George Floyd. Breonna Taylor. Say their names. And Asian Hate 😡. One of my kids said this week, “I don't like coming to school. I like school. It's just getting there. Should I bring mace?” I told him — “Your feelings are valid.” And we talked about strategies to signal for help if a hater ever comes at you. Pretend to talk on the phone. Don't travel alone or on a lonely street.All this hate takes its toll. It's toxic.What are you doing to help folks feel safe? What should we be doing? Am I right to spread positivity? Even when I'm sad or broken, or I feel like I can't find the energy to teach or do whatever. I got this.
Love you all!
.⁣.⁣.⁣.⁣.⁣#covidstories #highschoolenglishteacher#stopasianhateのヴィジュアルを掲出しています #stopasianhate活動#stopviolence #stopblackhate #stopasianhatenyc 😥😔💔😞😩 #positivevibes #love #stopasianhate❤️😔 #stopasianhate能看到 ✊🏽✊🏼✊🏾✊ #stoppeopleofcolorhate❤️#stopasianhate❌#stopasianhatecanada #motivation via stonesoferasmus.com
PDF Copy for Printing
Posted by Greig Roselli at 3:00 PM No comments:

Report from a Holy Saturday, Once: The Holy Fire

On one Holy Saturday – spontaneously – I decided to attend the Holy Fire liturgy at the Church of the Holy Sepulcher (The Church of the Resurrection, as it’s called in the West) in Jerusalem.

Islam has the keys to the door, Jews are honored guests, and a potage of Christian groups run this place, but this morning the Greek Orthodox had the worship space.  Because of the status quo set into rigid placement two or so hundred years ago by the Ottoman Empire, liturgies in the Holy Sepulchre are set according to a very stiff timetable — implemented before the Second Vatican Council. Hence, even today, the Latin’s celebrate the Easter Vigil at 6:30 in the morning!

After the Latin Patriarch and his train left with much fanfare, the Holy Sepulchre doors closed. A Moslem “guard” locked the doors again in a ceremonial “ladder from hole” routine, and we waited for the Greeks and Armenians to show up for their traditional greeting.  It was uncomfortable, waiting in line, waiting for the doors to open while hewn matrons with steely eyes yelled out invective to anyone who attempted to cross their space. The dazed English speakers could only muster, “What are you saying?” The women would only continue to spill out their sputter onto the crowd and me.

When finally the old, crackly wooden doors finally, slowly wheezed open again, the people, not a single file, piled into the Basilica, arms clutching their children hoping for a heavenly blessing.  Everyone wants a view of the aedicule, which is the structure believed to be the place Christ was laid to rest and rose again. It is not the most beautiful structure; steel supports cover the faded glory tomb – a phalanx of luminaries fill the entrance, making visible a gaudy icon on top of something or other.  I could only see glimpses of the tomb, as I was constantly, for four hours, smashed up against people’s backs and other parts – at one time, a woman’s long strand of hair found itself in my mouth.  The fervor heightened inside the Basilica as Armenian teenagers walloped and yelled, climbed the aedicule singing “fire” songs, praying for the angel to come and light the place ablaze.  I could only look blearily on from my curtailed privacy, people continually poking and prodding me.

This lasted for a very long time, while in the crowds, people collapsed from fatigue.  The church’s central section was throbbing with action that a Westerner could only gawk at – is this liturgy? I wondered.  What sort of liturgy is utter chaos?  There was no sense of order in this bedlam – if there was any, I could not see it maybe I had no faith. Only the person of faith sees the angel come down to light the flames, for hours processions followed the tomb around and around.

Periods of silence where it seemed nothing was going on ensued, only the people’s continual hum and a loud chant song from the tomb precincts.  The anticipation was growing, and I was hot and bothered – the sweat collected and the compression of people made my head swim.  I reminded myself I was about to witness a miracle.  For the Greek Patriarch entered the tomb to receive the holy fire from the angel.  He is ritually searched by a Moslem group and then enters – I think alone or maybe with an assistant.   No sound comes from the aedicule as the inner thumping of peoples’ anticipation grows.  Then it happens, suddenly, without a warning – a hand sticks out of pre-carved oval with a flame.  The whole church goes crazy – people are singing, waving their candles, and the flame approaches me like a fireball, for by now hundreds of people have lit their torches and quickly the place is becoming hot, the wax is flying around and soon anti-luminaries with handy sprayers violently extinguish the flames.  Some place their flame in a secure metal box to be taken home to the dinner table or on the next Greek Air flight!

In about five minutes the whole Basilica was bathed by a bequest from an angel – a sight to behold – I just could not believe it as I again joined the throng trying to crawl my way out of this enormous church where I had indeed experienced a miracle.  And when I got outside I saw holy flames, licking the streets of Jerusalem – Christ-like a Pandora shedding not chaos, but a wild radical mercy on his people.

Note: This post was originally written in the Spring of 2000.

Posted by Greig Roselli at 8:00 AM No comments: