In an interview with Kazuo Ishiguro, Pico Iyer listens while Ishiguro explains the plot elements of his “indecipherable” novel The Unconsoled (1).  The novel is about a pianist named Ryder who has an invitation to perform a concert in an unidentified town in Europe and stays at a hotel in town but he is not sure why he is there or if he has even been invited but he is afraid to ask anyone so he pretends his way through his stay.  Without a past or a clear future Ryder has to figure his way through the maze.  Through this clever set-up, Ishiguro says in the interview, the novel does not develop through the traditional conventions of flashback or chronological telling, but rather, the characters Ryder meets in the hotel are images of him or projections of himself through which we learn about Ryder’s story.  Ishiguro’s idea is that when people dialogue with one another they really do not listen to the on another or understand them but rather project their own image of themselves (either past, present or future) onto the other person as an extension of themselves.  Therefore, a person in a novel could be an extension of a past memory of the protagonist or a projection of his own feelings.  Either consciously or unconsciously, the same strange set-up is in Pamuk’s novel Snow.  Ka is a Turkish poet interviewing families of suicide “head-scarf” girls for an Istanbul paper, while also hoping to find a wife in the beautiful Ipek; so he travels to Kars, a border town near Russia, in the middle of a fierce snowstorm and ends up getting stuck there, surprisingly finding moments of happiness and able to write his first poem after four years of silence.  The novel is framed by the streets of Kars not only as a geographical border but the confines by which the novel develops.  One gets the sense when reading the book that everyone knows Ka’s innermost thoughts; his thoughts are transparent to everyone he meets, even the silliest incidents, like the newspaper publisher predicting that he will write a new poem and recite it at the evening’s National Theater production.  This is because the people Ka meet are extensions of him, as either visions of his past, or prospects for his future. 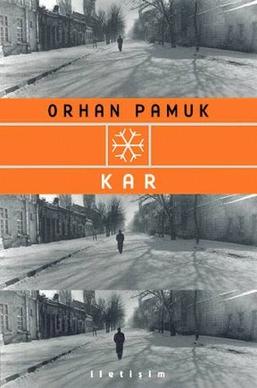 Necip is a vision of Ka’s past.  When Ka meets Necip in the snowy streets of Kars, the boy tells him that he is a messenger from Blue, an Islamic extremist hiding out in the city (65-67).  Ka is struck by the boy’s beautiful, large green eyes and his piercing, childlike trust and precocity that Ka likens to his own youth, which is why, Ka admits, he is able to warm up to the boy.  Necip even tells Ka that Ka only likes him because he sees in him his own youth (I can’t find the page number!).  This connection is mentioned a few times in the novel along with the weird announcement of how much time in hours and minutes remain until Necip will die by a gunshot wound to the head, destroying one of his beautiful blue eyes, the vision of the poet.  Necip is the boy Ka once was but also a sad reminder of who Ka could have become; while Ka is from a secular, bourgeoisie class from Istanbul, Necip is a poor, religious kid from the country, doomed to die, caught in the fight between the radical Islamists and the secular government.  Necip believes in God while Ka only sees God in the traces of snow lacing the streets of Kars with silence (the silence of snow is alluded to at least a dozen times but I am not really sure what it means, but maybe I am not supposed to know).  Necip wants to be a writer and eagerly shares with Ka a manuscript of a sci-fi story he is working on and confesses his unrequited love for Hircan (aka Kadiffe, Ipek’s sister) who is much older than he is; while Ka sees that the boy’s ambitions are idealistic, it is seems he is drawn to Necip’s idealism as a panacea for his own stubborn refusal to be happy.  Ka’s poem “Snow” which he recites at the National Theatre in downtown Kars is a mirror image of Necip’s own dream of the hellish landscape of hell; the two poets share a common muse, it seems, although their paths are radically different.  Pamuk is sentimental just enough to bring you right back to reality but not gruesome to the point of excess.
Ipek is Ka’s hopeful prospect for the future.  She is Ka’s dream for a future life in Frankfurt where he can write poetry and make love to a beautiful woman.  He even admits that he arrived in Kars, not to only pursue the story of the suicide girls for the Republican but to seek Ipek’s hand in marriage whom he knows is living in Kar’s Snow Palace hotel which her father runs.  Ipek is Ka’s wish for happiness, a wish he is ashamed to admit because he secretly thinks he does not deserve happiness.  He does not know Ipek but remembers her from childhood; all he remembers – to his slight chagrin – is that she is beautiful and recently single.  He lumps onto her all his hope for a future, as if the clearing of the streets of snow and the end to tribal warfare will be over with the consummation of a kiss.  Ipek blushes at Ka’s advances and even lets him kiss her but she refuses to let him make love to her while her father is in the same building.  Ipek knows Ka wants her because she is beautiful; and she is not angry with this but at the same time she diverts his comments about a future life with a smile and a remonstration to stay on the present task.
Blue is a strange mirror image of Ka.  Ka is a good guy who writes beautiful poetry, a little conflicted and lives with a guilty conscience but for the most part would not seriously malign another human being; Blue is a suave guy, young and articulate but sinister – at least to me – in his reasoning.  He is sensitive like Ka, but missing moral aptitude and a true sense of “what’s going on”.  Blue is the fundamentalist side of Ka.  I guess the Sheik falls into this category, but the Sheik represents Ka’s own theological doubt and uncertainty about the existence of God; Blue is Ka’s literal approach to the world to erase the poetic, natural beauty of Ka’s lyrics.  Blue tells Ka not to report back to the West what he writes about the suicide girls.  Blue wants to silence the Ka within him.
So far I can only articulate well enough Necip, Ipek, the Sheik and Blue as projections of Ka but I imagine all the people Ka meet are versions of him.  Kars is like a winter wonderland, a mazy kind of place and a fragile dream; violence happens; things do not look good for the next half of the novel once the snow stops and forces will be able to move around freely.  It should be interesting to see what kind of Ka emerges from this place – or if he ever gets out.  It makes me sad to see that Necip will die, but maybe this is part of Ka’s journey – the death of childhood.  I don’t know.  At the end of this article, I don’t think I like my thesis anymore, but it helped me to do a close reading of the text.