Stones of Erasmus Television Review — Doctor Who: Flux, "Village of the Angels"

In this post, I write about the fourth episode of Doctor Who: Flux, "Village of the Angels," that aired on BBC America tonight.
Reverse the polarity of the neutron flow!
I suppose you are a fan of the Doctor? Right? The Doctor is amazing! One of the best shows in the history of television! In any case, you might have noticed that when the Doctor is in a pickle — such as in tonight's episode, "Village of the Angels," — they can get out of anything. Shouts a few lines about reversing the energy of something or other —  as the following fantastic supercut from DoctorGeek illustrates:

How do you sum up the British Sci-Fi television series Doctor Who in a few sentences?

The Doctor is a Time-Traveling Alien

The Doctor is an alien time-traveler who travels in a broken time machine that has been begrudgingly stuck in the shape of a British police box. The Doctor almost always has an earthling companion, and he (or she) has a penchant for the human beings of planet earth. The show is at its heart a story about saving the heart of humanity — seen through the perspective of someone who is not us — but who is madly in love with us, silly, stupid, harmful humans. In tonight's episode, part four of a Dr. Who mini-series entitled The Flux, the Doctor meets a devastating bind; by saving the life of a human, she falls into a trap. And viewers were left on the edge of their seats with quite a crazy twist.

The Doctor is about to find out more about her past — more about the past that even pre-dates the narrative history of the show itself, the past the Doctor lived before they were our Doctor! The show has toyed with this idea for a dozen episodes so far, with the big reveal in Season Thirteen that the Doctor is not indigenous to the race of the Time Lord — the race they thought they were — but a "Timeless Child," whose regeneration properties the Time Lords retrofitted to their own purposes.

And much of the Doctor's deep past on Gallifrey was wiped out from their mind — and what we know of the Doctor, as television viewers might be just a glimpse of a cosmic history of a character who already seems larger than life — so I have to say I am excited for the next two episodes of the show.

Can the Doctor Escape the Weeping Angels and the Division?

Will The Doctor be able to get out of this pickle? How will her friends get out of their pickle? Last season ended with the Doctor imprisoned by the Judoon and Jack Harkness came to the rescue — but I am not so sure the Doctor is going to escape Weeping Angels so easily. And then there is the Division. Who are they? And how much will they reveal about the Doctor's past?

Are you a fan?

Let me know your thoughts on tonight's episode in the comments.

PDF Copy for Printing
Posted by Greig Roselli at 10:27 PM No comments:

As I sit on a platform in Grand Central Station, I muse on the binary between being talkative and silent and observing.
Sometimes I sit. And watch the people. During the week, as a teacher, I’m consistently talking and some such. To find me quiet on a workday would be an anomaly. Ask my students or my work wife, Amira, aka @dyspraxic_nightmare. That’s why on Sundays, I like to observe. And that’s why I chose today to sit and watch for a bit on the 42nd Street Shuttle platform that carries straphangers to Times Square. This weekend the 7 train is not running in the city, so the shuttle is crowded. The Metropolitan Transit Authority (@mtarecently) renovated the platform area, so it’s spacious in that helpful way good design tends (to do). The more, the merrier? Is it stoic of me to take it all in? Or am I a hedonist — greedily choking down a ginger-vanilla flavored Diet Coke? Let me know in the comments. I’ll respond.
⁣.⁣.⁣.⁣#architectural #shuttletrain #bigapple#grandcentral #grandcentralstation#grandcentralterminal #history #maintenance#mars #mechanic #newyorknewyork#nycphotographer #nycphotography #shuttle#streetsofnewyork #timessquare #trains#urbanlandscape via stonesoferasmus.com
PDF Copy for Printing
Posted by Greig Roselli at 10:30 AM No comments:

What do you eat for lunch at school?
Pizza Face. What you looking at?
*
*
*
*#pizzaface #teachersofinstagram #lunch #school
PDF Copy for Printing
Posted by Greig Roselli at 10:08 AM No comments:

Fall Teaching Diary: After a Quarter of the Year Teaching (On the Hinge of the Covid-19 Pandemic) 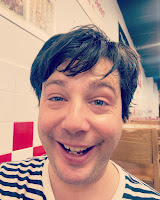 I am a high school English teacher. But, in this post, I don't talk at all about teaching. But if you want to check out my store on Teachers Pay Teachers — it's lit! I took a selfie while waiting for a burger at the Five Guys on Fifty-Something street in Manhattan. Then I went to see a French film at the Museum of Modern Art — L'amour Fou, directed by Jacques Rivette. I knew nothing of the movie, except that it was an artifact of the Nouveau Vague — and its running time was well-over four hours. The movie's images and set-up captivated my imagination. I only once became anxious about sitting in the theater for that long. The movie is about the break-up of a theater director guy and his girlfriend, an actor (performed by by Jean-Pierre Kalfon and Bulle Ogier). The film cuts between life in their Parisian apartment, scenes from rehearsal of the play Andromaque, and a documentary film crew filming the director's rehearsals. Lots of talking. And improvisation. So it feels natural. Something that a long-run movie does for the viewer. And the scene where the couple has a Dionysian tear-up of their apartment was fantastic. And then the moments when the guy was a total masculine unsympathetic man — I didn't care for that much. The focus on the female character was my go-to source of enjoyment. Hooray! I watched that long French movie. And then I went home and became anxious because I was looking to move to a new place. I move on December First, and I have no idea where I will end up or with who. Long story short — I decided (and my current roommate) agreed that our time was up. We divorced. Amicably. Kind of like in the French movie — except my roommate is not my lover. *Laughing out loud* I plan to move to another place in the neighborhood — in Jackson Heights, Queens. I like the environs even though it is a tad boring. So wish me luck and let me know in the comments if you have ever seen a French film that you liked and why.
PDF Copy for Printing
Posted by Greig Roselli at 9:01 PM No comments: