Poem: "The Pope and Mr. Murdoch"

Others say the pope should quit
to a monastery
to live out the rest of his days,

but I say look at the gnarled hands that scoop up soup on
a Saturday afternoon at the old folks home,
insistent on doing it himself, murdoch says,
dribble of reason coagulates on the tip of his chin

and the pope rolls on like murdoch,
both stubborn in their resolve,
clutching oversize spoons,
suffering from influenza

and doesn’t he look beautiful
sitting alone during bingo,
munching on fried rice
that I had brought him
despite the MSG −

once a six pack −

and now he asks the orderly for a Splenda,
which he brings −
he tears open the package himself,
as if following a medieval rubric,
gingerly pouring the contents into his mug that reads:

what do you get when you work like a mule?

stenciled across the porcelain
in a marker felt type.
Download an Image File of the Post Here
© 2005 Greig Roselli
Posted by Greig Roselli at 3:39 PM No comments:

Poem: "when i get home from work" 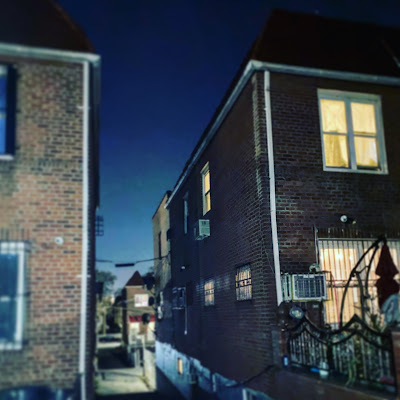 so i can breathe again

before easily letting go of the ignition,
sighing as the car dies,

having heard the cries of the kids splashing in the pool,
i realize i have not yet sloughed off the ink of my nine to five,
not yet ready to slip into this domestic ilk,
so i breathe again,
feeling the in-between-different-things feeling,
the uncomfortable transition from work to home:
the unique expectations,
the feeling that I still have not yet left, that i am somewhere else and part of me has run ahead of myself,
stuck somewhere on the corner of eighth and palmer,

unable to make a distinction between human resources
and the simple question of do you love me or not
can you help me with my homework
can you talk to me about this
can we talk about this
worrying about if the silence emitting from the backyard
is one of my kids drowning in the newly chlorined pool
or if mark, who is making supper for us all
really needs my help or his own space

so i breathe again,
letting greg catch up from his jog around the block,
his dress shoes and socks on top of the kitchen table;
the concentric circles of reality: the kids are inside, dry and
by the time the scrambled eggs and jambalaya are done on the front burners I can reset the clock, expectantly