Sharing The Myth of Sisyphus With Kids: The Original Rolling Stone

I’ve been teaching Greek myth to a class of 8-12-year-olds since February, and it’s been so much fun, hearing what the kids have to say about myths when they process the psychological insights that I’m able to share with them. One of the primary themes of our class has been how and why the myth is still relevant today, thousands of years after these stories were first told. A particularly useful recent lesson was on the myth of Sisyphus, which is such a great metaphor for human struggle. 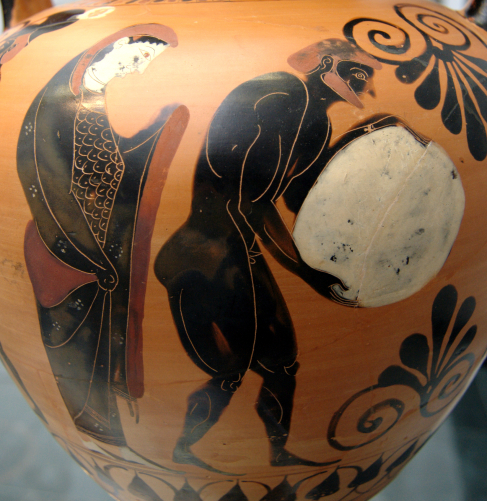 The Myth of Sisyphus
Sisyphus was a Greek king, in the evil trickster mold, who found trouble with Zeus when he traded his knowledge of where Zeus was cavorting with a river nymph to her father, in exchange for a spring of pure water for the people of his kingdom. In anger, Zeus had Sisyphus carried away to the underworld, but once there, Sisyphus tricked Death into wearing his chains. No one could die until Ares released Death and gave Sisyphus to him.

Sisyphus tricked Death once again (Death must not have been the brightest guy), persuading him that since his (Sisyphus’) wife hadn’t performed the proper funeral rites, he must return to the upper world to correct the situation. Once there, of course, he lived happily for another 50 years or so.
For his offenses against the honor of the gods, Sisyphus is punished by being forced to push a large rock up a steep hill, only to see it roll back down again. He must trek down to the bottom of the mountain and start pushing still.

French-Algerian Writer Albert Camus Reinvents the Myth of Sisyphus for Modern Readers
Camus writes about this myth in his seminal essay, The Myth of Sisyphus, arguing that Sisyphus’ fate is the fate of every human. Every day we must do the same tasks over and over; going to work, cleaning our homes, making our meals. We roll the rock up the hill; each day, it rolls back down, and we must start again.

However, Camus argues, Sisyphus is not truly cursed, because he isn’t unhappy with his fate. The gods can force him to repeat this task over and over, but they can’t force him to hate it. He is content, and therefore Zeus’ punishment has failed.

Teaching the Myth to My Kids in the Classroom
When I explained all of this to my kids, it was refreshing because they asked brilliant questions. They always want to know why the characters in Greek myths didn’t make different, better choices. One question that came up: why doesn’t Sisyphus chip away at the rock to make it smaller, make it easier for himself? I compared that to working less hard on studying for an exam and getting a “C” instead of an “A”. You can always take steps to make things easier for yourself, but you’d be cheating yourself at the same time. They got it, and it was really cool to see them getting it.
PDF Copy for Printing
Posted by Greig Roselli at 1:47 PM