Why is Pope John Paul II in his encyclical Veritatis Splendor so hard on  "teleological", "consequentialist" and "proportionalist" ethical theories?
John Paul II in Veritatis Splendor places emphasis on the good rooted in a divine, or eternal law.  In saying this he is advocating a moral system based on the principles of Natural Law Theory, even though in the encyclical he states that the Church does not support a particular theological or philosophical system, it is precisely natural law that he advocates in this encyclical.  The Pope doesn’t like the systems he calls “teleologism” and “proportionalism”.  About Teleologism and Proportionalism, he says, “Such theories however are not faithful to the Church's teaching, when they believe they can justify, as morally good, deliberate choices of kinds of behavior contrary to the commandments of the divine and natural law.” So, again, it seems John Paul II doesn’t like it when a moral system does not place commandment over love, for example, or personal responsibility.  It makes sense that he would argue in this manner, considering the Gospel passage he chose to set the stage for this encyclical, the story of the rich young man, which he uses to set up the standard for moral norms.  The Pope wants to place certain ethical norms in place, based on an ethics of divine commandment.
Using "Object - Act - Consequence" When Evaluating Moral Decision-Making
The Pope tries to work out a system that claims certain actions are evil, because their objects, in of themselves are evil. He claims that the so called proportionalist and teleological systems do not claim the “object” of an act — such as contraception — as evil in of itself, but instead attempt to examine the intention or circumstances of the act, invariably “letting people off the hook”.  For the Pope, an evil act is evil, regardless of the circumstances or intentions. For example, contraception is evil, because the object of preventing life to form in a woman’s womb artificially is always an intrinsically evil act — even though in Humane Vitae, Paul VI tried very hard to steer clear from such wording, the Pope seems to have no qualms in doing so.
Is There a Middle Ground in Moral Teaching that Still Stays True to Catholic Teaching?
It seems to me that instead of point-blank condemning these moral systems the right thing to do would be able to form some kind of compromise between the two or to discover a moral theologian that seems to be able to form a really good systems based on something rather than the object in of itself and still remain true to Catholic teaching.  I myself do not consider myself a proponent of Natural Law. I am too Platonic, too much of a Romantic, to get into the Aristotelian flavored ethics of Thomas. Although, it seems to me the Pope should be more like Thomas in attempting to incorporate “pagan” ideas into Christian thought.  Maybe there is something good out there that we really have not integrated well into our Catholic moral teaching. If Thomas could do what he did with Aristotle, why can’t we do the same with Existentialism — or even Phenomenology?

Are All Immoral Acts Equal Evil?
The Pope is a phenomenologist, I understand, but this encyclical does not seem to be written in a phenomenological vein, instead, it is much more steeped in the language of law and norms, especially in regards to sexual ethics. Wouldn’t it be okay to sanction certain objectively evil acts?  Doesn’t the church in a way use proportionalism when it attempts to justify war? I may be wrong, but it seems that the Pope is unyielding when it comes to matters of sexual ethics, when in fact, the parable of the rich young man is more about wealth. There seems to be a trend in moral theology that condemns without reserve evil acts such as abortion but allows wiggle room for war and deportation, for example. Again, I believe we should be able to reach a compromise.
On Some Criticisms
When I read Veritatis Splendor I also read Häring’s criticism in the Tablet.  I also looked at op-ed pieces that were written at the same time and was amazed at the flood of criticism.  Melina is right; most of the critics focused on chapter two of the encyclical, the part about the sources of Moral of Theology and intrinsic evil and not on the other chapters.  Chapter two of the encyclical is the most important part of the encyclical, I agree, but Melina argues that the document should be looked at in its entirety.  Melina wants renewal in Moral Theology too, new Gospel wine, a new, comprehensive outlook yet profoundly traditional (6).  Melina knows that one cannot get rid of the the moral norms but at the same time he realizes that morality should not be governed by a legalism so prevalent in older systems.  There has been a “rupture of the bond between freedom and truth” and there is a crisis in Moral Theology.
The subject has been fractured and takes on the guise of whatever social environment it finds itself in.  The fractured “I” is not truly free because it is bound to the truths of disconnected moral systems, never really able to “become a free subject of action”.  He points a finger at the bourgeois society of the “rich young man” as the result of the shipwreck in morality.  He also sees technology as destructive to man when disconnected from conscience.  He quotes Heidegger and Rabelais.  Our computers and super-fast jets are nothing without conscience.  I passionately believe this; that technology can remove us from a “connect”, not only from a guiding conscience but from the connect of the other as well, thus a disconnect from God.  I am reminded of Fahrenheit 451, the novel about a dystopia where firefighters burn books to keep people from thinking and feeling.  Maybe there needs to be an embrace of the more profound questions of human existence, rather than just “What must I do”?

How is Melina going to recontextualize Moral Theology yet remain profoundly traditional?  It seems he is going to bring in the virtues to put together the pieces of the shattered ego.  I don’t know how he is going to do this, but noticing that he has already quoted Alistair McIntyre (After Virtue) and C.S. Lewis and Aristotle in the first thirty-three pages I can see that Virtue Ethics will play a large role in resurrecting the fragile “I”, the wounded subject that seems to be the cause of the crisis in Moral Theology.  He will also bring in the necessity of community in creating a moral realm that is aesthetic and good.  Beauty is necessary for salvation, I believe.  Beauty is the splendor of truth.  If we lose the beautiful then we have lost humanity.  If we lose the community, the need for friends, that Aristotle so beautifully wrote about in the Nichomachean Ethics, then humanity will surely be at lost, no matter how technologically advanced we become.  Melina asks a beautiful question that I hope he expounds upon: “What kind of community will help me to attain the values to which I am called”.  I get frustrated in thinking about what I should do; I am asked about what I do in my life, so much so, that I wish sometimes people would ask me, ‘how will you attain the values to which you are called’?  There has to be a return to the virtues, to an aesthetic, and a re-tethering of freedom and truth, I agree and the moral life must find a home.
But, still, I wonder what he means by remaining profoundly traditional?  He mentions that he is going to address the nexus between freedom and truth, which may bring a profoundly traditional Moral Theology, yet, still I do not know what he means by that statement.  He is also going to bring in the connection between faith and morality.  I can see how this will also be profoundly traditional because Melina does not want the attitude of faith lost to morality; he wants to affirm that to believe is also a profoundly moral assertion.  So, I hope that these books provide some insights into bringing back the human family, so we can more authentically say to one another, “What?  You too?  I thought that no one but myself  ...” (32).

PDF Copy for Printing
Posted by Greig Roselli at 6:15 PM No comments: 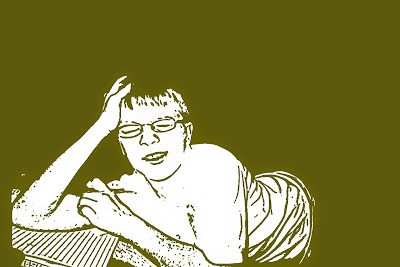 so I gingerly removed the spectacles from his face,
so he wouldn’t roll over in his sleep and crush the glass,

so better save him now, while I can,
similar to the bike ride earlier that day

when I tried to save him from his cold dash into the night and he consoled me,
indicating the efficacy of street lights and the

anymore that the sun was sinking into the river, drowning away
like a melting orangcicle,
bodies bobbing on the surface of its tan waves, white foam froth

foaming at its Cerberus mouth −
that’s the mississippi for ya −

and we raced the rest of the way back
and I masked my anger that he had won;

I placed his glasses on the night stand,
retracing my steps back to the guest room to gather my stuff,

wondering if I should have just let his glasses dangle there on his face, wondering if in the morning he would be bitter that I

foolishly sought to save him
again,

or would he forget