Homer, Book One of The Iliad
A review of the first book of Homer's Iliad, the epic story of the Trojan War.
In Medias Res
The story of Achilles begins in medias res, in the middle of things, nine years into a battle between the Trojans and the Greeks. The poet does not give the historical background to why the war started, why the war has lasted so long or any real information regarding the conflict between two Mediterranean nations. The story assumes much-acquired knowledge of the Trojan war and reads more like a psychological thriller than a typical war story. To get a background story on the Trojan war, students usually peruse Edith Hamilton's classic Mythology - there one can read the background events that led up to the war, including the Judgment of Paris, the famed allegory of how the war began. Also, there is evidence that a Troy may have existed in the Bronze Age; the story of Troy may not be entirely mythical.

The poet is silent, however. His main focus is on the humans and their immortal counterparts, the gods. The Iliad should be appropriately renamed the Rage of Achilles. Why? Well, the poem resonates with the theme of anger. The hero Achilles spends pretty much half the book resentful and bitter. The gods are pissed off at each other as they mock men. Anger, resentment, rage, bitterness, loss, are bound together in a tight-knit stocking. The muses, invoked by the poet as inspiration, act as furies in the poem's opening sentences: "Rage, goddess."


The god quaked with rage (1. 54)
To compound the rage, the poet traces the genealogy of Achille's resentment in the epic's opening lines, zoning in on the rage of the god Apollo, incited by Agamemnon's refusal to give up his slave girl, Chryseis, back to her father, a priest of the archer god Apollo. The father pleads with his god to seek revenge for Agamemnon's refusal to give her back. In a second act of rage, Apollo rains down disease arrows onto the Greek camps (sometimes called Argives or Danaans). The Greek soldiers die of the plague, their corpses burned on the beachheads. The men are tired and grumpy. They want to return home, having fought abroad for nine long years. Agamemnon is stubborn. He is also very shallow. Not only does he refuse to give back the girl to her father, he mocks her father, he makes fun of his beliefs, and he tells him he will never give the girl up; he tells her father: "I will keep her till she is old and gray." A slave is a possession. A slave is something to have; a slave is not a human with a soul. Agamemnon's act of defiance is perhaps worse because not only does he insult a man's daughter, he insults his beliefs, and his future, instilling terror in his heart. Agamemnon will not give up his possessions (honor) even if it means the wrath of a god (belief) and the death of his men (a refusal to see mortality for what it is). Agamemnon reminds me of a corporate boss, at the top of the corporate ladder, who will not give up his house in the Hamptons, his Christmas bonus nor his private jet, even though his company is falling into ruin. Agamemnon's motto could be "the more I own the more I am."


A dispute among children
The core plot of Book One is a childish dispute between Agamemnon and Achilles. Achilles speaks out against Agamemnon. Achilles's argument is simple: why should the boss get the loot, and his men left with nothing? Agamemnon does not listen. Instead, he punishes Achilles for insubordination. He sends two men, not he, to take away Achilles's own slave girl, Briseis (notice the passive aggression here). The dispute is the same as two children fighting over a toy. "I want it! It's mine! No! It's mine!" When both cannot get what they want, one cries out, "Well, fine! If I can't have what I want I just won't play, then!" Agamemnon refuses to give in; Achilles vows he will never fight again and goes in his tent to sulk, comforted only by his best friend Patroclus. And Athena. 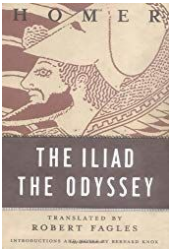 The boy with fiery hair (1.232)
It is perhaps not without coincidence that Achilles is depicted as a lad with fiery, red hair, a synecdoche for his rage. Achilles feels entitled. He does not identify with the rest of the soldiers. He has his own private tent; his own servants; others attend to him; he is like a god. Or at least, that is how he perceives himself. He thinks of himself as an immortal. A god should never suffer! So, when Achilles suffers, he acts like Apollo, and surges with rage, his hair fiery red, ready to slaughter Agamemnon on the spot. Of course, Athena, his protector, stops the blade and convinces him to think things over. How else does a boy with a temper tantrum appease his rage? He appeals to his mother, of course!

Thetis, the old man of the sea's daughter
In perhaps the most poignant scene in the book, the poet paints a picture of the tragic hero alone walking along the seashore, imploring his mother, the sea nymph Thetis to avenge him. The scene of the plaintive boy warrior on the beachhead is an interesting contrast to the enraged, murderous Achilles who has slain thousands of Trojans, inciting fear in the hearts of men. Of course, his mother hears Achilles prayers and promises to ask almighty Zeus to exalt his son. Notice what Achilles asks for: to be exalted. Achilles's prayer is to be raised up among men even though he is merely a man. The tragedy of Achilles's prayer is that his mother does not remind him he is only a mortal, not capable of being more than he actually is. Achilles is like an adolescent who does not realize that he is vulnerable. He is like the kid who gets on a four-wheeler and recklessly rides it dangerously through a mud track without ever thinking that possibly he may get hurt. Achilles's problem: he is like the kid on the four-wheeler who thinks an impossible stunt will not break his bones.

N.B. The edition I use is the Robert Fagles translation published by Penguin Classics (Deluxe Edition)
PDF copy for printing

Posted by Greig Roselli at 3:45 PM