Quote on Beauty and Difference from the Classic Series of Dr. Who — "The Genesis of the Daleks" (1975)

"Why must we always destroy beauty? Why kill another creature because it is not in our image?" I keep the classic series of Dr. Who on replay at my house. I want to catch up on episodes I have missed — and I particularly like the Tom Baker episodes. He's the fourth incarnation of the Doctor, and he portrayed the character from 1974 to 1981 (the longest-running tenure of the role in the show's history). 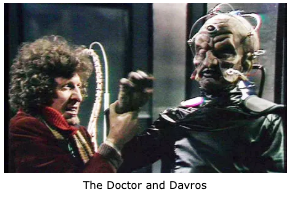 The Genesis of the Daleks:     In the Terrance Dicks written chapter entitled "The Genesis of the Daleks," — the Doctor is sent back in time and space to the Dalek planet Skaro to prevent war between humans and the Dalek race from occurring in the future. The episode is an origin story of the Daleks —  a race of boxy, dangerous aliens. The Daleks have proved to be the doctor's most fearsome, persistent nemesis. With their vibrating cry of "Exterminate!" it is not a hard extrapolation that the Daleks are meant to represent the extreme version of what happens when a species goes all-out bonkers with racial superiority and hatred of difference. The Daleks annihilate difference and vouchsafe sameness in the universe. There is a twist in this episode, however, since the Doctor learns that the Daleks are the creation of a figure named Davros — a humanoid with a Dalek-shaped lower body. The Daleks are the master idea of a diabolical mastermind. Are you getting a Hitler-tingle? Well. You should.
Are Humans More Destructive or Creative as a Species?
As per the course of a Dr. Who narrative — there is a lot of meaningful talk about what difference (and how humans deal with that which is different) means for the future of humanity. Are we more like the Daleks — whose prime directive is to kill all lifeforms, not like their own? The writers of the show make obvious nods to humanity's own track record for acting like Daleks — think of violence enacted in the name of racial superiority or the banal way in which humans become exterminators under certain conditions — think of the gas chambers that annihilated Jews, homosexuals, people of color, and other so-called dissidents — or the way guards at Guantanamo Bay tortured and debased human beings under their supervision.
A Trenchant, Relevant Quote
One scene in particular is a miniature of the grand themes Terrance Dicks is hashing out in the show. In a brief episode of capture, Sarah Jane Smith, one of the Doctor's classic companions, is considered for extermination. But a voice cries out. And asks a question: Why destroy beauty? Why destroy another creature because it does fit into one's own image?

(Sarah is out cold as a muto strokes her face.)SEVRIN: She's beautiful. No deformities, no imperfections.GERRILL: She is a norm. All norms are our enemies. Kill her now for what she's done to our kind.SEVRIN: No, why? Why must we always destroy beauty? Why kill another creature because it is not in our image?GERRILL: Kill her! It is the law. All norms must die. They are our enemies. And if you won't, I will.

Dr. Who "Genesis of the Daleks" Original Airdate on BBC television: March 8, 1975 / image from the BBC
PDF Copy for Printing
Posted by Greig Roselli at 1:56 PM