So, I wanted to make an animated GIF to represent teaching in May - and here it is (see above).
Click the link to read the rest of this post!!
Posted by Greig Roselli at 11:20 PM No comments:

On Realism and Strunk and White: Rule 16 On Writing

I write about, in this post, the famous book the Elements of Style - one of the few editorial style books to make it to the bestseller list.
I live by this rule of writing:

Rule 16: "Prefer the specific to the general, the definite to the vague, the concrete to the abstract" (pg. 21).

Sad to say that I never once owned a copy of Strunk and White, the famed Elements of Style that completes the shelf of any writer (worth his salt).

Most of my adult life I lived amidst the company of other people's books. Now that I am free from the prescriptions of communal living I find myself purchasing books that I never in the past had to own. Strunk and White is one such book.

Click the link to read the rest of this post!!
Posted by Greig Roselli at 10:03 PM No comments: 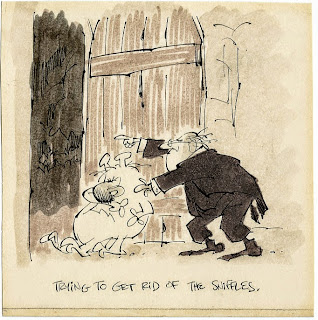 image credit: "Trying to get rid of the sniffles" by Paul Coker, Jr.