Subject: Hello, March! March is for Mars! And It's Springtime in TeacherLandia (And I Have a Freebie for You)

In this post, I talk about how I have been crazy obsessed with making mythology-related content for the middle and high school classroom.

March is For Mars, Right?

It's March. And what that means for me is that I get to ask my students, "What god from mythology is the month of March named for?" And, you know what? Don't feel bad if you can't immediately come up with the correct answer. It's one of those questions that is obvious once you know the answer. *Spoiler Alert*

The Greek god Mars (Or Ares in Latin). And I have a lesson for you. I have a freebie that helps students build vocabulary through Greek and Roman mythology. Myth is to Language what Recipes are to Food! You cannot have one without the other.

FREEBIE!: All About Mythology for the Middle and High School Set

I guess I am obsessed with myth. It's probably because mythology is just really cool, and I am determined to not make learning about myths just a Percy Jackson thing. Myths are actually exquisite artifacts to teach in High School (even though they get relegated to elementary and early middle school curricula). I just made a ton of myth-related resources in my Teachers Pay Teachers store. And to celebrate March and Spring (and the god Mars), I made my dazzling lesson on Prometheus totally free. So you can see a sneak peek of what I am doing in the realm of educational digital resources for middle and high school students. Some of the best things I have made related to mythology are designed for the late middle and high school classrooms. And I think that's really cool. And oh, if you are more of an Amazon person, I have a store there too!

Prometheus Bound for the Classroom 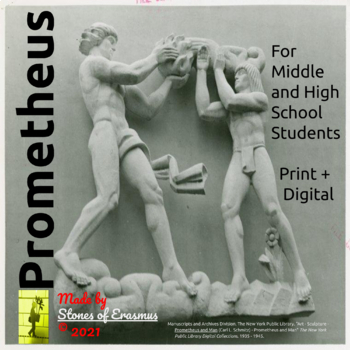 It's based on the story of Prometheus, the Titan who befriended Zeus. His name means “forethought,” which is kinda funny only when you realize his brother Epimetheus's name means “afterthought.” This gets even funnier when you realize that according to the myth, Prometheus had the forethought to warn his brother, "OK! Zeus is going to gift you with a beautiful woman named Pandora! Don't accept!" But since he was an afterthought — when the time came — Zeus said, "OK. Here is a gift for you, Epimetheus." And the rest is history!

And Why New Orleans is a Decent Inspiration for Mythology

I am originally from New Orleans. It’s where I got my first jolt of mythology because during Mardi Gras season — all the Krewes are made up of references to Greek mythology. You have the Krewe of Orpheus and the Mystic Krewe of Momus and Comus and Rex (Latin, not Greek, I know). And having read lots of William Faulkner, you know life in the south can mirror a Greek tragedy (or comedy!).

How do I keep it woke? How do I make ancient Greek or Latin myths relevant to living in the Americas in 2021? Easy — lots and lots of text-to-text and text-to-world connections. Did you know that March is named after a god? It's because of Greek and Norse mythology that the days of the weeks are what they are? The more you know, right?

So keep a lookout for a new product I am creating based on New Orleans, Mardi Gras, and Mythology!

Thanks for reading my blog. It's been a labor of love for over ten years. Can you believe it! XOXOXOXO

Greig Roselli (from Stones of Erasmus)

PDF Copy for Printing
Posted by Greig Roselli at 8:00 PM