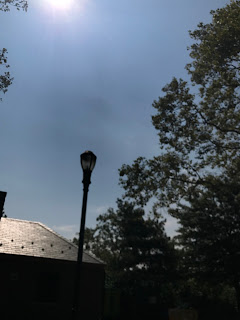 
- from Dream Variations, Langston Hughes
Personal Story
I like to collect quotes from poetry, from various sources, and whatnot. I have always liked this passage from Langston Hughes's poem "Dream Variations." Why do I like it? I like it because it is a relevant example of a poet exhorting darkness - extolling the color of blackness - rather than relegating "black" to a tired, and debilitating symbol of evil. So. That is why I like the poem. Hughes is resurrecting "black" as a symbol of beauty, not as a symbol of moral darkness.

Going Further
The poem imagines a speaker coming upon nature at the moment the sun is going down. Looking at the landscape, there is a moment when day turns to night, and the beauty of the oncoming dark sky fills the viewer with a sense of the sublime, of beauty.

Making Connections
Interestingly, the last line from this passage, "Black like me" is used as the title of a book, by John Howard Griffiths - about a white man who changes the color of his skin to experience what it feels like to be black in the rural South during the Civil Rights era of the 1960s. The book is strange because I do not think this kind of experiment would carry over well in today's political terms.

Epilogue
Do you have any poems that you've read that turn the tables on symbolism and imagery? I'd love to hear your examples - you can leave a comment in the box below.
Works Cited 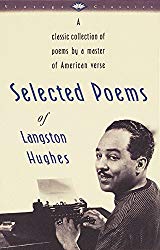 "Who AM I?" And Do We Ever Change (Also A Brief Reflection On "Is Being Together Possible?")

I spent last Saturday reading my journal from 1997. Look at what I wrote on March 31, 1997. It’s proof that I have not changed. At all. I will be sixty and still wondering about my place in the cosmos (and hopefully with a better HMO):


How do I fit in the grand scheme of the cosmos? I am seventeen, medium height, medium weight, hazel eyes, brown hair, mild complexion, have acne, am Catholic, attend a public high school, love to read and participate in other cultural activities, learn about historical events, visit art museums and view fine films. That’s me in a nutshell (into clichés tonight). I am an independent person and don’t care for much intervention. I get the most joy out of completing tasks by myself, not because I like doing it by myself. I don’t get my joy for performing and doing things for others, when I act I please myself. It is fun to see people laugh at my jokes or comment or something. I do, but frankly I don’t do it for them. People who know me well may think I am cold-hearted, I don’t think so. I love people and love seeing people happy. I desire the best for anyone I know; I am talking about the core of my being, what gives me most enjoyment: people or myself? The answer must be myself. I’d rather ride my bike alone or walk my dog alone. I’d rather cook a meal or read a book alone. I’d rather tour a museum alone or view the stars by myself. But I do love sharing my experiences. I am not shy when it comes to depositing my knowledge. The gift of teaching resides in me. That is what God gave me. I never grow tired of friendships and good conversation. I would get lonesome being by myself too long. I would want to escape and experience something else …. I have more to offer the world than wash dishes, get braces, being obedient, etc. I am impatient, but am hanging on the vine.

I am not sure I agree with my seventeen-year-old self that teaching is depositing knowledge but I will forgive him because he had not read yet Paulo Freire’s Pedagogy of the Oppressed. I no longer have acne and I am not sure where I stand on Catholicism but the gist of what I wrote that night in March of 1997 still rings true in 2013. Is this the same for everyone? Even if you don’t have access to a journal entry you wrote 16 years ago it is still interesting to reflect on how much we change. It's interesting I wrote that entry during my Senior year of high school. So it makes sense I would be thinking about what I want out of life. Now after having finished college and two graduate degree programs, as well as some years of teaching - and don't forget my six years as a Benedictine monk - I still think of what this seventeen-year-old boy was thinking: who the hell am I?
I think I am thinking about this more than ever because I feel this persistent push to be something, to do something, but at the same time I have this other feeling inside of me that I am (and have been) doing it all along - I just hadn’t noticed. It’s like I spend so much time thinking about what I will be or will do that I have forgotten what I did, what I have seen and heard. My seventeen-year-old self is telling my thirty-three-year-old self “to please myself” and continue to take pleasure out of art, novels, friends and all that jazz.
It sounds like what I am saying is that if I am ever going to find someone else to share my life with they also have to know their joy. We come together and share what joys we know. When I first read this entry I thought, shit, I will be alone for the rest of my life. But I read it again and it struck me, something I did not notice the first time I read this scrap of paper from the past. It’s so human to want to please yourself and to think of the future but at the same, I sense a longing to share that something with someone else and to know their joy. Is that what they call interdependence? It's when I say “I love sharing my experiences.” That’s the art of being together. That’s what I crave and I think it is what a lot of human beings crave. I love how at the end I say I am impatient and holding on the vine. That’s very Greig Roselli.

PDF copy for printing
Posted by Greig Roselli at 4:51 PM No comments:

Essay: How to be Generative Without Having Kids

Learn how my Uncle gave me his set of matchbox cars to me when I was young and how this influenced my understanding of passing something down from one generation to the next.
When I was a boy my uncle gave me his complete set of diecast matchbox cars.
There is a photograph of me as a toddler hanging on to our family coffee table, grinning in the flashlight of the camera’s aim, illuminated – darkening the background where you can see strewn on the carpet a multitudinous display of diecast cars. Not only did my uncle give me his entire set of matchbox cars but he and my aunt would take me on Saturdays to the flea market to scout out hidden diecast cars buried underneath piles and piles of junk. I was especially in love with the Matchbox brand, which started out in England as the Lesney company in the 1940s as a cheap way to sell toys to children during the war. I had Hot Wheels too. And I liked Corgi's models. But, my heart, in the end, was stuck on Matchbox.
Visiting the flea market was a big deal. My aunt sold fashion for porcelain dolls. When she and my uncle frequented the flea market stalls, they were looking for deals on doll fashions. My aunt instructed me on the first day I tagged along to help them pick out fabrics. "Don't touch anything," she told me. She put her arms behind her back and turned around to show me, saying, "this is how you walk. Hold on to your arm so you can catch it if it tries to grab something on the shelf." She was right. The flea market stalls were filled with items that screamed "tangible!" The musty smelling curtains and chain-smoking clerks, ogling collectors handling precious prints of Andy Warhol Marilyn Monroe's and 1950s Hugh Hefner Playboys were for me, a boy's wonderland. I obeyed my aunt, though, and tried not to touch. Besides, I had no interest in handling thin veined china or opaque Depression-era glass. I wanted the toys. While my aunt and uncle felt and measured lacy fabrics, I would look for cigar boxes and glass cases filled with diecast cars, hoping to find the prized Matchbox models that would add to my collection.

Click the link to read the rest of this post!!
Posted by Greig Roselli at 1:19 PM No comments: