Prognostication: A Hurricane and the Flu 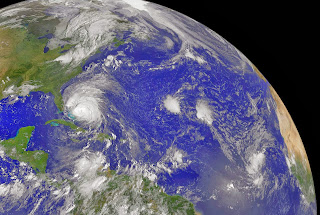 Still haunted by Mark Fishetti's article, "Drowning New Orleans" published in October 2001 in Scientific American. Someone had placed a photocopy of the article, replete with graphic maps of drench and ruin, on our work bulletin board the day before Katrina in August of 2005.


Computer models by researchers at Louisiana State university predict that the counter-clockwise winds of a slow moving, Category 4 hurricane (characterized by winds of up to 155 miles per hour with storm surges) crossing the Gulf of Mexico from the southwest would drive a sea surge 30 miles inland, right to New Orlean’s back door. Surging water would also fill Lake Pontchartrain, which would then overflow its western bank and pour into the city. At the height of the flood, the downtown would be under more than 20 feet of water only about 33 hours after the first storm winds touched the southern barrier islands.

Then in 2005, "Preparing for the Worst" was penned by the editors of Scientific American. Using predictions of devastation on the Gulf Coast, the editors warn that the flu virus could reach pandemic proportions if vaccines are not amply supplied by pharmaceutical companies - the death toll could rise ten times more than Hurricane Katrina.

Flu season comes every year as reliably as hurricane season, if we shore up our defenses against both, we will be in a much stronger position when the "big ones" hit.

I am not a doomsday sayer, but it seems to me, that scientists notice disasters long before politicians are willing to act. Maybe we should listen to the hard science prognosticators - we will listen to the dead ringing predictions an ancient Mayan calendar, but find death ears on hard, empirical facts. Surprising. America has left the Enlightenment a long time ago.

Now, granted, both predictions above were worse than the actual chain of events - but still, the worst-case scenario was presented - and the real scenario was not that far from what transpired. New Orleans is still vulnerable to flood waters; The flu did strike a terrible scourge this past September. I am sure 2012 is just a metaphor for incompetency more than Nostradamus's prophecy. Come on, let's give more credibility to science and let them help us a little, huh?

A Poem Written During Hurricane Season: "on the vacation of spirits"

I wrote a poem about Hurricane Katrina - because I lived through it. Here is the poem (and yes, I took the photograph too). 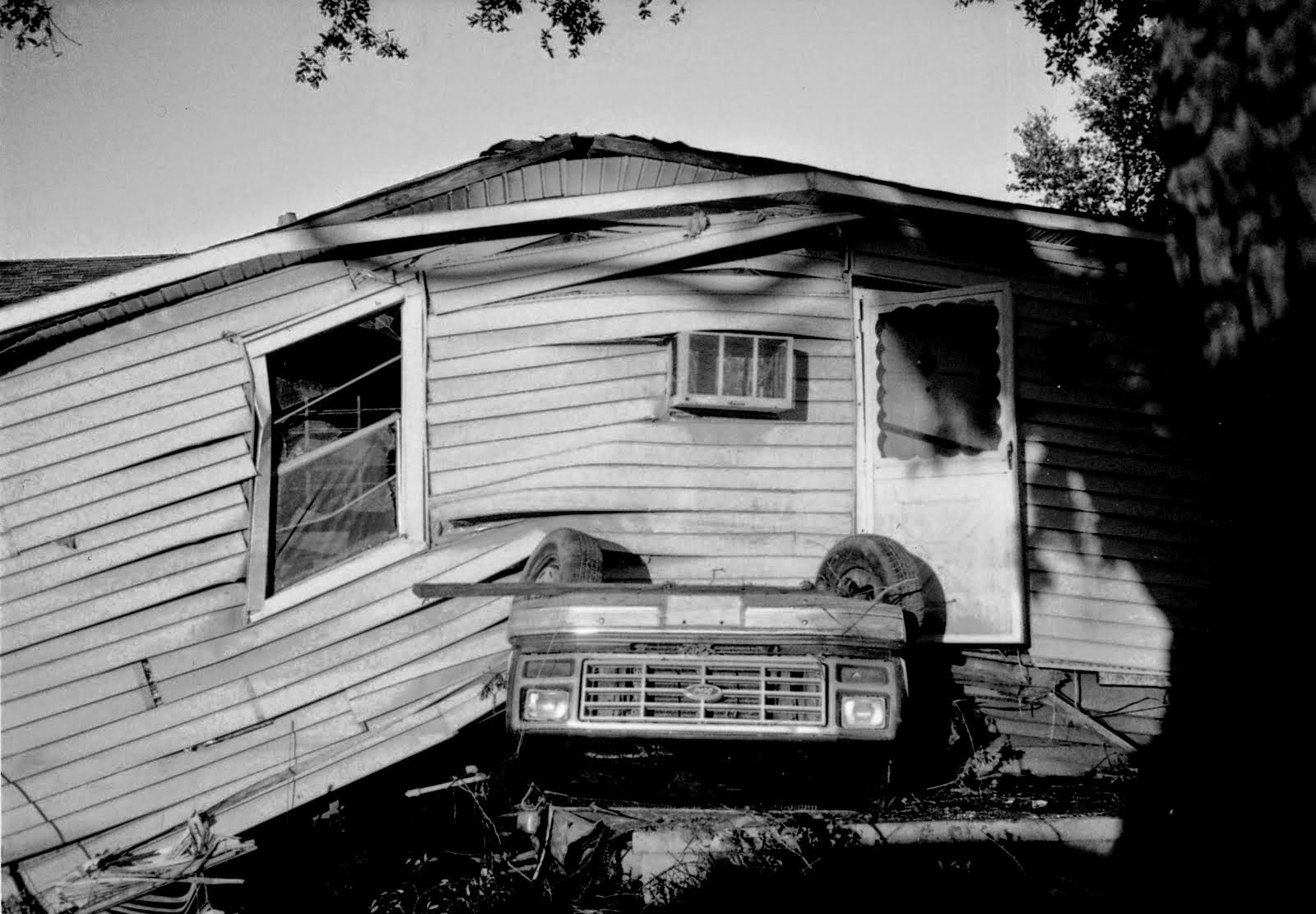 on the vacation of spirits

when the zephyr blazed through MR GO, the gods, naiads, goddesses, with their hollow shrieks vacated the levee womb, a deposit bereft of running life
left, vacant and empty where once
spirits danced and melancholy wept –
on the corner of St. Claude and Alvar –
now split into dry wood, a gaping gash,
unsutured and sullied with faded peeled shrimp –
drained,
as if blood itself where all that is necessary for a full spectrum rainbow –
now only empty houses, prom dresses

milton’s house,
left on top of a pickup
because there are no longer laughing gods to re evacuate,
no longer a god to sit on the stoop at the fish market,
a boy to close the door behind him when he leaves

Hurricane Katrina: My Personal Story on Living Through the Storm

PDF Copy for Printing
Posted by Greig Roselli at 11:32 PM No comments:

“Les enfants, les enfants,” whispered Georgette Pintado, when Br. Bede Roselli and his mother Pam found her at Covington High School’s cafeteria, curled in the fetal position on a thin mattress on the floor. “All she could tell me was ‘I’m worried about the poor children,’” Br. Bede said. “We called her Nanan. Anybody she took care of was called Nana’s kids. She even had a personalized license plate on her old Cadillac: NANAN. She took care of my brother and me when we were kids and was one of the first people I confided in that I wanted to be a priest.”
Georgette, along with dozens of other patients from Pontchartrain Health Care Center in Mandeville, had been temporarily relocated to the school turned shelter. Br. Bede, a monk at Saint Joseph Abbey, didn’t know she was at the school but stumbled on her while distributing Bibles with his mother, a certified surgical assistant from Madisonville, who had been volunteering her service at the shelter in the days following Katrina. “We didn’t know she was at the high school so you can believe how shocked we were when we found out she was there,” said Br. Bede.
Georgette Pintado was born in France in 1924 and grew up during the time of the Nazi Occupation. As a young woman she had been harassed by SS soldiers at a train station for not having her papers on her; she couldn’t understand them so the German soldiers slapped her and threatened to rape her. Fortunately, she was able to get away unharmed but vowed to emigrate from France after the war. Leaving her family behind, she sailed to New York after the liberation, moved to New Orleans, had a son named George, married Nicholas Pintado, a Coast Guardsman, and moved to Mandeville where she lived over forty years. “When they met, her husband knew how to say, “oui,” and she knew “yes,” which was all the language they needed to fall in love,” said Br. Bede.
Especially after her husband’s death of a heart attack, Georgette dedicated her life to caring for children at her home in Mandeville. In her two-story blue house in Old Golden Shores, she fed, cleaned and bathed scores of children through the years. “She wasn’t just a baby sitter, she was a real nanny,” said Jackie Lark, whose two children, Brian and Jeffrey, were cared for by Georgette from birth until they were old enough to be home alone. “She did everything for our kids, even baked cakes for them on their birthdays,” she said.
For twenty-five years, every Wednesday she visited the sick at Pontchartrain Health Care Center as a Eucharistic minister. She was so committed to this weekly service, that if a parent kept their child late at her house on Wednesday they knew to pick them up at the nursing home. It wasn’t unusual for Georgette to arrive at the nursing home with five or six children in tow, assigning them special tasks for the patients. She not only distributed communion to the patients but spent ample time with each person, talking to them and giving out candy or cigarettes as needed. This was the same nursing home where she would move into after her quadruple bypass surgery in 2003. Her condition worsened after her son, George died of a heart attack in 2004. The impact of Katrina worsened her condition even further, along with the stress of relocating, her debilitating arthritis, and poor vascular circulation became too much for her body.
Georgette was moved back to Pontchartrain Health Care Center three weeks after the storm. Father John F. Talamo, a Salesian priest at Our Lady of the Lake Catholic Church gave her the anointing of the sick before she went into a coma and a few days later she died on October 4, 2005. Father John declared her a “living saint” at her funeral mass and commended her for her unfailing service to the church. He mentioned that in her final days she still remembered the “Hail Mary” and the “Our Father” even though she was quickly losing consciousness.
Georgette’s daughter-in-law Marci Tittle of Hickory Creek, TX and her granddaughter, Megan of Seattle, Washington, arranged the funeral and the gathering afterward at the home of Jean Champagne of Mandeville. Many of the children she cared for, the “les enfants” she spoke about before she died, gathered together there and shared stories about their Nanan. Nanan’s kids. Simone. Katherine. Sarah. Brian. Greg. Jean. John. Jeffery. Margaret. “It felt good to share what we remembered about Nanan and to know it was her who brought us all together,” said one of the children at the gathering. Nanan was the glue for these children’s lives — an influence that cannot be easily forgotten, no matter what may befall us.