FYI: New Orleans’s number one export other than oil is tourism. Except maybe for mid-August when even the locals complain it’s too dang hot - the city is abuzz with activity. My list just touches the tip of the NOLA iceberg. I do not even mention the numerous festivals and events that converge on the city each calendar year — Jazz Fest in May, Mardi Gras in February or March, and Southern Decadence for Labor Day — just to name a couple of popular events that pop into my head.
Additionally, my list does not go beyond the traditional - so I don't mention trending spots or places that I have never visited. I lived in New Orleans as an adult for several years, and growing up I lived in the suburbs west and north of Lake Pontchartrain (in Saint John the Baptist and Saint Tammany Parishes, respectively). So I hope you enjoy the list and maybe you have your own contributions - which you should add in the comment section below.
Here's my unofficial list of things to do in New Orleans for first-time visitors:
#1. Jazz! Preservation Hall on Saint Peters Street in the French Quarter     Take in a jazz performance at Preservation Hall on Saint Peters Street in the French Quarter. It's a great way to experience our musical heritage in New Orleans. The venue is dedicated to the preservation and performance of jazz. Each hour-long performance is like a love song to jazz and a shout-out to the city's living and working jazz performers. The musicians talk with the crowd and create a fun, intimate experience. Be sure to get a photograph with the performers after the show, and leave a nice tip!
I highly recommend that you buy tickets in advance online. The venue is small and space is limited (and it is a very popular spot). Without advance tickets, a queue forms on Saint Peters Street for people hoping to snag a ticket at the last minute. Be prepared to line up well in advance of the performance time (there are five or six performances on a given day). If the line has extended beyond Pat O'Brien's then your chance of snagging a ticket dwindles.
Other Music Venues I Recommend: 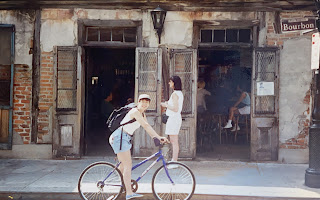 Bourbon Streetview (with Jean Lafitte's Bar in the background)
Bourbon Street is the nighttime pulse of the French Quarter. Any night on the calendar it's most likely to be chock full o' tourists — and on Mardi Gras Day or during the Southern Decadence Festival it's veritable melée. However, Walking from Bourbon to the end of the French Quarter is a nice thirty-minute walk, and it affords one a realistic glimpse into life for people who actually call the French Quarter home! Once you pass the gay bars on St. Anne Street, the neighborhood evolves into a quieter bailiwick of handsome row houses and local bars. Once you hit Elysian Fields you can venture into the Faubourg Marigny.
#9. Eat Dinner at a Very Traditional New Orleans Restaurant:
- Napoleon House (500 Chartres Street). Order the Red Beans and Rice.
- Café Maspero (601 Decatur Street). They serve seafood. N.B. Crayfish is not in season in August.
- Daisy Dukes (121 Chartres Street) - Southern-style place.
- Luke (333 St. Charles Avenue) - French and German food
- Palace Café (605 Canal Street) - American food.

If you want to venture out of the New Orleans metro area, these places could satisfy your palate if you are willing to drive for more than one hour:
- La Provence (25020 Highway 190 in Lacombe, LA) - French dining
- Sal and Judy's (27491 Highway 190 in Lacombe, LA) - Crazy good food. Comfort food.
- Trey Yuen (600 N Causeway Blvd, Mandeville, LA) - Cajun-style Chinese food
#10. Gamble at Harrah’s Casino:
Harrah's is the only land-based casino in the State of Louisiana. It's glitzy and there is an OK all-you-can-eat buffet. Budget your money. Choose an amount you are willing to lose and don't go over your limit. I'm basic so I play the penny slots and then I validate my parking (it's expensive to park in downtown New Orleans so the parking validation is a welcome win).
PDF Copy for Printing
Posted by Greig Roselli at 10:30 AM