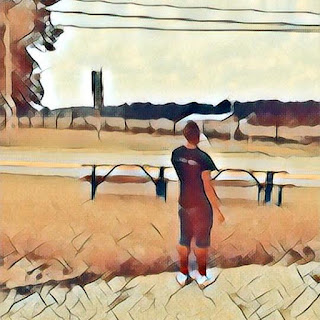 A YOUNG BOY DECIDED TO ENTER A FIELD.
Stone monoliths soared into the sky with shards of rusty metal and broken glass beneath.  The enigmatic structures beckoned the lad; the eight slabs of concrete called to him.  Stains of derision from his family clung.  He climbed the fence (which had a clearly visible sign stenciled in red: “NO TRESPASSING!”) to escape for a while. He penetrated quickly to elude the threatening noise of the close traffic. With quick steps, he had already entered the depths, but he wasn’t afraid. Rusted metal, a browned apple core, and aluminum scraps riddled the bare, gaseous earth. Thorn laden brambles engulfed the concrete slabs. A can of Moxie lay entrapped in one of its clutches. Concealed in the twisting vine one could find secrets and lost memories. All of a sudden it seemed an adventure to explore this vast void, to maybe find a truth. A way to prove to himself there was more to life than bitterness and homework. The collected, curly-headed youth looked upward: tall monuments to fallen bridges that once traversed mighty waters stood before him. Huge pieces of masonry, stacked one on top of another, looked enticingly climbable. He scaled it with much agility, using the large rusty appendages as an aid. A bead of sweat etched its way across the boy’s face: the first sign of effort, true gusto, true vigor.
Like a daring Tibetan climber, he reached the top and scanned what was visible. Tall trees marred his vision in all directions. It was just him on this carved slab, sitting crossed-legged and thinking. He pondered out loud, “Do life’s accomplishments mean anything or are they a barren heap that stretches for miles and miles?” He shook his head. “No, they mean something,” he reminded to himself. He had the answer in the palm of his hand; he just couldn’t express it. He needed to just sit on the slab and ponder, simple thoughts at first, then more complex. A continual succession of ideas fluxed into his mind.

A bird circled overhead as the boy pondered; the bird noticed the lad. It noticed his proud face, a face full of accomplishment. The white bird spread its wings and soared, keeping its eyes on the lad. The boy got up and searched his surroundings. There was not a whisper of life sans the bird. A feeling of primitive urge came over the boy. He issued a war cry like that of a warrior marking his territory. Not one person, but the bird, called back with its melodious caw. To further prove his primal instincts, he unzipped his pants and urinated. He did it without a thought. He was smiling. He was smiling because he released a side of himself that never came out. After wallowing in his mark (not literally) he climbed down the structure. It felt oddly good to be back on solid ground, even with the debris protruding out to nab him.

Dragonflies zoomed past his head, finding their long-lost loves. Crickets and katydids started to make their romantic calls. Even with night on the horizon, the boy wiped the sweat beads from his forehead. He still plowed forward; it didn’t matter to him where he was going, as long as he reached some destination. The industrial forest was still spread before him like a mismatched quilt. He didn’t know where its final destination would lead to and he really didn’t care. He liked the chaotic state he was in — chaotic but harmonious.

He felt calm amongst such dilapidation. He enjoyed the vision of the rusted pipes and the eroding concrete. Among the decrepitude, he forgave his mom and dad. They were probably worried about him. He never really wanted to disappoint them; his anger just overrode his love. It was getting dark and he started to walk back, hoping he could meander through the debris back to the fence.

It was a sharp cry at first, then it became a soft whimper. The noise was coming from the pipe just above his head. When he was just below the pipe he heard the noise again. He jumped up to grab the edge. The pipe was large and ate him up quickly. It was dark and he was afraid. The fear disappeared and he saw the source of his search: a timid kitten walked toward him. He scooped the creature up quickly. The smell of decay (possibly of other animals who didn’t make it) impregnated the boy’s senses and he squirmed out backward. “How did you get in here?” the boy said as he scooped it up beneath his arms. It looked healthy when daylight hit; the kitten rubbed its little head against the boy’s chest and clung to him. He drew it close to his breast and facing the gaping pipe jumped down to the earth. He walked back towards the fence, which bordered the wasteland. His guardian angel must have guided him. Darkness was complete and he was afraid of what his parents would do.

Sure, it was a simple walk. Every so often those simple walks change us. Those simple meetings with yourself allow you to know your inner workings.

His parents were glad to see him safe. The lad ate his supper and went to his warm bed. He kept his kitten hidden. They could find out later. Ever since that day, the boy looked at things differently. People were 3-D in their personalities. Maybe that trek through the field allowed him to find the secret that was incognito. You begin to notice those particle details about yourself. Once the world is complicated, but now it is extremely lucid. He noticed his father’s rough beard for the first time and admired it.
PDF Copy for Printing
@ 1996 Greig Roselli; image credit: Greig Roselli