In this post, I talk about how Martin Luther King, Jr. is known as a civil rights activist. Still, his legacy is more about human rights -- especially the state of poverty that he believed could be eradicated if humans only have the will to do so.

Today I listened to a brief speech given by Martin Luther King, Jr.'s son, Martin Luther King, III. In the video, he talks about his father's legacy but points out that one message King repeatedly gave was often not emphasized in the praise we often give the slain civil rights leader. It's about poverty. When King was assassinated in Memphis on April 4, 1968, he protested against the poverty wages sanitation workers were given who worked in the city. Workers worked long hours and subsisted on low wages, and many were also on welfare. King espouses the merits of having a stable job and receiving an equitable income as something elusive for Americans. Whenever I talk about living wages today or about the need to reduce poverty, I often run up against tin ears. It's easy to shush away poverty as one of those problems Miss America pageant contestants say they want to defeat (along with world peace). But King was right when he said the problem won't go away unless we have the will to fight it. When I look at the problems beset by the Covid-19 virus, I see a public health crisis, but I also see a crisis that has torn open the inequalities caused by poverty. In the United States, forty-five million (maybe more) live in poverty, which by some estimates is more than were poor during Martin Luther King's time.

So, if you are celebrating the Martin Luther King holiday today in the United States, it is appropriate to sing praise for what he did to secure civil rights, but the road to equitable human rights is still not won.

Posted by Greig Roselli at 8:33 AM No comments:

New Orleans has an all-men homeless shelter on Camp Street. Today my cousin and I stepped inside to take a look. 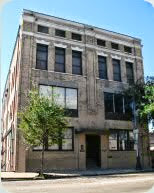 photo credit: Ozanam Inn
Spontaneously, while walking on Camp street heading for the D-day museum, We crept behind a gate. Ozanam Inn sprung into view as if metastasized right there on Camp street, replete with a line of men, waiting in line for a room to sleep. But he didn't know what was behind the gate. I didn't tell him; he was horrified, ripped from a pleasant view into a darker corner, social inequality thrust upon a privileged. It was rudeness on my part; I had said, "Come here. I want to show you something," as if I knew what a good lesson was. To me, they were readers, workers, sinners, saints -- reading a newspaper, one, another a novel, and another dragging on a cigarette. Another protecting his bicycle leaning against the dump. For him, just a boy at my side, they were strangers, monsters in his sleep, the stay-away-from-them folks momma told you about, not the needy in want of bread, shelter -- not the Samaritan on the block. It was my fault; I deserved his "Don't ever do that to me again without telling me first" accusation. In my rush to enlighten, I revealed reality too quickly, shed the gauze from his eyes too swiftly as if I went to amputate his legs without warning. We walked to the museum and I could tell I had frightened him. He was skittish and uncomfortable, gazing into the plexiglass displays of bombers and beach ballasts, authentic uniforms; and my words, a mismatch of history and mentorship. An old veteran's wife approached us while I was trying to explain axis and allies; "Listen to him boy; you can't get a better lesson than this". You indeed can't get a better lesson that.
PDF Copy for Printing
Posted by Greig Roselli at 9:35 PM No comments: