Quotation: A Proverb on Taking a Hint (And How One Word is Enough)

In this quote post, I lay into a pithy proverb coined by a Roman dramatist about taking a hint (and when to take it).
”A word to the wise is sufficient.”
— Attributed to Terence, Roman Playwright (born in Carthage, North Africa c. 195 B.C.E, and died c. 159 B.C.E.)

I had scribbled this quote in my journal. I keep all of the journals I've written since I was eleven or twelve years old. I've slowly been digitizing them, which is why I came across this quote I had written down when I was a sophomore in high school. Taking an English class with a highly creative teacher, I learned to keep quotes that I liked so later I could think about them and write about them. As a teacher, I often have students think about quotes, and I encourage them to collect their favorites. Gone are the days of marble composition books — but kids today use Quizlet or Anki to collect what they like and find online. Or, quotes are made into memes (I have a Pinterest page devoted to quotes-turned-into-memes). But I never wrote about "a word to the wise" until now. 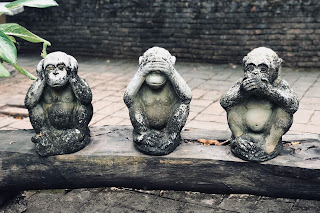 Photo by Joao Tzanno on Unsplash

If you were to classify the quote, it's technically a proverb. In Latin, it's "Verbum sapienti sat[is] est." While it's attributed to Terence, the saying has taken on a life of its own. It's often written only as "a word to the wise" or "a word to the wise is enough." But what does it mean? When I first read the proverb, I misinterpreted it. I thought it meant, wise people (i.e., smart people) don't need you to talk to them too much. Just say a simple word to them, and that's enough. As if really smart people are incredibly tight-lipped. But that's not what the proverb is meant to convey. A word to the wise is more about the wise person. A sage doesn't need a lot of information to sum up what's going on in any given complicated situation. If you turn to a wise person, all they need is a hint of what you're going through, and they can infer a solution.
Wise Teachers Need Just a Word And That's Enough
Teachers need this skill. In a school setting, millions of things are going on at once, and kids tend to expect their teachers to guide them — right? A wise teacher can infer correctly what's going on. I guess a modern version of "word to the wise" is the ability to "read the room." All it takes is a whiff of something, a word, an action, and a wise teacher can sum up a situation and intuitively enact a plan.
In some ways, I am good at taking a hint and understanding the bigger picture. A lot is often unsaid. When people say "read between the lines," what they mean is pick up on the clues of what's not being said. Having exceptional emotional intelligence is a prerequisite for the wise person. Don't go to extremes in one's thinking. Trust one's gut. Act with purpose. Don't second guess. Avoid excessive speculation. Another quote comes to mind — the most simple answer is most likely the best one. That's from William of Occam, a fourteenth-century monk, and philosopher —
"The simplest explanation is probably the best. Don't complicate matters if you don't have to"
And Occam is right. A reasonable explanation is often the correct answer rather than a many-stepped answer. Listen to people try to argue that NASA didn't send humans to the moon. It takes more steps to say that the moon landing was a setup than to simply accept the most reasonable (albeit spectacular) answer that we sent men to the moon.
Some Folks Need More Than Just a Word (And That's the Problem)
Thinking of the converse of "word to the wise" is helpful. Have you ever tried to explain a situation to someone, but the person just couldn't seem "to get it"? At a dinner party, I had a friend tell another friend's wife, "Oh. Your mother is so pretty tonight." Even though I tried to save my friend from her faux pas she didn't get the hint. She ran right into the situation completely unaware that she didn't size up the situation properly. Some people are incredibly literal — they need everything spelled out for them. Usually, they are more rule-based individuals. Intuitive people can come up with solutions faster because they skip a few steps. And they accept when they are wrong. And they know when to avoid rules and when to follow them.
A Word to the Wise! Hear ye!
Have you noticed examples of "a word to the wise" in your own life? Maybe you know someone who exemplifies the proverb. Or you have a co-worker or a boss who is exceptional at picking up on clues to solve a problem. Either way — let me know your stories. Leave a comment.
Sources: The Oxford Dictionary of Proverbs. United Kingdom, Oxford University Press, 2015. / Ammer, Christine. The Dictionary of Clichés: A Word Lover's Guide to 4,000 Overused Phrases and Almost-Pleasing Platitudes. United States, Skyhorse Publishing, 2013.
PDF Copy for Printing
Posted by Greig Roselli at 11:00 AM No comments: