“I have always imagined that Paradise will be a kind of library.”  -- Jorge Luis Borges

I had asked my sixth graders, whom I meet faithfully every Saturday to work on writing and reading comprehension, to write an essay about a favorite thing, a wished-for happening, and one place they would like to visit. My hopes? That they would tie the pieces together and craft a five-paragraph essay. 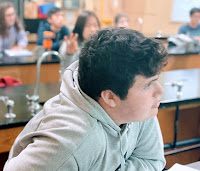 Here's what I wrote as my students composed:


My favorite thing is a book; my wished-for happening is to have any book I ever want or hope to read at my immediate disposal; and my favorite place is a library, of course. It is a miracle of free association that my "three" cohere. I didn't begin it this way. Nor intended it. So, since this is a timed piece of writing, I may as well trust the process.

First, books. Books comfort me. I won't even mention content, for now. The form is important only to the extent that it helps me reach the content. Even a book nestled in the 01000100s of my iPad comforts me. Since purchasing an iPad several months ago, I still find it a delight to load up the Google Books app and add classics from the seemingly endless supply of out-of-copyright books. Lest I deceive you into thinking I only love digital books, let me remind you that I used to have a sizable library which I had to give up when I moved to space-deprived New York City. What is it in a book that is so great? It's the option I have to dip into words, without which, I would be lost in an already feeling-kinda-lost world.

To end the misery of finding an out-of-print gem is a great wished-for happening. Have you ever stumbled upon a book you would like to read but your local library does not have a copy and Amazon's used marketplace lists it at a price more than you are willing to spend? If I had a superpower it would be to summon at my fingertips any text I want to peruse at any time. Imagine Google Books if it were a realized reality.

I agree somewhat with Borges who said paradise is like a library filled with an endless array of books. I should qualify this wish, however. I do not envision a Borgesian library of books filled with every possible letter combination. To me, this would be hell. To search through endless mismarked copies of Hamlet in the hopes of finding the ur-text is a maddening enterprise, which is why Borges has a few of his library travelers sprawled on the floor dead — dead of exhaustion? Dead after searching aimlessly for an ur-text. No. Sir. Not that my paradisaical happy place must have the "great books". It must be replete with Barbara Cartland as well as Homer's lost epics. I prefer a bad book, a good book — even a book like Finnegan's Wake — which is bad and good at the same time.

Certainly, the fantasy I have described here is long in coming. And to think that it could be foreshortened by a dystopian regime akin to Ray Bradbury's Fahrenheit 451 is a disastrous thought. I would like to think ideas and philosophy will be continued to be vouchsafed by man's pen -- whether it is n the guise of a keypad or a voice dictation service, doesn't matter. I shiver at the thought that ideas are written only to appease: this would be the Huxley imagined nightmare. The Orwellian nightmare is farcical -- for hasn't Big Brother been shown to be inept? If the Bradbury nightmare is the most plausible then I must add a fourth wish: to hope, beyond hope, that I can memorize, commit, vouchsafe, one book to memory. The problem is I am stuck in the choice. I wouldn't know which to choose; instead, Montag's firemen would find me like they found the madwoman who burned herself up with her cherished books. For me, though, they won't burn me up, instead, they will laugh.

PDF Copy for Printing
Subscribe to stones of erasmus by Email
Posted by Greig Roselli at 2:00 PM No comments: