In this post, I regale you with pictures and musing from an All Hallows' Eve visit to Greenwood Cemetery and Sunset Park, Brooklyn. It was a beautiful Autumn Day and we are all cognizant of the need to physical-distance ourselves — so what better way to do that than to be outdoors in a massive cemetery?

A front lawn on a sidestreet in Sunset Park
hosts a fortune-telling witch. 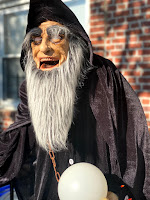 Exploring Greenwood Cemetery on All Hallows’ Eve, I scored a handful of great photographs. Located in South Brooklyn, the cemetery is one of the oldest graveyards in the city and is a site of a Revolutionary War battle. @historicgreenwood is also a National Historic Landmark. My friends John and Jennifer joined me; we also went to Sunset Park, my old neighborhood. Scarfed down a torta stuffed with spicy pork at @tacoselbronco, scored a free beer from a passerby, and watched the D train come out of the tunnel on Fourth Avenue — it was a serendipitous day. 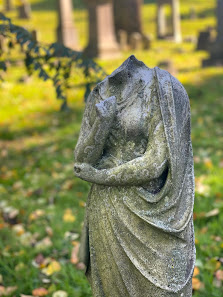 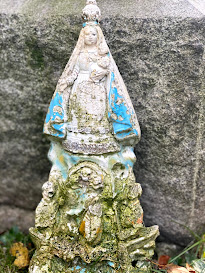 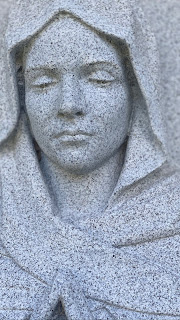 PDF Copy for Printing
Posted by Greig Roselli at 7:35 PM No comments:

Not too far from Alexander Hamilton's grave in Lower Manhattan, one can find detailed grave markers like this one. — How many symbols can you find on this tomb?

Posted by Greig Roselli at 1:49 PM No comments: 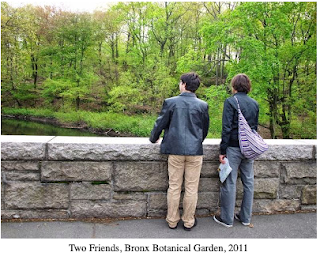 In this post, I recount a story of when I found a bottle with a message tucked inside of it.
Shaking Off a Feeling of Emptiness

Do you ever get this empty feeling you just can’t shake?  It’s like the person who pulls up to their house, sits in their car and lets the engine run when they get home from work, to breathe again, before easily letting go of the ignition, sighing as the car dies.  Not that the person hates his life.  He just needs to breathe.  Again.
This reminds me of Walker Percy, a writer who searched out answers to the odd questions of everyday life – like, “what do I do with myself?” He won the National Book Award for The Moviegoer in 1961, about Binx Bolling, a disconsolate everyman in New Orleans who ostensibly has a good life, a girlfriend, a steady well-paying job, but nevertheless feels this emptiness inside the pit of his gut that he just can’t shake. One day it occurs to Binx to embark on a “search,” to discover what is missing in his life.
As A Monk I Would Walk in the Woods
The summer of my first year in the monastery, I was twenty-two years old. I was on a search.  I escaped the monastic schedule to hike with a fellow monk who had joined the community at the same time as me. Our plan was to climb the fence along the cemetery to reach a tiny creek, full of white sand, like an ocean's front, that meanders to the Bogue Falaya River. I think we did this once or twice: took off our shoes and socks and donned a bathing suit, crinkling our toes gingerly over rough patches of pine needles and dried up Water Oak leaves until we reached the banks of the creek. A soda for each and a bag of trail mix from the house – one for each – drank 'em and nibbled on fleshy banana bits and salted cashews on the banks, on a Sunday afternoon, when the everydayness gets heavy. We knocked back a few dried apricots into your mouth; take a swig of Orangina, to reduce the despair of the early twenty-first century. The water was cool, even in the summer, and the sand was supple, sinking a few feet past our ankles, making it difficult to walk, careful to avoid the odd shard of glass or roping water snake that patrols the shallow waters. When the bag of trail mix emptied and the sodas had gurgled in our bellies, we hurried back to the monastery to attend evening prayer. To enter back into the rhythm of monastic life. On days like this, as a friend of mine told me once, you feel on par with existence.
Walker Percy's Empty Bottle
Coming out of the woods, I spotted an empty bottle next to Walker Percy’s grave. He is buried in our cemetery. Usually, there is a flowerpot on the edge of his grave: WALKER PERCY 1916 - 1990. So not to see the usual flowerpot, but an empty bottle struck me as peculiar. At first, I thought that it could have been leftover by rowdy teenagers from the neighborhood, but on closer inspection, I saw that it was an Early Times whiskey bottle, Percy’s favorite brand; an admirer had left behind a note stuffed inside. This intrigued me.
Why would someone come to a Benedictine monastery to leave behind “a message in a bottle”?  What search were they on?  Did they find themselves at a difficult time in life, seeking answers? Or was it an inside joke, a jocund sentiment left for a friend? Or a prayer left unanswered? Coming out of the river and finding someone else’s message situated me at a crossroads, a place of tension where the monk meets the world – a place where my disconsolation and anxiety struggled with a sense of place and meaning – for I was very much not at ease all the time, in my skin, in my monastic habit, in this place I called home – and the questioning of another seeker confirmed for me that we are both searchers on this planet, seeking and groping for answers.  For aren’t we all searchers? Aren’t we all castaways on an island? For Percy, “to be a castaway is to search for news from across the seas.”
The Self as a Castaway
I think this is the self in any generation: a castaway on an island, searching for news from across the seas, salt in his face and hair, thirsty and desirous. But at every juncture, we are not at ease in our skin, with our station in life. We do not know how to sift through the avalanche of information that bombards us, not knowing the difference between the Good News and the Daily News. Coming out of the woods is a messy business. We emerge as castaways, hoping to decipher a message in a bottle.
PDF Copy for Printing
Posted by Greig Roselli at 11:26 AM No comments:

A quick visit to the churchyard at Trinity Church on Broadway in Manhattan reveals a little bit of early American History.
Visit Alexander Hamilton's tomb here. And no, he was not a president. He was secretary of the treasury. He was killed in a duel by Aaron Burr on July 12, 1804.
Showing this photography to a friend, he called it a memento mori. The financial center of the world rises in the background while the foreground reminds us of death.

PDF Copy for Printing
Posted by Greig Roselli at 11:58 AM 1 comment: