Getting Off at Rouses Point, New York
Taking the Adirondack train line from Montréal on Amtrak, the first stop in the United States is a town called Rouses Point in New York state. Since it is a border crossing, Amtrak has scheduled the train to stop for at least an hour, so agents from the U.S. Immigration and Customs Enforcement (I.C.E.) can board the train to check every individual on board. For this journey, I happened to be seated in the front of the car. I looked out the window, and I could see two white vans pull up to the train station. Five or six uniformed agents dressed got out and boarded the train. I was the first person to be checked. I gave the agent, a middle-aged man with a scruffy beard, my passport. "Where are you going?" he asked. I told him I was getting off at Rouses Point, and this was my stop. "Why are you going to Rouses Point?" he asked incredulously. "For pleasure, mostly." "What kind of pleasure?" he asked, still incredulous.

I had expected a quick interview, the kind received at the airport customs desk when the agent asks if you are entering the country for work or pleasure. My answer did not mollify this agent, however. He asked me to point to my luggage, how long I was staying in Rouses Point, where I was staying, what I planned to do in the town, what I did for a job — and through it all, I was a bit nervous because I had never been asked so many questions at a border crossing. The questions were easy to answer. I gave him the address of my motel and told him I was taking a short vacation before school was to open up again in September.
I was anxious about finding my motel and getting settled in for the afternoon. I looked at the agent and told him if I could get off after he inspected me. He looked at me for a moment and then explained that agents had to check the entire train for any suspicious activity. "What if someone on board were carrying contraband," he told me. "Then everyone on the train would have to be checked to make sure there was no cross-involvement." It made me think that the necessary act of boarding the train made me somehow connected to all the passengers on board this train — just an hour or so ago, I had been in Montréal boarding this train, and it felt effortless. The train leaves the city, crosses the St. Lawrence River, and then it's farm and rural countryside. At Rouses Point, the landscape opens into the United States in a quite unceremonial way.
At that moment, I felt self-conscious because I thought everyone on the train was listening in on my conversation with the I.C.E. agent. He told me to go to the café car and ask his boss for clearance. If the head agent OK'd it, I could get off the train. I hurried through the Amtrak cars to the café car, which is usually occupied by travelers who want to eat a snack, look out at the scenery, or talk to the train crew who tend to sit in the cafe car to take notes and to prepare for the next stops on the route. Four agents were seated at the tables, looking serious, and doing their job. "Excuse me, sir. I have just been checked by an agent, and I would like to disembark here, at Rouses Point.
The conversation was simple — "Sure. The agent said. You can get off the train." I was so ecstatic. I rushed back to the agent who had interviewed me and said, "I can get off the train!" He looked at me like I had missed a step or did something wrong in the Byzantine procedure of being checked in at the border. "Are you sure you spoke to my supervisor?" Yes. I told the agent his supervisor's name and gathered my things. I was nervous, so in a moment of excitement, I exclaimed, "Have a nice day. Thank you for protecting our country!" I think I said it in such a heightened tone that it made everyone on the car chuckle. I got off that train in a hurry.
Visiting Rouses Point
The town of Rouse Point is a nondescript postage-stamp kind of a place, replete with a singular lake-style beauty. Lake Champlain is its main attraction — and while I was there in Summer, it was August, so few people were milling about. The town is very close to the French-speaking Canadian province of Quebec — so I imagined I was in a unique mashup of anglo-francophone heaven. Sitting in a café on the first day I arrived, I noticed a francophone couple seated next to me — and I marveled at how I often do not think of the United States as sharing a border with French-speaking folks. The Family Dollar, where I picked up some supplies, had a sign on the door that warned folks "No Canadian Dollars Accepted Here. Card Only. Or American Cash." I started to fantasize about teaching in a rural country schoolhouse in French-speaking Canada, close to the border, and I would spend my weekend hiking through the woods, going back and forth across the border. How my students would love me, and I would become immersed in French and truly make it my second language. Would I live on Lake Champlain? I felt like I was in a different yet familiar America. 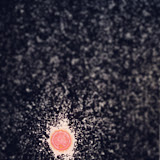 A Ratty Motel On Lake Champlain
So. I was staying at this ratty dump of a motel on Lake Champlain. I woke up in the middle of the night. A red light was emanating from the window — thus, I took my phone and captured a grainy photograph of the dot.
I stayed in Rouses Point for the weekend, then I planned to hop back on the train back to New York City. I thought, will I see the I.C.E. agent again? I walked to the station from the motel earlier than I needed to —  the Amtrak station is handsome. There is a museum inside dedicated to the area's train history — Rouses Point at one time in history was a bustling spot for train travel — especially freight — than it is now. It just so happened that as I was waiting for my train, a man arrived, spraying the station grounds with what looked like weed killer. He saw me waiting — I was the only person at the station. I asked him if the train museum was open. He said, "No. But if you give me a couple of minutes, I will open it for you." And sure enough, he did. He showed me the museum, and I learned that the station had been in somewhat disrepair for years. Still, when President Obama had opened up Federal dollars to bolster the country's transit infrastructure, the Rouses Point station was given money to renovate their station. The town had been in an economic slump ever since the Pfizer pharmaceutical plant had closed down, and 1,200 people lost their jobs. Also — the guy with the weed killer turned out to be not only a local but was at one time the mayor of Rouses Point. He told me about his several train trips to New York City — on routes that I had never heard of — and he ended the conversation with an announcement that he had to get back home and cook for his wife. "It's my turn today — I am making gyros."
Going Home — Waiting Again at the Train Station
Finally — the train arrived — and the I.C.E. agents boarded the train. I had been joined at the platform by this very loquacious guy who was waiting for a friend whom he hadn't seen in a decade or more. No one could board or get off until they did their job. The I.C.E. agent did notice me, however, and he said to me, "You know why I asked you so many questions a couple of days ago?" No. I said. I did not know. "Well. I saw that you were staying at that ratty motel on Lake Champlain, and I wanted to tell you how much of a dump that place is." I laughed to be polite, but I resented his friendliness that seemed after-the-fact. He told me he lived in Rouses Point and apparently, his house was very close to the motel where I was staying.
PDF Copy for Printing
Posted by Greig Roselli at 12:00 AM No comments:

Travel Diary: Waiting for the Train in Hudson, New York

In this post, I post a video of my Mom and me waiting for the train — we saw the Adirondack pass through, and then, later, we hopped onto the Empire Service.
Waiting for a Train
Watching the New York-bound Adirondack Amtrak train load up passengers and disembark. It left us alone on the platform waiting for the Empire Service to Poughkeepsie.
Hudson, NY
Hudson boasts a small platform for Amtrack trains north of New York City. Because of its proximity to the city and to the shores of the Hudson station, the little station serves three Amtrak lines to Vermont, Montreal, Niagara Falls, and Toronto, respectively. The town itself is quaint, and it boasts a charming business district.

PDF Copy for Printing
Posted by Greig Roselli at 8:30 AM No comments: