Me and My Cat - Circa 1980s Roselli Family Photo

I like the photograph above for two reasons.
First, Tobey looks glorious and we are definitely bonding - although my toothy grin is a bit unsettling (probably because the image is cropped and half my face is missing).
Second, the sofa we're lounging on sticks in my memory - I loved its satin-like feel - a bit of luxury that I can recall from my Southern Louisiana upbringing in the mid-1980s.

Smokey was our family's first cat pet. She had babies - and it was my first introduction to mammalian live birth (no epidural). Smokey had her babies in a cardboard box layered with a soft blue blanket. I remember we all - my brothers and mother - witnessed it. I was grossed out by the part when Smokey licked the placenta off her cat babies (I was eight - so anything wet and slimy was disgusting).

We kept one of the cats from Smokey's litter and named him Tobey. We gave the rest of 'em to the Humane Society.

The truth was - Tobey was more Persian than his mother's Tabby appearance. He'd stay close to his mother a lot - picking off birds in the backyard of our suburban house in LaPlace, Louisiana.

One Summer day I found Tobey in our garden near the air conditioning unit. He was laid out on his side as if he'd been sprinting. I knew right away he was dead.

Mom said he probably ate freon. That was probably too even though I had a guilty feeling I'd killed him. I used to place in the garden - digging holes, burying weird shit - who knows what eight-year-olds dig up and bury. It's a separate thing being eight. I can't restore the "me" of then to the "me" of now.

Anyway. I balled my eyes out crying at Tobey's funeral. My father, who was not known for his tact, was irritated by my display of emotion. I think I just had an immediate response to the clear-sharp dagger cut off of death - and I didn't want Tobey to be buried. Normal, right?

We did bury him in the backyard. Wrapped in a black plastic bag. No adornment. 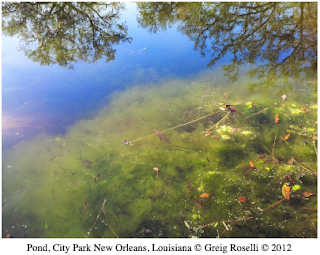 PDF Copy for Printing
Posted by Greig Roselli at 8:15 AM