Why do people despise religion because it is, “man-made”?

In this post, I think about why religion is often disparaged because "it is man-made" — a claim often made by evangelicals who espouse their own brands of religion that typically vilifies mainstream faiths to bolster their own belief systems.
Why do people despise religion because it is “man-made”? Does this presuppose a form of worship that is not man-made? Doesn't it sound odd to you that someone would tout this idea that their religious practice is not religious at all but is protected from man-made shenanigans?
Conversation With a Fundamentalist Christian
I was in the Safeway the other day. Someone was talking about the Catholics next to the $1.00 jug of Sweeeeet Tea for sale.

“The rosary is idolatry. It's man-made.”

“But, it is religion. Not true Christianity.”

“Throw out that statue of Mary in your room; that's man-made and not of God.”
Is Christianity Man-made?
It seems that the crux of the conversation revolved around getting rid of 2000 years of Christian history because it is all man-made.

Don't people realize that religion, no matter what package it comes in: non-denominational, Pentecostal, Wiccan, Zeus, Anansi, Sikh, Tao — it is all man's approach to the concept of God?
Religion Is More Pervasive Than You Think
As far as I know God has not torn apart the skies and told us how she thinks. So, even if you believe your holy writ is God's word it does not place you in a nice cocoon of impunity. You're man-made like the rest of us even if you pray to God in the comfort of your room and eschew organized religion like most people eschew post-dated dairy products.
Religion and Power
Religion is about power. By religion I mean a body of knowledge that supports belief in some form of theism. Religious people bristle at the claim that religion is about power. “Religion? Sure,” they say, “religion is about power. But I'm spiritual. Religion is man-made.” 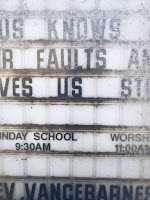 I understand that someone would want to separate out religion from God. I think this is what Martin Luther tried to do in the sixteenth century. The idea that a person can have a personal relationship with God without recourse to a religious structure is the foundation of Protestantism. Not just protestants, but religious adherents in general. We want our religion separate from our spiritual life. To say religion is man-made and spiritual practice is something beyond man is tantamount to saying when I pray to God alone in my room I am participating in something that is not “man-made.” The spiritual person is aghast at religion because of the atrocious things religion has done in the name of God. Holy war, children's crusade, burning witches, convicting Galileo, etc. But how is it that one man's relationship with his bible is any less man-made than a religious organization?
Protecting God from Religion
I find it hard to protect God from religion. If someone says they dislike religion but are spiritual, I become suspicious. What they are saying is, ”I am not like THEM. Those religious people; I just read my bible,“ or ”I just read the Koran,“ or ”I just follow Krishna.“

Christianity, Hinduism, Islam, Judaism -- don’t all these faiths belong to a body of knowledge passed down through the generations. To say I am only spiritual would seem to suggest a rejection of traditional religious beliefs. But no. People do not always think this way. They want their spirituality to be separate from their religion. Religion may be about power -- but only when it is a man-made religion. In other words, my personal relationship with God is not about power. Religion as an object does not exist for a person convinced that spirituality is only spiritual subjectivity.

Isn’t this just another form of power? The power has shifted from knowledge invested in a body of beliefs, namely a religion, to knowledge invested in the hearts and minds of individual believers. The question seems to have shifted from “What is your religion?” to “What do you believe?” The power has shifted from a general to a specific. In the new foregrounding of knowledge-cum-power everyone has a claim to the religion pie. Everyone is a priest. A believer. Everyone is a walking catechism or a moral book. Just open up the discourse on the street. At the pub. Religion may not be all the rage. But personal spirituality certainly is.
It's All Man-made. But Is That a Bad Thing?
I suggest we back away from distinctions between religion and spirituality and recognize that the difference is based on a false premise. Religion, spirituality, etc. — it's all man-made. There is no God's-Eye-Point-of-View. No view from eternity. All we have is the human-point-of-view. So quit your bickering and realize that no matter if you God to Mass or temple, worship in tongues, read the King James over the NIV or go to fellowship on Wednesday nights — it is all just a bunch of humans trying to make sense of a transcendent God. You're not any more special than the rest of us.

PDF Copy for Printing
Posted by Greig Roselli at 3:11 PM