Movie Review: The Time That Remains 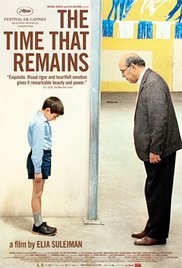 The Time That Remains is Elia Suleiman's autobiographical account of his Palestinian family in Nazareth who lived under the post-1948 sovereignty of Israel. The film opens with the events that led Nazareth to surrender to Israeli forces in 1948. An Iraqi soldier runs through the streets of Nazareth after the Arabs surrender. White sheets of paper rain down from the sky announcing the details of the Israeli/Arab armistice. Fuad (played by a handsome Saleh Bakri), who we later learn is Elia Suleiman's father, is suspected of distributing arms to Arab fighters during the war and is tortured.
Fuad represents stoic resistance. He accepts, albeit reluctantly, his life as an Israeli Arab. Faced with the absurdity of Israeli citizenship, yet a Palestinian at heart, Fuad does not succumb to the malaise that haunts the characters in Emile Habiby's similar Arab-Israeli tale, The Secret Life of Saeed The Pessoptimist. In that novel the son dives into the sea, in desperation. Here, Fuad goes with his buddy to fish off the coast at night, despite the patrols of Israeli officers. He shrugs his soldiers, says yes, when they ask him if they have proper ID, and goes back to fishing.

Fuad is the focus of the film's first and second half. Fuad comes off as tender yet distant, especially when he saves the life of a trapped soldier in a burning jeep on a bridge. After saving the man's life, they are both sent to the same hospital and share the same room. Fuad turns to the soldier he saved, "Are you OK?" then turns his head in stoical contemplation. The film, as many reviewers have already pointed out, is mordantly funny. Fuad's various rescue attempts to prevent his drunken neighbor from self-igniting with kerosene is dark humor.

The director, Elia Suleiman, is depicted as a child, played by Zuhair Abu Hanna, and as an adolescent, played by Ayman Espanioli, and by himself. In all manifestations, he does not speak. He is like a silent film star. Nor does he have to. Hands at his side, wearing the black outfit of a mime, Elia observes the absurdity of a political situation where tanks point their nuzzles at a man taking his garbage out in Ramallah. He watches a band of physicians and soldiers in a hospital corridor fighting over a gurney.

Aunt Olga, who can't see well and makes the worst lentils, provides comic relief. "You must be Elia's double," she says to Elia through her thick spectacles, even though Elia is Elia. The film presents several moments where it seems the characters are doubles. As if they lost who they were and are living replacement lives. Arab Israeli schoolchildren sing Israeli patriotic songs even though they are Arabs. Elia says aloud in class the Americans are imperialists. He is scolded by his teacher. Adolescents from a bridge watch how a frustrated Israeli female soldier fails to hook up with a curious Arab. A schoolteacher rushes in front of the screen while Kirk Douglass and Jeanne Simmons smooch in Spartacus. "He is a brother to him only!" she tells Elia's shocked, but curious classmates. Elia must sneak into his own hometown as a treasurer because he is deemed a political dissident. We see normal but curiously odd denizens of the occupied territories through the quirky, carefully shot lens of Mr. Suleiman. At times I was weary of the clever antics and wanted deeper probing into the inner life of Elia and his parents.

The film captures life under Israeli occupation in witty pastiches. The film is not concerned with a solution. Nor does it seem to take sides. Elia's silence is the only protest. Elia's mother (Samar Tanus) carries on, straightening her husband's jacket before he is hauled away by the police, and at the end of her life after time has passed, (played by Shafika Bajjali) holding on to the photograph of her husband.

The film just opened in New York City this weekend. It's been out for over a year, received a French release, and recognition at Cannes. I am sure it will receive a new life now it has officially been released in the states.

The film confronts the Palestinian Israeli conflict through the perspective of its writer-director. While remaining autobiographical, the film is still fairly historical. As a reviewer has already pointed out, the film deals with heavy themes of statelessness and the brevity of life. Also, the film juxtaposes the absurd with the poignant. I found the shots of Elia with his aged mother the most complex scenes in the film. The scene of the fireworks caught me off guard. The silence of the characters with the eruptions of impressive fireworks was reminiscent of the gap between generations caused by war. Without speaking, the two communicate through a mother/son idiolect that is both touching and readable. Elia will not know Nazareth as his parents knew it nor can they transmit the genealogy of intact past history. The film speaks to the inability of Elia's parents to pass on through family history the memory of what has been lost. The crux of the film is Suleiman's memory of his parents as an "in memoriam" of loss.

PDF Copy for Printing
Not rated. 1 hour and 49 minutes. In Hebrew and Arabic with English subtitles.
Posted by Greig Roselli at 10:13 PM