A Crisp, Sci-Fi sexcapade ushers in the apocalypse. 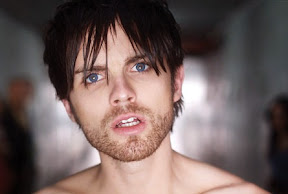 Movies are metaphors for dreams. Or, better still, movies can slip between reality and dream effortlessly. The movie dream is a cinematic exhibition of fantasy. I think David Lynch's fantasy mindbenders attest to film's obsession with dream sequences mirroring reality in strange, bombastic ways. Kaboom! is no different. Just less serious.

Araki's Kaboom! testifies to the surrealistic, dream-like aspect of film with a brief nod to Bunūel's Un Chien Andalou. A shot of a razor blade slicing through a human eyeball sends the message that the movie is a movie about film. Or a movie about film's obsession with dream-like fantastic images. Among other things. I'm not sure what to make of Kaboom!.

Characters eat lunch at a café called, "Ontological Void." Am I supposed to infer something here? What is the void? And how can a void be ontological? Am I supposed to applaud Araki for being both clever and blithely cynical? The protagonist, Smith, (Thomas Dekker) a film student at an unnamed California liberal arts college, pines for his hunky roomie Thor (Chris Zylka), spends a huge amount of quality of time analyzing his dreams, pals around with his Lesbian hottie gal pal Stella (Haley Bennett), experiments with lots of sex (with both boys and girls), and in a zany twist becomes caught up in a cultic conspiracy hurtling towards an end-of-the -world finale which will leave most viewers scratching their heads asking, "huh?"

Considering Araki's most recent films, Mysterious Skin, and his teen apocalyptic trilogy, one thing is for sure: Araki presents teenage sexuality (replete with young writhing bodies) as a domain of searching for self-identity in witty, culturally sophisticated tones. Even though everyone in this movie is crisply gorgeous, sans fault, and indulge in lots of sex, the overall sense I get from the movie is witty intelligence rather than visceral explosion. Just like Mysterious Skin's Cheerios sex scene, Araki films sex to avert the viewer's eye from the hormonal to the cerebral. I'm sure the Kaboom! in the title alludes to both orgasm and epiphany. The Kaboom! as in the comic arts Kaboom! Pow! and the kaboom of explosion, all's well that ends well.

I loved the ending. Kaboom! That's it. The movie is fun solely because it's ending is so self-deprecating. Araki's clean shot scenes of ultra modern college cafeterias and blue-lit dorm rooms all enclose an interesting plot replete with voodoo, magic cookies, witches, cult leaders, men in animal masks, lines like, "it's a vagina, not spaghetti," or "that's nuttier than squirrel shit," or, "Of course. And does Mel Gibson hate Jews?" At the end of the movie all is revealed and it's a satisfying nihilistic romp. It's not supposed to mean anything. Like a nihilistic fantasy, it's an ontological void. Am I supposed to love this movie because it takes nothing seriously? Or am I supposed to feel embarrassed because I just don't get it?

Add the myth of the absent father, the bitchy mother, the desire to annihilate reality, and the deep adolescent urge to live in a fantasy world, then you have Araki's new film.

Beware: the sex is not as titillating as watching "witch girl" evaporate in writhing pain, or close up shots of mac and cheese, snack vending machine turning out chips, or laugh-out-loud special effects more humorous than an Ed Wood flick - but just as corny as John Waters.

Sure to be a cult classic.
* N.B. I am aware that subterfuge is traditionally used as a noun; however, here, I use it as a verb.

PDF Copy for Printing
Posted by Greig Roselli at 2:43 PM