Lesson Plan: An Example of Teaching Poetic Tone in the Classroom (with William Blake's "London" and "Jerusalem")

Class objective:  To continue the theme of Poetic tone by using examples from film and the poetry of William Blake. 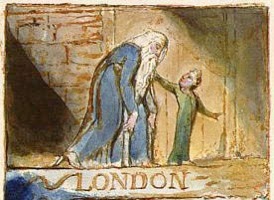 The following class can be tailored to fit a high school language arts course or a college Introduction to Literature, or British Literature section.
The class should have read at home, or in a previous class, William Blake's "Jerusalem" and "London,"

After students have written for 8-10 minutes, ask the following questions:


1. What colors does Blake evoke in his poetry?


2. Does Blake make it possible to imagine the scene, or the place of the poem?


3. What passages from the poems struck you the most? Why?


4. If Blake's poetry were shot as a film, what would his city look like? Jerusalem? London?


After students have discussed the questions, introduce the terms, tone, and voice. Explain to students that poetic tone is the mood, or the emotion the poet attempts to create in a poem.


What mood is Blake trying to set?

Activity:
Explain: in film editing terminology, when an editor may want to set up a scene with what is called an establishing shot.  This scene usually sets up the remainder of the scene by using a landmark or an external image to indicate where the scene will take place; it sets the tone.  For example, in a sitcom, an establishing shot might be an exterior of the house.  The next shot would be the interior of the same house.  The idea is that the tone is set by establishing the exterior of the life of the characters by depicting the outside facade, and then followed by an interior shot.  Usually establishing shots are used for practical purposes; for example, you need to know that the movie takes place in New York City so the film editor makes sure there is an establishing shot depicting the Chrysler building or the Brooklyn Bridge.  But an establishing shot can also set the tone for a film or television show.  You may not realize it but a film is often precisely crafted to elicit a certain emotion from the viewer.  Often, this is created subtly in the film’s use of lighting, the photography used, the angle of the shots, the length of shots, how the film is edited, etc.  Take, again the example of New York City.

Ask students the following question:
How many films do you know that take place in New York City?

Let us look at the differences in tone each of these films evoke, all of which take place in New York City:


Show students two or three pre-selected scenes from films that take place in New York City (you can choose any city, really, but I chose New York City as an example).

Harry Potter
Oliver Twist
When showing the film clips, stop the video when appropriate to point out how lighting effects the mood. For example, look at Superman and how it depicts Metropolis as bright and productive as distinct from Batman which depicts Gotham as dark and dangerous.
"London" and "Jerusalem"

Explain: Blake considered himself a mystic. He said that when he was a child he saw angels in the tree in his backyard. This is important biographical information because it shows us that Blake considered himself a prophetic poet, according to Northrope Frye, throughout his writing career; Blake’s poems are consistently a mixture of narrative verse and prophetic verse. He was also a fierce individualist. He published his own works. His father was a print maker so he learned the trade of printing early on. His poetry is best understood in the context of his printing. The tone of the poems by Blake are interesting because they use elements of both design and text. Notice how the Norton Critical edtion titles Blake’s works, Blake’s poetry and desgins.
NB: It would be a great moment to have books available for students to look at Blake's prints, or display images of several prints on an overhead projector or smart board.
Read out aloud the two poems:
“Jerusalem”
And did those feet in ancient time
Walk upon England's mountains green?
And was the holy Lamb of God
On England's pleasant pastures seen?
And did the Countenance Divine
Shine forth upon our clouded hills?
And was Jerusalem builded here
Among these dark Satanic mills?
Bring me my bow of burning gold!
Bring me my arrows of desire!
Bring me my spear! O clouds unfold!
Bring me my chariot of fire!
I will not cease from mental fight,
Nor shall my sword sleep in my hand
Till we have built Jerusalem
In England's green and pleasant land.

“London”
I wander thro' each charter'd street,
Near where the charter'd Thames does flow
And mark in every face I meet
Marks of weakness, marks of woe.
In every cry of every Man,
In every Infants cry of fear,
In every voice: in every ban,
The mind-forg'd manacles I hear
How the Chimney-sweepers cry
Every blackning Church appalls,
And the hapless Soldiers sigh
Runs in blood down Palace walls.
But most thro' midnight streets I hear
How the youthful Harlots curse
Blasts the new-born Infants tear,
And blights with plagues the Marriage hearse.

In this part of the lesson, the teacher is free to interpret the poetry any way he or she feels fit, or appropriate for the class. A good idea would be to highlight the most evocative lines that illustrate tonal voice, especially how the poems differ in their evocation of a city.

Posted by Greig Roselli at 2:18 AM