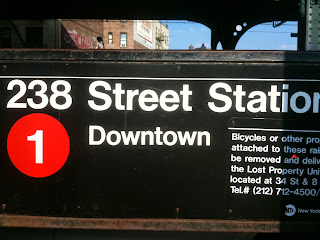 A lost child's mottled gray marble rolls across the car floor like a cliché. A Dominican woman I've seen before on the train remarks to me with rapt concentration, her eyes on the stray marble, not on me. "Someone's lost their marbles," she says and laughs at her own joke, rapping her head with the brunt edge of her umbrella.

The heat in the train is suffocating. Two girls in summer dresses apply make up and talk about a party on 168th street. It's the Monday after the Fourth of July and the town is still on holiday. The evening has done nothing to slake the heat. Shirt sticks to skin. The dry heat sits stale. The air conditioning is barely enough to keep us alive. A female conductor's voice reminds us all that it's hot and if we see anyone passed out, let a MTA employee know. Isn't there a subway car that serves beer? I thought I had read about such a train in the newspaper. The train offers a poem by Robert Frost printed on an advertisement called "Train of Thought".

Has given my heart
A change of mood
And saved some part
Of a day I had rued.

The subway is a cacophony of bodies in motion. Every station is a change of mood. Most people look angry. But it is a quiet anger. A guy about my age, reading War in Peace, totes a cat carrier, but I don't see a cat. He looks up from his book and glares out the window. He seems to say, to no one in particular, "It's fucking hot in this car." It is. I agree. But heat is nothing exciting to write about. The marble rolls by again, hitting against a boy's skateboard. No one else seems to watch its trajectory quite like the familiar Dominican woman. Every time it rolls by she laughs and points to her head, then at me.

An announcement blares from the conductor, "We're being held in a state of supervision." The guy with the cat and Tolstoy rolls his eyes as he reads. I think I heard the conductor correctly. A state of supervision? I knew New York was a nanny state, but come on, this is ridiculous. I situate myself in the seat and prepare for what can only be a state of supervision. Nothing happens. The train sits in its own heat for thirty seconds and then lurches forward again, Bronx bound. Seasoned New Yorkers remain upright. The marble rolls again. If this were the Marble Hills Station, I'd add another joke to the already stale punch line.

I disembark at the 238th Street Station, the next stop on my writing tour. A Manhattan bound train enters the station seconds after the Bronx train leaves. The train's shadow sparkles light on the exterior wall of a Rite Aid. The structure of the track allows light to flicker through the duvets to create a modest spectacle of sound, light and movement. A policeman guards the platform. I am reluctant to linger, for fear he may ask questions. I carry a black Moleskine to take notes on my subway rides. I am a bit paranoid that he may ask me what I'm writing, so I take the stairs to the street level. This station is similar to every elevated platform station on the 1 line in the Bronx. The façade of the station is the same train station-depot-look that parades the station at Van Cortlandt Park and Kingsbridge.

This station does not sport the same scenic look as Van Cortlandt Park did on Fourth of July. In fact, I immediately get the sense this station may perhaps be the most least populated station on the one line, if not, the entire MTA system. The buses are packed, though, and people seem to navigate mainly in cars.

I  am not an investigative journalist type. I do not intend to riddle people with questions about their neighborhood. My subway writing project is simple: I am not so much interested in description, as I am in impression.

My stomach growls. I am on a budget so a pizza looks good at Mario’s. Two Italian adolescents chat on a bench in front of the restaurant. The pizzeria is empty. The bee line bus to Riverdale careens by filled with passengers. When the boys see me they jump up and walk briskly inside to the check out counter. “Hi,” the younger guy says, obviously revealing to me that not only does he relax on the bench outside like a customer, he also works at the place. His accent is most probably Bronx. I can't tell the difference between the Bronx and Brooklyn, New Jersey or Queens. It all sounds similar to me. The guy talks really fast with a cheerful lilt. A quiet Chinese guy sits on a bench in the kitchen. A weathered woman with bleach blonde hair, perhaps pretty in 1981, sits at a booth with two girls. I order the Meat Lovers. I’m hungry. And a meringue soda. I love glass bottles. Bottled in Brookly, the label reads.

“I got to cook up the bacon and sausage for your Meat Lovers, OK?” the boy says. I nod in acquiescence and take a seat to jot down some notes. The boys and the Chinese man (who never emits a word) make my pizza pie. The place is empty, as I said; it is not the typical New York scene. Few pedestrians, if any, walk by. I eat the pizza with menace. Drown the meringue soda. Get up to pay, and the weathered woman gets up with me. I think she’s going to ask me for money. She doesn’t. She goes behind the counter. Her kids sit in the booth and play with each other’s hair. The boys are on the bench laughing and playing with their cell phones. “That’ll be $3.50.” After I pay the weathered woman, figuring what the hell, whom I assume also works here, the Bronx boys come back in the store, grin, and tell me, “Stay cool buddy, cuz it’s hot.”  I imagine this joint is their summer job. They’re happy to have a customer. Maybe they just graduated from high school? The woman stands proud at the cash register. A silver sedan pulls up to the curb with several of the boys' friends. I wonder if I am the only customer they’ll have tonight? Feels like I just ate a pizza pie in a Bronx house on 238th street instead of a restaurant. Despite the heat, I am in good spirits. The shadows of a moving train appear again on the Rite Aid façade. I dance a bit in the street, the Merengue flavor still hot in my mouth. Sitting down again in the subway card, the air conditioning has never felt this good.

Posted by Greig Roselli at 6:37 PM