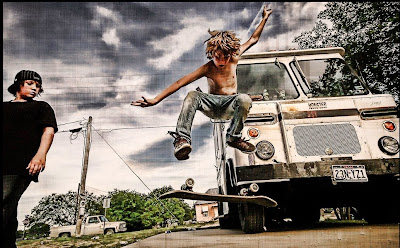 BMXers are better for sure.

BMX is an art.

Skateboarders just have that one board.

Bikes are intricate. Gears. Pedals. It's a craft.

More technical and you have to work 'em out.

But skating is like negative space. It is about the nothing between you and the board.

You know what I mean.

The skate park is empty except for Neil and Bryce. Neil kicks at the open gravel with his worn out tennis shoes. Bryce pumps air into his tire. The day is harsh. The air smells like turkey sandwiches and mace. The old garage-turned-park is grungy. A huge peace sign adorns the back wall. Metal siding decorates the corridors. The skate shop is closed. The place is closing down.

Hey guys, we're closing the place down. Time to get out.

Bryce props his bike on the descending floorboard. The ground is uneven and raw. The place used to be a boat building company. Recently constructed by a Ph.D. student in urban planning to ostensibly curb violence and drug dealing, kids come to hang out mostly on weekends. Bryce walks his bike up the ramp. Saddles his bike as if it were a well-trusted friend. It is the force of gravity that propels him. The downward swoosh. His body does nothing. The bike moves with the flow of the earth's downward pull. Braced to the bike like a friend, he kicks off the ledge. The ramp takes a novice biker to the ground fast. After a few tries, you learn the ramp. You learn, like a Zen koan, the simplicity of the curves. The ramp is like a parabola. Arriving, at the other end the rider gives himself the needed push to make the trick. It is at this point the rider must fight gravity's pull and not let it take him. Bryce leverages the bike a bit to give it the control he needs, kicks it up and he is flying through the air as if he were to stay afloat forever. Nothing enters. His mind is a blank slate. As if he does not exist. That's the nice thing. The erasing of thought, he thinks. You don't have to think. Bryce hits the rough edge of the board's terminus. He spins the bike around on one wheel, bringing himself to a stop; adrenaline, like a rush from inside of him escalates and he wants to go again.

Dusk is like charcoal. Both friends depart. Neil does an ollie in front of the ice cream van, as if to say, "Fuck you." And we get it then. What Neil said. It is the empty spaces. It is the nothing that exists between me and the board; the ramp and the air; my bike and everything else. Maybe I get it maybe I don't. The dude who owns the van is yelling at Neil. Neil laughs. We all laugh and joke on our way home about Bryce's stunt.

PDF Copy for Printing
photo credit: if this image is yours please contact me so I can give you proper credit.
Posted by Greig Roselli at 8:05 PM