Religion and the Simpsons

“Please, do not offer my god a peanut.”
(Apu to Homer, after Homer offers a peanut to a statue of Ganesh.) —

Religion is a topic my buddy Ryan loves to discuss, even when I am exhausted and devoid of argumentative spunk. He especially likes to expose inane postulates; for example, he told me about a moral paradox he noticed about his Southern Baptist roots. In the Southern Baptist culture it is a sin to cheat on your wife, or sneak a brewskie on a Sunday before church, but none of these sinners would ever publicly deny God's existence. "In other words," said to me, sitting on my deck chair nursing a glass of OJ, "you can fuck your wife's best friend but you can't be an atheist."
Religion follows its own fuzzy logic. "Do not offer my god a peanut" ok? What about, don't eat for one hour before holy communion? Or, if a man spills his semen on the bed during sex he has to atone for the loss of his potential babies? Homer may have offended Apu by giving Ganesh a peanut, but in the world of religion, it is not that difficult to make a faux pas.
A couple of Mormons paid a visit to my apartment yesterday; I offered them a coffee and I noticed the smaller dude glanced apprehensively at the other one; after a second pause, they both said, "Well, that's another thing about us -- we don't drink coffee." "Ahhh," I said, "What about a gin and tonic?" and laughed but they didn't laugh with me. I honestly did want to see if they were interested in sharing with me other details of their faith, but I had a dental appointment so I had to shoo them off; and they were so adorable! I should not have offered that peanut, I said to myself. 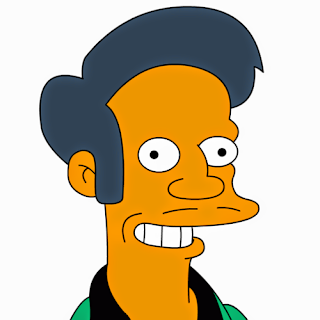 Religion is ingrained in our nubile minds from the moment we enter into language. We are submerged in religion, with its weird taboos, and semantic boundaries; it is next to impossible to break water and gulp air, to turn back and look at how religion affects us unaffected. It is only a rare occasion when religion is seen outside of context, can we begin to notice its arbitrary and illogical nature. We seldom think of our own faith tradition as flawed, even when we intellectually forsake it.
In Amitav Gosh's book In an Antique Land, a memoir about his own anthropological study, living with a group of rural Egyptians; he a Hindu; they, Muslim. In a funny exchange, Ghosh attempts to explain why Hindus revere the cow and the belief of reincarnation. Set up in the village to examine and write about the people for his dissertation, Ghosh ironically is questioned by his host group on his own beliefs in a humorous reversal of roles. The experience gives him (and the reader) a rare opportunity to see his own faith upbringing from the viewpoint of an outsider who is allowed to express their unsolicited opinion unfiltered by secondary commentary.
I can remember as a teenager feeling undeniably that I would go to hell if I entertained a homosexual thought. I never thought that maybe -- just maybe -- it was all balderdash. Well, I did. Of course. But, I could not shake the anxiety that I would be punished. It probably took a few years to untangle a belief that gays were impure and their actions merited them punishment. Even though intellectually I knew that when a pastor condemned gay behavior, they were wrong, it was yet another thing entirely to unravel my emotional (or psychic) adherence to what I had believed to be truth.
Once the mind grasps a concept as true -- both in the heart and in the head — it can be very difficult to unravel the thought process. Even though we say metaphysics is dead -- I believe when it comes to religious thought -- we are a metaphysical society. Truth is substantiated by divine revelation. Just as my friend Ryan could sin and still be forgiven -- the one sin he could not commit was to disagree with the standards of truth set up by the Christian doctrine.
I was teaching the Ramayanna a few weeks ago to my freshman English class. The story is about the hero in a cosmic battle (aided by supernatural monkey hordes). In the story he prays to the god Shiva to bring down destruction on his adversary Ravana. One of my students raises her hand, asks genuinely, "But, why didn't someone tell Rama to pray to God?" I laughed and said, "Well, what if someone came to you and said, 'you know, why don't you pray to Shiva instead of Yahweh? What would you say?"
PDF Copy for Printing
Posted by Greig Roselli at 12:27 AM