When my dog Maggie died, I wrote her eulogy.
When a girl reaches that age of sweet sixteen uncertainty, my girl has reached the age of mortal certainty, her skeleton worn out from a teenaged span of use, her gauzy eyes barely seeing, her ears clotted with wind, her matted hair uncombable — she sits in the living room panting, refusing water, wagging her tail nevertheless.
She was a Humane Society special. $50. That’s what she cost. Including her shots. Nick was 9. I was 11. Brad was like 16. Brad, Nick and I picked her from a mixed bitch’s litter, the babies all scrunched up beneath her teets, we picked the one — eyes still kinda closed — who had the personality we were looking for, independent but lovable.  Mom was concerned, “How big is she going to get?”  The vet assured us this dog could be a house dog (She ended up being an outside/inside dog).  She was a Springer Spaniel mix; we didn’t meet the father. And the mother is a strange memory -- because why would I remember her, the dog who bore my baby when I myself and my family would become a mother to this mutt? Maggie is the name we gave her after severe brainstorm in the living room.  We called her many titles over the years.  Fat girl, we called her. Pretty girl. Morga. Maggie. Morgus. Thing. Baby. Hey, baby. Mooga. Maggie Roselli. Maggie the Magnificent.
Her first night we were afraid she would shit all over the house, so we put her in the bathroom and shut the door. She cried all night. I slept in the top bunk, being older — and Nick slept on the bottom. Both of us heard Maggie’s cries. She hated being by herself. Even till the end. She hated it. She would prove to be a dog who followed you wherever you went. Just to be with you. So she wouldn’t be alone.
She would get on a kneeboard in the Tchefuncte river just so she would not have to wait alone in the boat. She followed Nick and I to the bus stop — and sometimes attempted to get on the bus!  She went with me into the woods and we got lost a few times.  We were off the beaten path; we had gone into the woods to eat blackberries; I turned to her — as lost as she was — “Maggie, where are we?” She just looked at me, crushed chlorophyll frescoed into her face.
We finally got out of the woods, onto a country road a few miles from the house.  She didn’t complain.  And just a few years ago — in her later years — she followed Zack and I to town.  It’s a long walk to town but Maggie insisted she come along.  When we got to the river she walked down the algae-covered concrete steps and got soaked; she loved it.  But when we got to the hamburger shop near the main drag and I tried to get Maggie some water from the clerk, Maggie wanted to get inside into the Air Conditioning.  Her tongue was panting so painfully, that it almost reached the ground.  But I wouldn’t let her.  She looked like a sea hag come from her morning bath.   She waited behind the paned glass door and at the first moment she got she squeezed past a customer and showed up by my side.  She scared a lady exiting the restaurant. “Get that thing away from me!”  I have to admit, inadvertently, Maggie looked menacing.  I pretended she wasn’t my dog, but when the owner asked whose dog it was, Zach turned me in, “It’s his dog,” pointing directly at me.  I picked up Maggie and cradled her sloppy wetness to my dry shirt and walked out.  We called a cab; they charged a canine tax.  Bastards.  Zach loved it.  So did Maggie.  I don’t think I let Maggie follow me on my walks ever again. 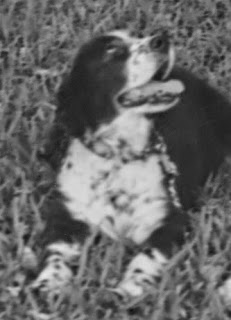 ***
She’s sitting in the living room. In her sixteenth year. Her liver is out. No protein in her blood. She’s 44 pounds.  She used to be 90 or more.  If we don’t do anything, she could linger for weeks, the vet says — her problems are muscular-skeletal, not infectious or anything like that.  She’s just old. I could have euthanized her, the day I brought her to the vet. I had brought her to the vet just a few days earlier.  It took me an hour to pick her up from the floor.  She could sense my fear.  And didn’t want to go.  But her soft teeth were hardly preventative.  I picked her up by sliding my arm underneath her chest, then her belly.  Her belly was cold.  And once I had her in my arms she calmed down.  I carried her to the car and placed her on her side.
I couldn’t do it, though once I brought her.  I said, “give her those steroids” — let’s see if that works.  Give her one last boost.  $80 worth.  But it only made her urinate on herself.  She’s pitiful.  I’ve given her every chance to live.  I feel like I have done the ethical course of action; mom laughs and says, “Ok, Br. Bede,” because she knows I’ve switched to monk mode.
Mom wants to euthanize her. The vet agrees. So does Nick. If Brad were here he would probably agree too.  And now, so do I.  So, we decided to bring her.  Mom brings her, actually. I had told her goodbye, putting my nose on hers.  She looks at me listlessly.  Her tail wagging a little.  She can’t even get up to pee. She refuses bread, her favorite food. When Mom picks her up she is scared, snapping with her soft teeth -- she hates to be picked up. She also hates it when you touch her front paws.  That’s because Nick used to drag her around by her front paws.
Mom says she was there when the vet injected the poison.  It takes two seconds.  Really.  They do it all at the vet.  They cremate her body.  Dispose of the ashes, or for an extra fee, you can deposit the bones in a porcelain dog for your mantlepiece.  To cremate our dog cost more than what she initially cost.   Thought I’d put that in print.
We decided to place an effigy of Maggie next to Smokey, our cat; Brad had buried her and placed a cat on her grave, underneath the Water Oak. To you Maggie: with love.
PDF Copy for Printing
Posted by Greig Roselli at 7:31 PM