Feast of Saint Benedict — Photos of Work and Community from My Time as a Benedictine Monk (c. 2004)

Today is the feast day of Saint Benedict of Nursia, famous cenobite who, 1,500 years ago, carved out a rule for people to live together in community, living by a rule of Ora et Labora. I have been rummaging through old thumb drives, hard drives, and forgotten folders on my Google Drive and I have managed to come across some interesting finds that date back a decade or so — back when my life was a Benedictine monk in south Louisiana.
I had a Canon Sure Shot camera back then — and I would get my hands on black and white film and take photos of life in action. These photos are of jobs that I undertook when I was a relatively young monk in temporary profession (which means I had not yet made my final vows). At twenty-five years of age, I had just made my profession, and my life was caught up in the rhythm of work and community living. 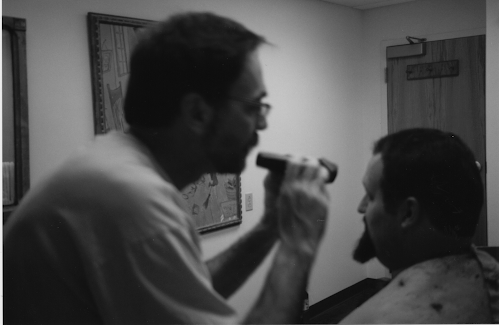 We had a small barbershop in the monastery. If someone wanted a haircut they asked Br. Elias or Fr. Ambrose — and voilà you got a haircut. No need for SuperCuts.
***
Ideally, everything is provided for in Benedictine communities. People who become Benedictines often bring with them their skills. We had bread makers, honey maker, vintner, pianist, writer, and farmer. Famously, the community I lived in had hosted a Flemish monk who was a famed artist. This was in the 1940s and 50s. Dom Gregory Dewitt, O.S.B. painted the murals in the monks' refectory (e.g., the dining room) and the church. But he also painted small curiosities that one could still find. In the barbershop, where I had my haircut many times, there was a wonderful painting on wood of "Christ's First Haircut." It depicts an almost Norman Rockwell-esque version of the Holy Family. Christ has placed his halo on a nail so his father Joseph can cut his hair. Mary sits in a chair nearby sewing a piece of cloth, and an angel sweeps the floor!
Often we would have to go to the nearby town to run errands, or to bring older members of the community to a doctor's appointment or to go shopping for this, that, and any other thing. 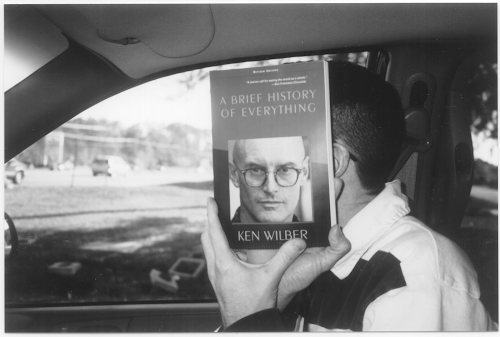 I invented "Book Face Friday" way before its adoption on social media. In this photograph, taken sometime in 2004, I had Br. Bernard take a photo with a cover of a book I was reading entitled "A Brief History of Everything".
***
Sometimes in the evening after prayer, we would have small group activities, like one night a week, we did poetry readings. I don't remember much of what we read, but I remember it was heavily attended by some of the older community members, so it made me become more familiar with caring for Senior citizens. I fondly remember Fr. Dominic and Fr. Stan who were consistent members of our poetry reading sessions. Fr. Dominic had been poised to enter the world of operatic drama and singing but he ended up joining the community in the 1950s and was a strong supporter of Civil Rights and liturgical reform. He had a booming baritone voice, that he used proudly. I took him on many outings during my time, and while we were never really close friends, I think he appreciated how I initiated creativity and sparked his more associative thinking process. Fr. Stan had lived in New York for many years as a parish priest, but when he retired he came back to our community in Louisiana. I remember he was soft-spoken, sometimes passive-aggressive, but he was a writer, especially of poetry. I wonder where his writings are now and whether any of his stuff was published? 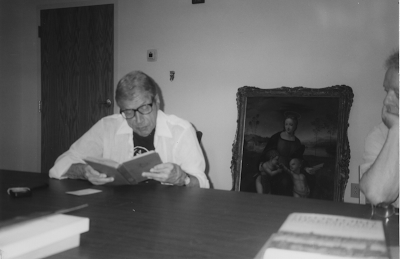 After dinner on Sundays, it was considered a more-or-less-leisure time. We could talk at table (while eating dinner), invite guests, and have a beer or a glass of wine. After dinner, each evening, one of us was assigned to wash dishes — which was a fun job — because we used this industrial strength dishwasher! 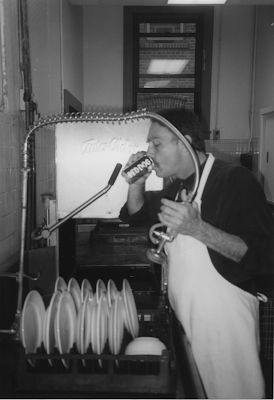 Outside of the monastery building were a set of benches where we could relax, talk, and if people were smokers, they could smoke. 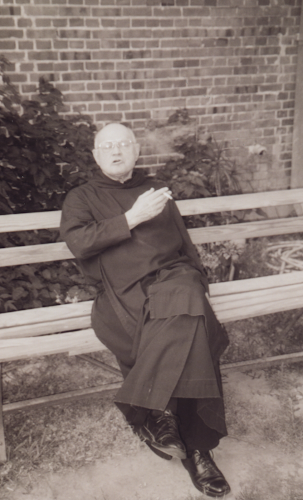 Although most of us were not allowed to smoke, because the Abbot made a new rule saying younger members had to quit smoking, but those who had already developed the habit were silently allowed. Those were the rules.

In the kitchen, we had a crew of workers, some from the outside, like this woman — her name is L. and I remember we used to talk a lot about her children. 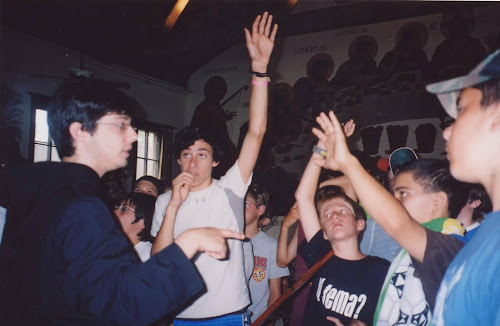 For a couple of Summers, I was part of the camp program — where we had campers from across the state come in for weeks at a time; they stayed in a campground, replete with a chapel, cabins, swimming pool, dining area, and a Pavillion — about a quarter-mile from our community, but still on the property. On Sundays, the kids would come to the church for Mass and I would give a tour of the buildings, pointing out some of the features of Dom Gregory DeWitt's artwork. I love how in this photograph I have most of the kids' attention.
Lagniappe (More Photos)
Click the link to read the rest of this post!!
Posted by Greig Roselli at 4:12 PM 3 comments: