In this post, I wax nostalgic about a class I took in high school and how it taught me something about human motivation.

"You'll need to collect one-hundred specimens of native flora from Louisiana to gain a perfect score for this project," intoned our Biology teacher — I was in Eleventh grade. I had opted to take a class called Biology II rather than Environmental Science. It was unlike me. Having gravitated more to the arts and humanities, even in high school, taking an advanced science class went against the grain. But it was one of the most immersive courses I took in high school. I liked the botany unit. We had an entire semester devoted to exploring indigenous plant species of Louisiana. I had even gone as far as to purchase a used copy of a field guide to plants of the state; "Don't collect invasive species," our teacher had said. So I wanted to make sure I knew the difference between Kudzu and an indigenous Wood Sorrel.

I put my heart into the project. With my field guide in hand, I combed the thin strips of woods that separated neighborhoods; I examined plants and looked closely at leaf and stem characteristics. I learned words like "deliquescent" — the word to describe a tree that has developed a finely developed branch covering resembling a cup (most often happens when the tree grows in an open field without competitors to challenge its airspace). Or that a leaf that has a soft "hairy" layer is said to be tumescent. Looking up these words in a standard dictionary, I found that these terms, while having a general meaning, also have a specific sense in botany. For example, I can say deliquescent to describe how water absorbs evenly into the soil from moisture in the air. And use the word tumescent to describe the soft hair that covers a newborn baby. Words are so multifaceted, I thought to myself then — and still realize to this day. It's a concept I often try to impart in the classroom: "Kids, vocabulary knowledge is closely tied to how it is used in the text."

What drives motivation? What made me so motivated to pursue a task that before I had taken it, I would never have followed on my own? Most likely, it was the challenge of the project. Something about discovery: and the idea that I had to explore areas outside the boundaries of my neighborhood or looked closely at the familiar. I don't remember what my classmates did for the project; I don't recall working with a partner.

I had my parents purchase for me a ginormous three-pronged binder and a bunch of styrene protective covers. To successfully save a plant specimen, it is necessary to place the plant parts into a book or under a newspaper fastened with something heavy — like a book or a rock. It can take days for the specimen to set properly — our teacher had specifically said that if you don't let the plant sufficiently dry out — it will rot and produce mold once you seal it in the binder covering. The first few plants I had picked out delivered such a fate — I didn't press them long enough — so afraid of having points deducted from my project, I did them over again.

I was diligent and methodical with this project — I managed to collect about ninety-eight specimens — everything from Sweet Bay Magnolia to a Pitcher Plant. I noticed how invasive species could completely take over an area, their massive and quick growth, quickly suffocating plant diversity in the area. This specific invasive plant called Chinese Privet — I found lots of those everywhere around my backyard. Seeing the ubiquity of certain herbaceous plants made me realize the destructive force of nature when human intervention is too rapid, and Mother Nature cannot keep up.

Motivation is tied to relevance. If you can tap into the significance of a task, then you have your student's attention. Make a task too easy, and it loses its relevance; make a task unattainable, and it becomes a chore. I like how my teacher implied that the project had a perennial aspect to it; I still have that binder from high school. And I still have the plant species; they are labeled correctly and nicely preserved.

It wasn't an easy task, but it promised discovery. So finding a rare plant species proved to me a gleeful moment — filled with joy, as on a particular jaunt into the woods behind my mother's house in Madisonville, Louisiana — I found a Devil's Walking Stick — properly named because if you pluck it you will automatically be stung by its many sharp prongs that line its length. Walking deep into the woods, I came across a bayou that flooded its waters often when rain fell heavily, which gradually seeped back into the ground or wended its way back to a tributary and then into the Tchefuncte River and then finally into Lake Pontchartrain, which is an estuary that opens out into the Gulf of Mexico. Everything is connected. I knew then and know now.

As a teacher myself, I now give students projects and written assignments, as one is wont to do as a teacher. I have never given out a botany project like the one my science teacher did for us — but I marvel at what motivated me to complete such a project so painstakingly. I sometimes joke with colleagues that if someone were to crack the code of what truly motivates people to be industrious, creative, or simply do work — especially work that at first glance does not seem necessary — they ought to win some kind of Nobel Prize for Ingenuity. I never went into Botany — heck, in college, I only took a handful of Science classes. The bulk of my undergraduate course load was filled to the brim with Dante and Kazuo Ishiguro — with ample servings of Plato, Aristotle, Thomas Aquinas and Shakespeare — can you tell I went to a heavily Western-centric liberal arts college? But I never forgot my foray into botany. That project stayed with me over the years. I still remember the scientific names of certain plant species — for example, Live Oaks and White Oaks — and all oaks — belong to the Quercus genus. And figs are in the ficus family. And if you take a walk with me in the woods, I will revel in the joy of discovering a field of Crimson Clover — it's still a beautiful flower. 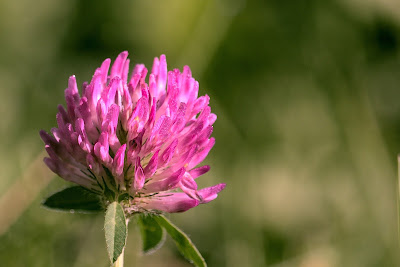 Photo by Dmitry Grigoriev on Unsplash
PDF Copy for Printing
Posted by Greig Roselli at 10:48 PM No comments: