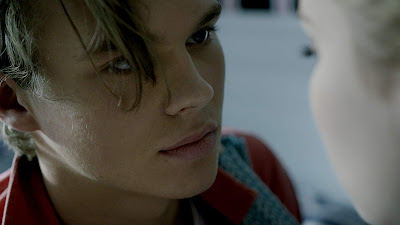 The Short Film "Broke" - 2017 (35 minutes, in Norwegian with English subtitles)
Norwegian Filmmakers Make Another Short Film About Something Not Quite Right in Norway’s Affluent Suburbs
Filmmaker Bjørn Erik Pihlmann Sørensen and screenwriter Einar Sverdrup have teamed up and made a new short that serves as another installment in what looks to be a series of movies about the hidden underbelly of Norwegian suburban society. I reviewed the duo’s short film Reckless in June. It’s a troubling film about responsibility, desire, and sexual exploration gone awry. You can read my review here. I don’t want to play a game of compare and contrast. I will write about Broke using a more or less reader-response approach to interpreting a work of art. What I will do is look at the film as it stands, first, and what I think it is trying to say. Then — if I am so inclined I can make stray observations that lend itself more to how it opens a dialogue with its predecessor Reckless.
Here is my review of Broke:
Broke is a story of how a rather well-to-do upper-middle-class family deals with the prospect of going bankrupt. That is how the movie has been packaged — and it is the expectation I had going into watching it. Full disclosure: I was able to view the film by way of the filmmakers (since the movie has not yet been made available for full release). Mr. Philman sent me a screener (for which I am very grateful). Broke is still making its presence known at festivals and in special screenings around the world; It will debut in New York at Cinema Village and run from August 16-22. As many independently funded projects go — the movie is hoping to get picked up for a wider release.

The Anticipation that Something Bad is Going to Happen
Sometimes a movie wants desperately for you to think something awful is about to happen. And Broke is a movie just like that. Someone puts a weapon in a backpack. But it is not revealed who. A married couple fight in their bedroom thinly keeping their row secret from the kids who are supposedly sleeping down the hall. I expected violence to ensue in just the first few minutes of watching this movie. It begins taut and on edge. And I must say the movie freaked me out because for the majority of its storytelling it hugs close to a school shooting narrative (a horrifying series of hells Americans have been facing since Columbine).I had this sense of foreboding since a large chunk of the story follows young adolescent Pia (Sofie Albertine Foss) as she goes about her school day — a little uneasily. In fact, everyone in this movie seems very much ill at ease. No one is enjoying their current dispensation. Pia is enormously bright but chooses to hide her gifts and gives off the appearance of a wallflower. She is an observer, watching Daniel (Marcus Rix), a hunky boy, a bully who taunts a smaller boy, Jonas (Arthur Hakalahti). Daniel belittles Jonas with impunity, and in one unsettling moment physically harasses him in the school swimming pool. The film presents us with long shots of Pia, Daniel, and Jonas — and other kids and adults who inhabit this school. I did not pick up much joy; the blasé nature of adolescent Je ne sais quoi seemed grossly disproportionate here. The kids in this film are candidates for something very bad about to happen. But we don’t know what. Or how. The film teases us a bit; the Checkhov gun is literally a gun but we don’t know how it will turn up and what character will possess it or use it or whether someone will cause harm with it.

We do eventually get the answers to these question (sort of) — what work the film does before it reveals its hands is to get us to know these three disparate teenagers a little better. Pia shows a need to withdraw (as, for example, when she tells her teacher she does not have her swimming suit with her). She sits in the bleachers instead and watches events transpire. Jonah is the picked-on kid. The pariah. Pia shows concern for Jonas; Daniel is all masculine bravado and “I don’t give a f***.” However, Pia is drawn to Daniel like a moth to a flame. And here is where the film pivots.

An Aggressive Sexual Encounter Holds the Middle of the Film
Pia joins Daniel after school; first, berating him for being a bully, and actively standing up for Jonas. But Pia takes the bait and follows Daniel to his house, and we and the camera are made witness to an awkward sexual detente between the two characters. But is it really? When Pia tries to put a stop to Daniel’s advances, he turns on her. And Pia leaves, angry and frustrated. Daniel cannot stand to be rebuffed; his retaliation is to call Pia “a slut.” Watching this interaction between the two characters I was taken aback. Where is the story taking me (us)? Daniel is aggressive and he outrightly makes a move on Pia; he is physical and rough and he exposes his body to Pia and to the camera, wanting her to perform oral sex on him. The camera does not turn away. I was relieved when Pia, deciding not to have sex, leaves Daniel’s bedroom. She makes a choice — and then the movie changes directions again. Hints are dropped throughout the movie that it is Pia’s family who has been hit with a financial blow. Her father has lost a significant amount of money (presumably through bad investments) and is forced to have to shed his assets and move his family to a different city to survive. Pia is shattered by this revelation and she is processing what this means for her. I do not want to reveal the ending because I think this is a film that deserves to be watched from beginning to end. I will tell you that I found the climax to be teeth-grinding; I had to turn my head away from the camera. Something awful does happen in this movie, but something is also restored. But it takes a lot of pain and pent-up frustration to get there. Checkhov’s gun is revealed in the end — but the gun does not end up being quite what one thought it would be. The movie ends with deep sadness.

What is Broke Trying to Say?
A key to the movie’s inner logic, I will say this as a closing, comes earlier in the film — when the kids are in class and the teacher is proceeding to dole out an ostensibly boring lesson on the fall of the Roman Empire. The teacher asks his class, “What would you do if you had no money?”. His question falls on deaf ears because the kids in his class do not know what it means to be truly broke. They are blithe in their privilege and I get the sense, watching the film, there is a lost ability to deeply care. I am a teacher so I get bored high school students. And suffice it to say — the teacher doe not try hard to entertain his classroom. But that is the point. He plays the part of the Cassandra of the film; he lays bare what happens when a society has a fiscal collapse. It turns in on itself. And it is then, watching the movie a second time, I realized what the final scene is meant to explore. What happens when society itself “runs out”?

Stray Observations
“Broke” is screening at Cinema Village from Friday, August 16 to Thursday, August 22.
PDF Copy for Printing
Posted by Greig Roselli at 10:14 AM 2 comments: