"Rats!" by Robert Browning (excerpted from the Pied Piper of Hamelin, 1842)

Do you love rats? Read a delightfully bombastic excerpt from Robert Browning's 1842 poem "The Pied Piper of Hamelin".
Rats!
They fought the dogs and killed the cats,
And bit the babies in the cradles,
And ate the cheeses out of the vats,
And licked the soup from the cooks' own ladles,
Split open the kegs of salted sprats,
Made nests inside men's Sunday hats
And even spoiled the women's chats
By drowning their speaking
With shrieking and squeaking
In fifty different sharps and flats . . .
Robert Browning, excerpted from The Pied Piper of Hamelin, 1842

Works Cited
Posted by Greig Roselli at 6:30 AM 1 comment: 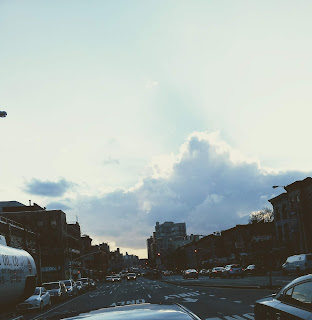 Coming up out of the southwest staircase on the corner of Forty-Fifth Street and Fourth Avenue the rest of the world radiates in every direction. Looking north, the Watchtower building is somewhat visible; Have you ever been visited by a Jehovah's Witness? Well, they get their pamphlets from that building. Or they used to at one time. I think the Jehovah's Witnesses moved shop. Looking South, if it is a clear day, (you can see tomorrow) you can see the Verrazano-Narrows suspension bridge looming like an excessive decoration on a child's birthday cake, all silver and toy-looking. Peering West down Forty-Sixth Street first one is struck by the entourage of cars lumbering along the Gowanus Expressway, a green-looking overpass that stretches itself from Gowanus and Red Hook along Third Avenue to Sixty-Third Street and then it veers East. Just beyond the expressway, if you peer hard enough, you can see the rough-hewn sparkle of Lower New York Bay.
Click the link to read the rest of this post!!
Posted by Greig Roselli at 5:07 PM 1 comment:

Book Review: The Broom of the System

David Foster Wallace does a grand job of showing ornate language and its simple substitutes. Who is better, Mr. Bloemker, with his arcane, long, jargony way of speaking, or Lenore, with her simple quips phrasing what he meant to say in two or three words?
Lenore Beadsman's great-grandmother Lenore Beadsman goes missing in David Foster Wallace's novel The Broom of the System and this is the conversation between her and the nursing home director, Mr. Bloemker about her great-grandmother's whereabouts:


[Mr. Bloemker:] "What I have been able to determine is that at some point in the last, shall we say, sixteen hours some number of residents and staff here at the facility have become . . . unavailable to access."


[Mr. Bloemker:] "Yes."
. . .
Bloemker took a deep breath and rubbed a gold eye with a white finger. In the air around him a whirlpool of dust motes was created. It whirled.


[Mr. Bloemker:] "There is in addition the fact that the resident whose temporary unavailability is relevant to you, that is to say Lenore, enjoyed a status here — with the facility administration, the staff, and, through the force of her personality and her evident gifts, especially with the other residents -- that leads one to believe that, were the mislocation a result of anything other than outright coercion on the part of some outside person or persons, which seems unlikely, it would not be improper to posit the location and retrieval of Lenore as near assurance of retrieving the other misplaced parties."


[Lenore Beadsman:] "I didn't understand any of that."


[Mr. Bloemker:] "Your great-grandmother was more or less the ringleader around here."

Posted by Greig Roselli at 9:45 PM No comments: