Three Observations from People Watching on a Recent Trip to Washington, D.C. 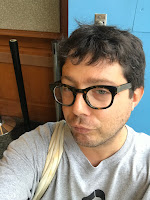 In this blog post, I recount conversations overheard and undertaken on a recent trip to the nation's capital.
At the Penn Station Amtrak Waiting Room, N.Y.C.
Two women from Nanjing ask me how to find the track in Penn Station for their Amtrak train to D.C. The women are surprised I know how to say "Hello" in Mandarin. Coincidentally, I am boarding the same train, so I help them out. *** On the D.C. Metro
Two deaf teenagers have an in-depth conversation in sign language at the Gallery Place-Chinatown Metrorail station. Their signing is rapid-fire, and they apparently have a lot to talk about. I feel happy for the two of them. ***
N.Y.C., Penn Station Food Court Two would-be customers in the food court at Penn Station at 10:15 in the morning are slightly miffed that KFC and Pizza Hut aren't open yet. ***
The Neighborhood of Anacostia in D.C. When I board the train at the Anacostia Metrorail station, I notice two five-year-old kids seated side-by-side on the train. One of them wears a charcoal gray t-shirt that says: "Cheer up, Dude."
***
East Hall of Union Station, Washington, D.C.

In the East Hall of Union Station, waiting for a friend, I watch two professional photographers take photographs of the station. I am inspired to take my own. Creativity is contagious.
PDF Copy for Printing
Image Credit: Greig Roselli © 2018 East Hall, Union Station, Washington, D.C.
Posted by Greig Roselli at 10:17 PM No comments:

"Apparently" and "Weird": A Report on Colloquial Usage

I overheard a conversation on the subway today between two college kids: "It's weird, you know, apparently she was his girlfriend, but now it's so awkward, I'm like whatever."
The words "apparently" and "weird" have taken on a nuanced meaning in contemporary Americana. Jonathan Franzen, in his novel Freedom, first alerted me to the phenomenon of "weird." Everything Patty Berglund notices that should be contested, like her son living with the next-door neighbor, instead of in his own home, is just weird, she says. Anything Patty Berglund doesn't like, "it's weird." The neighbor flicks cigarettes from her window into the baby pool below. Patty Berglund just says, "It's weird."

"Weird" no longer means oddly strange or not normal. Weird is a catch-all phrase for anything a person doesn't understand or agree with. "It's weird," a student told me. I thought she would tell me about a strange occurrence on the way to class, but she only meant her grade. "You gave me a C-."

Instead of, confused, or give me a reason, the epithet I get is weird.
"Awkward" deserves its own post. It's like weird in that it replaces what we'd rather say about a situation or unable to say, so we say weird or awkward instead. Everything is either weird or awkward. I think Franzen is keen to the usage of words, like weird, because the word becomes a substitute for whenever we rather not say what we would like to say, so we just say it's weird or awkward. It's similar to standing in front of a painting at a museum and saying, "That's interesting." We know we like the painting. We just can't give words to what we feel. Weird works like this, but it masks a moral attitude. Patty could have said the neighbor was sociopathic, or mean, or just plain bad. But it's weird. Nothing beyond weird was in her vocabulary. She avoids placing moral blame on an action by substituting right or wrong, just or unjust, with weird.

The word has taken on a moral ambiguity that Franzen links to a propensity to choose not naming an action for what it is out of fear of being labeled weird. By taking the weird stance, I protect myself from being weird.

Anything that threatens becomes weird. Weird is the neologism that defines fear of otherness. Building a Muslim Community Center in Tribecca? That's just weird.

Then there's "apparently." This adverb is everywhere in speech patterns I've overheard. It's supposed to be a useful way to suggest an inductive conclusion based on surface knowledge. "Jorge apparently had not studied because his answer sheet was blank when he turned it in to the teacher."

If something is apparent, it means I know it to be true only at the level of appearance.
People use the word incorrectly to talk about events that are known. "The J train's not running, apparently." Is it running or not? There is no "apparent" in sight. The word insinuates suspicion of a claim on certainty when no such suspicion is necessary. It's weird!

Posted by Greig Roselli at 1:03 PM No comments: