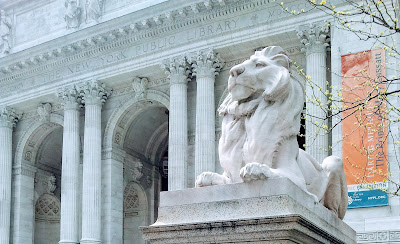 The 42nd Street Library (The Stephen A. Schwartzman Building)
If you live in New York City, everyone knows the 42nd Street Library on Fifth Avenue in Manhattan. The building (flanked by its two iconic lions - Patience and Fortitude) represents the city's public library system - even though the site is not a branch library (it's a humanities research library) and the city hosts three public library systems. The building is also embedded in the medium of American popular culture - everything from Ghostbusters, Sex and the City to Day After Tomorrow and Breakfast at Tiffany's have featured the library. So considering Spider-Man is New York city's own superhero - he's a teen from Queens, after all - it's fitting that the 2002 original Spider-Man movie starring Tobey Maguire would feature this iconic spot.

Peter Parker needs to study, so Uncle Ben drives him from their home in Forest Hills in his massive gas-guzzling Cadillac to the front steps of the library. It's there that he gives his famous speech: "With Great Power Comes Great Responsibility." Besides being a motivational speech given by a surrogate father to his maturing son, the address serves as foreshadowing to what's to come. Uncle Ben dies in a shoot-out caused by the trigger-happy actions of a thief (whom Peter Parker was unable to capture). Peter feels directly responsible for his Uncle's death - and it is his death that propels the Spider-Man story forward.


Do Kids from Queens Use the 42nd Street Library to Study?
How many kids from Queens go to the 42nd Street library to study? I am a teacher in Queens, so I really want to know. My experience is that Queens' kids stick to their neighborhoods - be it Jackson Heights or Forrest Hills. So I guess it shows that Peter Parker is an outlier - he chooses to expand his horizons. In reality, if you live in Queens, you are more than likely to use the Queens Public Library - which is actually a separate entity from the New York Public Library - but I digress.

Great Places to Study if You Want to Do a Peter Parker and Get Out of Bed
If you really want a quiet place to study but you don't have Uncle Ben's wheels to take you to Manhattan here are a few of my favorite places to explore in Queens:

PDF Copy for Printing
Posted by Greig Roselli at 5:10 PM No comments: