Planespotting at the Planeview Park in Queens

From a bench in Planeview Park spectators watch commercial jets take place and land at La Guardia Airport in Queens.
*** 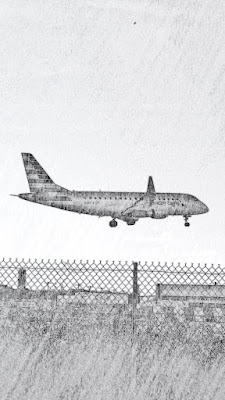 Today, I took the Q47 bus in Queens to the Marine Air Terminal at La Guardia International Airport. The bus line meanders through East Elmhurst, a neighborhood of detached homes north of Northern Boulevard that conforms to the crescent shape of the Grand Central Parkway. Considering that a busy airport abuts the neighborhood, it's a relatively quiet place for New York City. Along the route, I notice small neighborhood parks, a centrally located shopping mall (which is home to Cannelle Patisserie, one of the best bakeries in the city). The bus crosses Astoria Boulevard and terminates at the airport terminal. If you have never been to the Marine Air Terminal, it's worth a visit even if you are not scheduled for a flight.  The building marks the first structure on the site of the airport when commercial flights were chartered seaplanes (yes, these planes landed in Bowery Bay). Inside the terminal, look up, and take pleasure in a 360° mural detailing humanity's contributions to technology. It's a lightly traveled terminal; however, it is good to note that there are rather clean bathrooms at the entrance and a small café (at which I did not have lunch). I felt like exploring more of the airport's grounds and remembered a place where one can watch planes take off and land on one of the airport's two landing strips. So I walked along a security fence that borders the strip and watched a few commercial jets take off. Apparently, my presence invoked the curiosity of the Port Authority security task force because within minutes I noticed a police van pull up and a security officer said, "Hey. This is a restricted area. We would like it if you didn't stand here." I said meekly that I liked watching the planes take off and land. The guy was unmoved by my sudden confession of loving planes. For a brief moment, I had this terrible thought that he may think I am doing something suspicious. Before I had a chance to speak, he gave a half-apology and said, "Yeah. But you make the guys nervous. You know." I acquiesced to his gentle command to remove myself and asked him where I could safely watch the planes. That's how I found out about the Planeview Park. "Just walk that way," the guy said, pointing in the direction of the expressway. "I think there is a park on the other side of the Grand Central Parkway."


Sure enough, there is a park - but, beware, it is really only good for watching planes take off and land from Runway 04/22, the strip that is perpendicular to the Bay. The good news is that this strip is more often used by the airport, mainly because it is easier for pilots to navigate. The other strip, Runway 13, horizontal to the bay, apparently does not give pilots a lot of visual clues as to where the strip begins and ends. From the air, the difference between the dark blue hue of the bay and the mottled gray browns of the airport melt into each other. In terms of plane watching, it is beneficial to the on-the-ground sightseer that planes are landing on Runway 04/22.

Planeview park is rather non-descript. A few benches and a tuft of grass make it up. The park overlooks the Parkway, and I looked down and looked at the gaggle of cars that were traversing the highway in a seemingly endless stream. Three teenagers were huddled by the fencing to the park - I was guessing they were either taking a nap (judging by their listlessness) or coming back from a hit of MDMA.

The park began to fill up with sightseers who must have been clued into the fact that LGA had a bunch of landings about to take place. Children, especially, like to watch the planes, and as each jetliner came into view, kids would shriek, "Look, Mommy! A plane!" The planes seem to hover over the parkway, and almost feel close enough to touch, but with wheels out they bump quickly onto the tarmac and succinctly come to a halt. It is a robotic movement; a choreographed dance that takes place over and over again. Looking up I notice the control tower and it looks so enormous, so powerful, but quiet and commanding. I wonder what it must be like to work as an airline traffic controller. From my view it looks pleasant; the takings on and off like a soothing balm for my brain.

It was later in the evening, but the Summer sun was still in the sky. For a long time, six or seven planes took off; and then, there was a lull. But I looked up and saw that the sky was filled with planes ready to land. I could see in the distance planes approaching the runway, and one by one (followed by a few minutes) landed in exactly the same way each time. I expected to get a thrill from watching the in-the-sky spectacle but it was also comforting. Commercial jets in close-up look like toys. Flying a plane seemed easy, almost effortless, each plane following a fixed course. Of course, navigating an aircraft takes hours of practice and flight time before a pilot is ready for prime time; I envy the predictability of the landing and take-offs. I can see why hobbyists who are into planes, memorize jet titles and study flight patterns. It is a palate-cleansing hobby (and probably healthier than day-drinking).

Stray Observations:
PDF Copy for Printing
Posted by Greig Roselli at 11:33 AM