In this post, I jot down some thoughts on when I first saw Ingmar Bergman's 1957 black and white masterpiece The Seventh Seal. 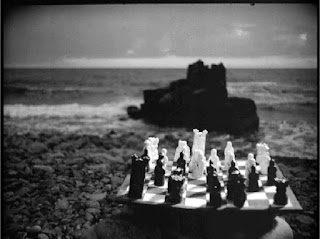 The Seventh Seal is a visually stunning movie. And it has a narrative that keeps the viewer fixated. Death has come to collect Antonius Block (played by Max von Sydow), a crusader who has returned home from war to find his home stricken by Bubonic Plague. Death offers a concession — beat him in a game of chess. And the crusader can cheat death. What transpires after this pact is a visual lexicon of human suffering and hope for that which is beyond all hope. Filled with religious symbolism that is concurrent with the era of the plague — Europe in the Fourteenth Century — the film plays on themes of chance and deceit to deliver its message. In one scene, the Crusader goes to a church and confesses to a priest, all the while, revealing what his next chess move will be. The curtain is revealed, and it is death itself pretending to be a prelate.
Ironically, the movie offers a sublime treatment on the theme of death and despair. And presents a couple of transcendent moments as well — including what appears to be a vision of the Virgin Mary who appears to Jof (played by Nils Poppe), a lovable roving theater actor (which I found to be shot in soft light, a trick of the camera that enunciates the ethereal moment and leaves the event to mystery. Was it really the Virgin Mary? Or was it just a mirage that the actor saw through bleary, morning eyes?
I first saw the Seventh Seal as a teenager. I had checked it out from the local public library and I know it had an effect on me. It was the first movie that I had seen that played with visual allegories — like an early scene where Death cuts down a corpulent human who has tried to escape by climbing up a tree! I remember trying to show the movie to a couple of friends, but they were bored by it and could not relate to its what seemed out-of-date imagery. I think I related to the idea of Antonious Block, preventing death from taking him, so he could carve out one meaningful event in his life after having lived it so vainly and disagreeably in war. At one point, Block asks, (and I am paraphrasing), "What is there?" and Death gives a matter-of-fact answer: "Nothing."
What I felt the movie was saying was that life is fleeting, and beauty is captured in a moment, then gone. The famous final scene — all of the cast carried away in a dance towards Death — seems to me, a visual for life lived, of the fragile connections we have with others and the suddenness with which life comes to an end. That is why Bergman chose the Plague as his setting. In a time of disease, death is everywhere; one can smell it, taste it, know it. And it forces one to come up out of one's everyday dealings and contend with finality.
Deep stuff.
PDF Copy for Printing
Posted by Greig Roselli at 2:52 AM