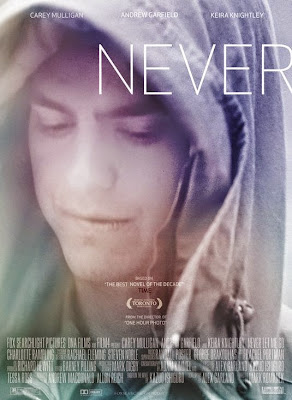 I was incredibly curious to see the adaptation of Ishiguro's exquisitely crafted novel Never Let Me Go ever since I had learned of Matthew Romanek's project.


I must admit I am a huge fan of the novel and I agree with Time Magazine's claim that it is one of the best novels ever written. So, suffice it to say, I was afraid the film might ruin the book. The same ole book-into-movie fear everyone who is devoted to the source material fears. Don't destroy the book's integrity is the argument that runs through most fears that a film will discredit the book. I had heard that Ishiguro had pretty much handpicked the people who would produce the movie and said publicly he was pleased. Watching the trailer did not help convince me, however. The trailer depicts lots of tears, sentimental scores, and one of the main characters having a hissy-fit on a darkened street which made me suspect that Romanek's version would end up spoiling Ishiguro's understated masterpiece. 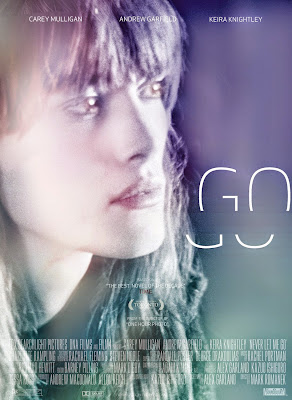 If you know nothing of the story's premise, I'm saying nothing to spoil the film by saying it is about a possible dystopic future where humans have discovered the ability to clone a subset of humans, which
they raise in schools across the country, educate them about the proper use of their bodies and health, but eventually use them to harvest their vital organs to defer the life spans of other, "real" humans. Death and disease are gone. At the expense of other "lives."

The premise is fodder for dozens of similar clone sci-fi films, but Ishiguro's novel brought to the table the basic question of what it means to be human and what it means when we consider a particular subset of human, un-human.


The film begins with Kathy H, a carer, whose job it is to care for donors, those selected to donate their organs until they complete - "complete" a euphemism for "no longer conscious" and donor as euphemism for "harvested." Carey Mulligan carries the role of Kathy H. impeccably. She is the same understated character I remember from the book. She is simply relating her story. Kathy H. narrates the story of her childhood at Hailsham House and how she became a carer, and especially the details of her friendship with Tommy and Ruth, whose short, brutish lives intermingle and part tragically at the end. The film falters a bit by paying too much attention to the Tommy-Ruth-Kathy triangle which only serves as a small section of the novel.

The novel, for example, took great pains to outline, piece by excruciating piece, the way the clones are treated by the rest of humanity. In the film, one does not get the sense of repulsion which was felt for the clone as creatures, without a soul. Several scenes from Hailsham are altogether omitted. Ruth's character is not adequately fleshed out in the film. She appears too forthright in Keira Knightley's adaptation. The Ruth of the novel is more confused and acts out of fear and ignorance than outright manipulation. Also, Tommy is a more tragic figure and I think Andrew Garfield fails to bring out his vulnerabilities. It seems as if in the film he sleeps with Ruth because Kathy has not made it clear that she loves him. While, I felt it would have been better to show that Ruth's relationship to Tommy was just another futile, short-lived cruel game akin to the way society as a whole treated the clones, shortly and brutishly. It is without a doubt a Hobbesian world. While Hobbes is right to say that "The life of man, solitary, poor, nasty, brutish, and short," it is more horrifying to think that life could be even more solitary, poor, nasty, brutish, and short.

The film works in its visuals. Even with a more emotive feel than Ishiguro's original, the film captures the subtle horror of the original novel. In some ways, we feel more intensely the cruel fate of these, "poor creatures," as they are called in one of the film's final lines. Alex Garland's screenplay plays close to the novel's storyline. Important quotes are kept. Scenes match up for the most part with scenes from the novel. The film depicts the operating room where donations occur. We see one donor with an eye patch. We see Tommy's scar where a lung has been removed. Ruth's carcass, in one final scene, is left unattended, her eyes wide open. The surgeons did not bother to clean her body and close her eyelids. The graphic nature of the donations is not detailed in the book. They are mentioned. But, descriptions of the bodies, of the possibility of what happens to a person after a final donation is left to the reader's imagination. What both versions leave out is what scared me the most: what happens if I complete but do not die? The possibility of this happening is mentioned but never described.

The film's final scene is chilling just as I knew it would be. The scene underscores the finitude of Tommy and Kathy's life. But, it also underscores the finitude of any human's life. Watching the film, I could not help but think of something that had never occurred to me while reading the novel. I had assumed Ishiguro was commenting on man's inhumanity to man, the cruel way man can strip another of "soul" and curtail his or her life. But, there was something in the filmic representation of Tommy and Ruth's meeting with their former guardians that made me feel as if the story was about its viewers. Tommy shows his guardians selections of his art, to show he has a soul. Art is supposed to be a representation of soulness, of inherent value. Miss Emily dismisses Tommy's notion that the reason for the art was to show the inner life of her former pupils, but she says the art was collected and shown to show others "that you had souls at all."

After the film ended and I got up to leave the theater I had a terrible feeling that the movie was talking to us as viewers, as if the film were questioning the validity of not just souls, but putting the viewer into a reflective state about finitude itself. Heidegger does talk about an authentic life as having finitude constantly in mind, but I think, here, there is something else. I think the chilling message of the film is twofold. Even if I am not a clone, whose life is curtailed and whose life feeds another's life, my life is still, nonetheless, and my life is not completely my own; it is for another. I could not help but think the movie is about the curtailment of history, stripping consciousness down to its bare elements, as allegory, to show, like Hobbes, the brutish nature of life.

We are Tommy and Ruth.

That is why we feel unsettled.

I could have done without the voiceover at the film's end. I would have been satisfied with a shot of Ruth and Tommy walking along the beach. We know Tommy will donate again and complete. We know. All to well. We know. And we don't know. "We've been told and not told."

PDF Copy for Printing
Posted by Greig Roselli at 1:33 AM