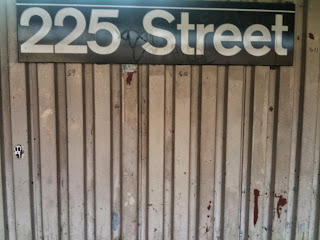 The Marble Hill Station is in Manhattan even though it is not geographically attached to Manhattan island, even though at one time it was. The path of the river changed. The Harlem river used to be further north, and like a slinking undertow, it descended further south where it rests now; I can see the river below me and feel its strength (although technically it is not really a river at all, but that's another story).

The streets here swirl around an invisible center like a Medieval town circles the church in the main square. The streets here, except Broadway (of course), avoid breaking through to the Bronx. The streets are circular, going back and forth into each other like a snake eating its tail. Buildings are placed in concentric circles. The Harlem River serves as a reminder that one is standing at the furthest northern terminus of Manhattan - and by virtue of this gerrymandered divide, the denizens here are Manhattanites.

From Van Cortlandt Park to here, chalet after chalet, the el seems to repeat itself, never getting anywhere, itself its own circle. Here in Marble Hill, the geography seems to beckon to Manhattan. Things are more compacted. The bodegas scrunch up against the bridge entrance as if to yearn for any stragglers who may have forgotten a sub or cola somewhere along the way. The Harlem swirl is close enough to smell. The heat is intense today. I'm craving a cherry limeade from Sonic. I settle for a cool beverage at Guzman Food Center, served in a brown paper bag with a straw. Several kids race across Broadway to the cool interior of the Target across the street. The air smells tepid. A transit employee stands near the 225th street northeast entrance; perhaps he is a station manager. He looks calm and collected. The rhythm of the train a quotidian sense of order. 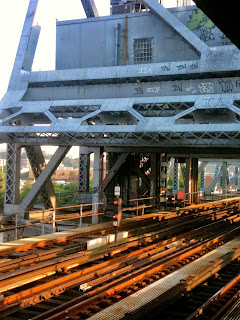 I am excited to walk across the Broadway Bridge into Inwood. Bridges loom ominous for me. It is said a bridge is a symbol of transition. I'm fearful if a bridge should collapse, I have somehow missed out on a unique opportunity. A bridge that is collapsing as I'm walking away? What does that mean? I am in the process of decoding a dream as if I have been here before; this bridge reminds me eerily of the bridge over the Industrial Canal in New Orleans on Claiborne Avenue, which is also a vertical lift bridge.

I decide to walk across the bridge to get the sense of vertigo I feel from standing close to the railing edge. The ships traverse the canal below pregnant with their wares. An elderly white couple walk ahead of me, in deep conversation. Bicyclists, as is the norm here in NYC, careen past. They always seem to be in much more of a hurry than I ever am. I prefer to walk. Peering down from the navy blue ironworks, I see Marble Hill Metro North Station. The Metro North system takes off in long sinuous strides to where the subways cannot go: to Riverdale, and the far reaches of the Connecticut burbs. The Harlem River seems contagious, brewing with rocks and tumult. I wonder aloud, talking as if I am attached to a Bluetooth headset, but am not, to how Marble Hill became a satellite neighborhood to Manhattan.


The monotony of the elevated trains is intense. I try to conjure up in my mind how Manhattan may have been like with the old els that traversed the avenues in the last half of the twentieth century. This city erases its memory effortlessly. But, here, in the rocky regions of Manhattan, the past somehow lingers more. Maybe it is the els. Or maybe it is the hint of geography. The Second Avenue El is long gone and hardly a vestige of it still exists, but the els here will probably remain for a long time; a super-city rather than a supra-city like the rest of the MTA system. It feels like Purgatory a bit. The circling madness of Marble Hills itself makes me a little nuts; I chuckle as if I am Dante escorted by Virgil, escaping the hell of the underground to find respite in Manhattan's only vestibule of souls. The el terminates at Fort George, though, and we are back in the bath of hell again. I like to think it is more like what Michael W. Brooks said about the subway system, neither hell or heaven exclusively, but both "sordid and transcendent" (207). 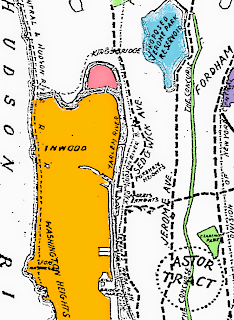 Would you like to read more? Fetch Greig Roselli's book of essays, Things I Shouldn't Have Said (And Other Faux Pas) for more good writing, dammit.
Posted by Greig Roselli at 2:41 PM