Libraries and Librarians in Film

EW did a thing on 18 movies with libraries, but I thought I'd add to the mix with just 3:
Citizen Kane
The Library Matron 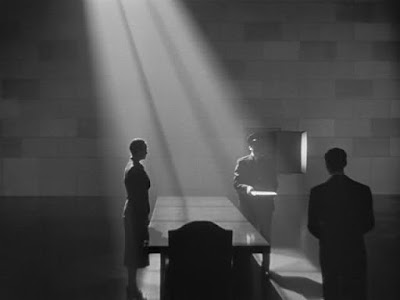 Citizen Kane (1941)
William Thatcher's diary in the famous Citizen Kane library scene
A stern-looking librarian leads a reporter into a cell containing a diary by Charles Foster Kane's guardian William Thatcher that may give him leads to the infamous newspaper magnate's sudden death. The journalist in the film plays the part of the dogged researcher who seeks out every possible avenue to sort out why did Kane spout out before he died, "Rosebud." He arrives at a fortress (or what appears to be a prison) that turns out to be an imposing archive. Granting permission to the journalist to peruse Thatcher's diary, The librarian tells him he can only read pages 83-142 and that he must leave the library premise by 4:40 sharp. I watched Citizen Kane for the first time with a librarian and she was quick to point out how librarians are erroneously depicted in popular culture as stern "guardians of the stacks." The mantra, it seems, is "the book shan't leave my sight!" I chuckle because the Kane library scene is sometimes true. I knew a librarian who went to the grocery store one afternoon and saw a patron in line and instead of telling her hello demanded to know why she had not turned in her overdue library book. True story. Anyway, I still consider this scene the quintessential library scene in film history even though it stereotypes librarians as "sole proprietors" of knowledge, I still love it. I think I was mesmerized by Greg Toland's brilliant cinematography: the way the light shines from above, illuminating the manuscript on the spare table, the way the camera makes you feel trapped inside the library walls, chained to nothing but a book. Then the camera focuses on a page in Thatcher's diary, I first encountered Mr. Kane in 1871." The book morphs into a flashback scene of little Charlie Kane playing in the snow with his sled. It's a stark effective scene as well as a metaphor for the increasing mystery of newspaper tycoon Charles Foster Kane's mysterious life.

Obi-Wan is surprised that not even the library has it!
Obi-Wan Kenobi goes to the library to look for a planet in the star database in the Jedi Archives.  Obi-Wan has the right information but cannot find the planet. The librarian insists the planet does not exist because it does not appear in the star charts where it is supposed to be located. If it is not in the database, then it does not exist, the librarian remarks. Coincidentally, I was with the same librarian I saw Citizen Kane with when I saw this movie and she pointed this out to me with the same chagrin on her face as she did when she pointed out the Kane librarian trope. The Star Wars librarian is another variation of the Kane librarian: not only does the knowledge not appear in the record, if the knowledge is not in the record then it does not exist. So, does that mean if I do not have a birth certificate I do not exist? I become a tad bit nervous when librarians began messing with my existential priorities. The flip slide is the student researching a term paper: "I cannot find anything on my topic." It doesn't exist? Even Obi-Wan knows that; in case you were wondering, it was the Sith who smudged the planet from the star charts to hide their nefarious plans to create a clone army. So it just goes to show you, if it is not in the database, and it is supposed to be there, someone bad took it out, like a Sith Lord.

Ghostbusters
The Library Catalog Haunted by a Ghost

I ain't afraid of no ghosts 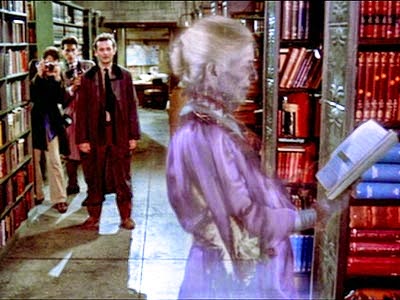 If you thought an archive powered by the Force was cool, what about a card catalog haunted by a slimy ghoul? Ghostbusters has a fun opening sequence that features none other than the famous New York Public Library (although the interior shots were filmed in a library in California). I like the part when the green slime emits from the card catalog. Priceless shot!

EXTRA! EXTRA! See my post on the library scene in Indiana Jones and the Last Crusade