A film about the holocaust filmed in black and white seems to suggest that black and white only represents the darkest, most insidious side of human nature, but Steven Spielberg is blithe to contend that even a bit of color can intrude in the darkest moments of human history. Interspersed within the panoply of dark and shadow granulation, a colored spectacle of a fated Jewish girl appears on film. The colored vision Schindler sees is supposed to represent his epiphany - the error of the Aryan solution. Schindler sees her carted off by the Nazis; her colored body adrift among a sea of gray. The absence of color represents everything stark. Everything Gestapo soldiers are not but the color of the little girl is: life, innocence, hope.

Although technically not a black and white film, this World War II flick reaches the limit of color while still retaining color status. I think it is the only color film that I still remember in black and white. The director and his color expert drained most of the color out of the scenes to give the film a grainy, realistic look, as if the viewer is right there with the soldiers on Omaha beach. It is a gritty film. I cannot say there is a better film in color that mimics the mise-en-scene of black and white any better than this one. A must-see. 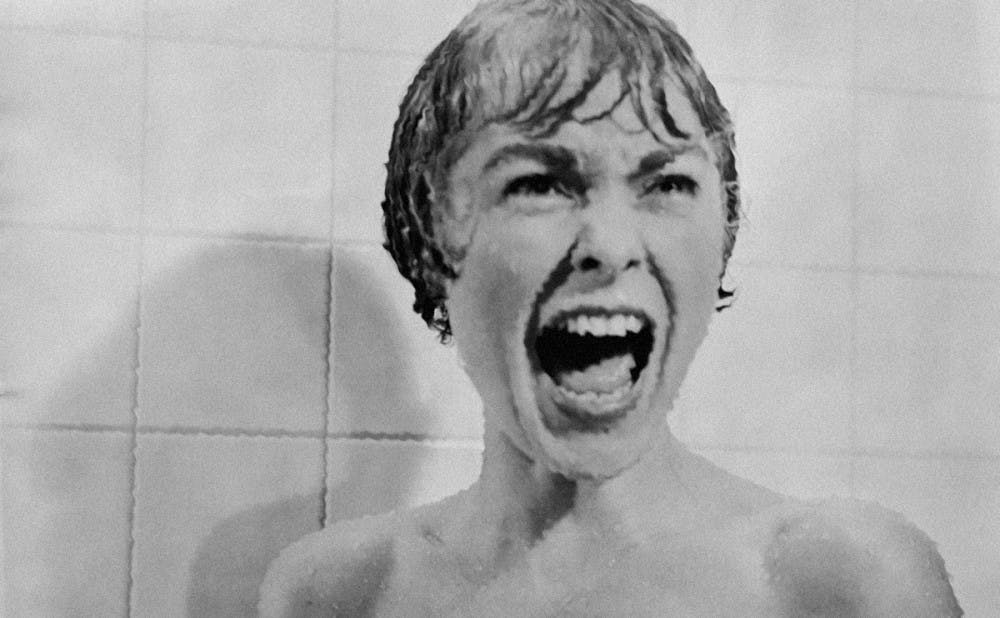 OK. Now when you thought I'd pepper this blog with only seemingly black and white films, I have finally added a true black and white film. Albeit, the shower scene was filmed with chocolate syrup, I still think the horror of this film is aptly felt. When I show the shower clip in the classroom as an example of the horror genre, the students laugh at the low-tech - but they fail to realize the beauty of the of the edit, the visual deletion of the knife hitting skin. I recently watched Gus Van Sant's loving reproduction of Psycho in full color and still remain partial to the original black and white piece. I think it has to do with the fact that Hitchcock is plain brilliant and Van Sant, although brilliant (recently watched his original genius, Mala Noche, and loved it) does not pull off even in reproduction what Hitchcock was able to do with sheer invention.

Again going on the metaphor of blood - there is something about seeing blood stream from a boxer's body in the rink that fares better in black and white than it does in color. Scorcese's film is a mixture of color and black and white. I think the reason Scorcese chose this montage was to exacerbate the underlying theme of the film: the vacillation of the alcoholic rage, going from prickly tenderness, as the familial scenes in the kitchen, to the parallel between domestic violence and the grueling games of the rink. I would say this film is almost too perfect to be filmed totally in color. In the discombobulated form of color and gray

If Woody Allen's films form a poetic paen to New York, then Wim Wender's orgiastic love song to war-blown Berlin is equally beauteous. I may be biased because I love the library scene in this film - and library books shine better in sepia tones anyway - a book does not need Technicolor. This film about angels entertaining us unaware is half a dirge and half a love song to humanity. I loved it. One thing about black and white - and sounds cliché but I will say it anyway - black and white cinematography, if done well, brings out the humanity of the human face (as an allusion to Emmanuel Levinas, somewhere).

7. The Seventh Seal (1957)
The black and white image of the Virgin with Child apparition coupled with the dance of death is beauteously rendered in black and white in this entirely diaphanous film. For a film about death, the beauty of a stark, rocky beach - a crusader and the personage of death - is painted in miraculous poetic tones. Of all the films I have ever seen, this film stands out as a gem of cinematic technique.

So, Woody Allen is a neurotic who cannot keep stuffing sunshine up his you-know-what, I still love this beautiful take on romance and cityscape. And yes, the plot is basically the same as all of Woody's films: an older neurotic cannot keep the young girls from falling all over him - but I have to say, of all the directors in this list, Allen has the unequivocal ability to make cinematic love to his city. What I like about Manhattan more than the dysfunctional romance is the paint brush swathed over a canvas. New York is a commonly filmed town, but Woody Allen's films make New York a character.

Lars Von Trier's eerie look at post-war France is both a Hitchcockian mystery, Cagney-esqe train thriller and existential romp that will leave you scratching your head. There must be something about existential movies (see the Seventh Seal) that seem to fare so much better in black and white than they do in color. Color is too happy (see Pleasantville) or is reality too much like Kansas (see Wizard of Oz). The distinction between color as freedom and black and white as fascism (and the race against time) seem to be the predominant themes in this little treat of a film from everyone's favorite Dogme hero. I think the prize goes to Europa for the last scene. I cannot image the death any other way than in water and in black and white. Water, trains, floating bodies - black and white for sure! 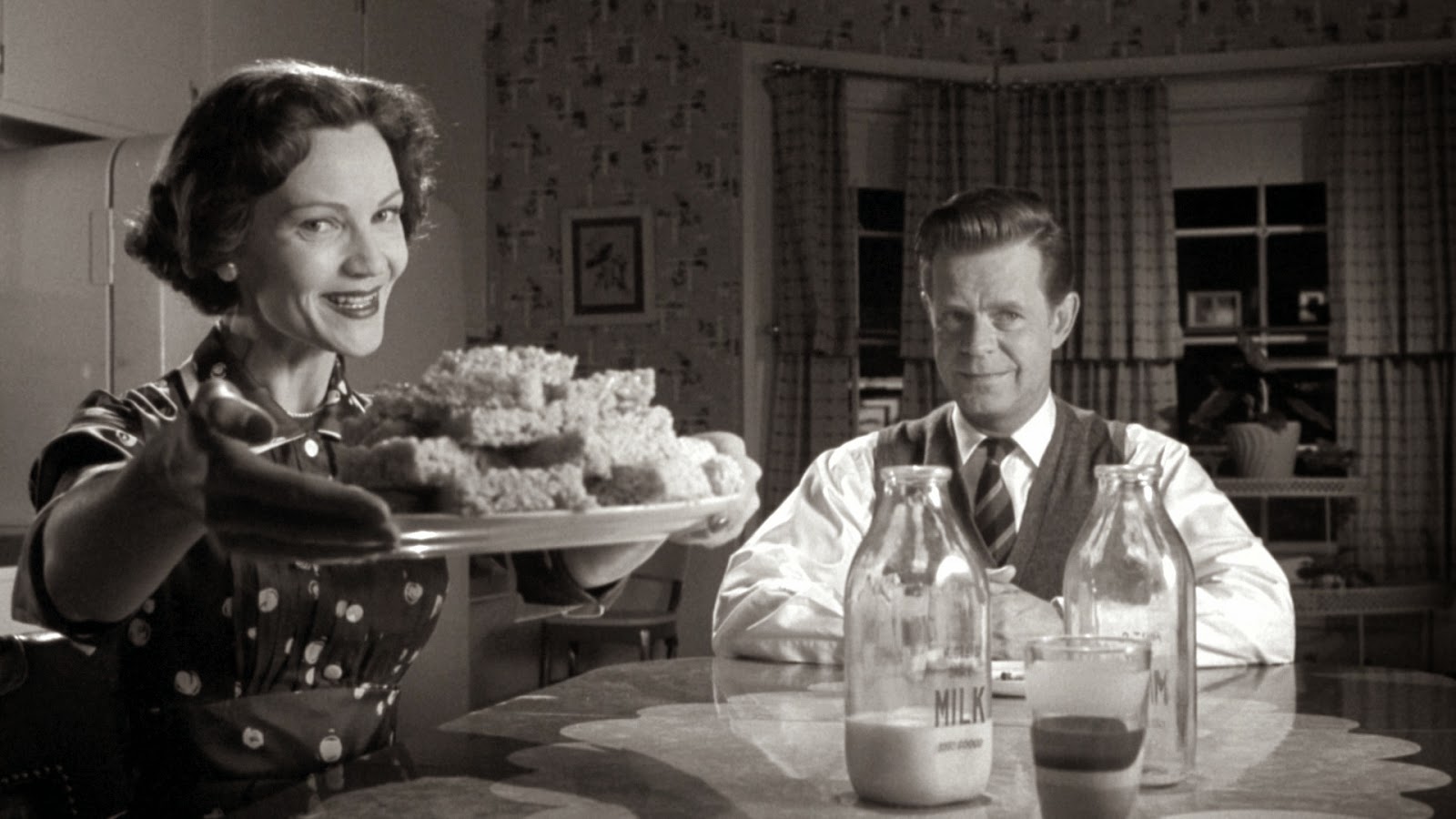 Just as the Wizard of Oz begins with a dream and enters dream reality, Pleasantville begins with an illusion and enters a satirical nightmare. Playing on the conventions of boring 1950s black and white television that needs some color, the film playfully looks at the land of Oz from a completely sardonic point of view. I thought the movie deserved a place in this list because it is perhaps the only film I am aware of that is so meta-aware of itself as a black and white film poking fun at black and white films.

PDF Copy for Printing
Posted by Greig Roselli at 1:29 AM