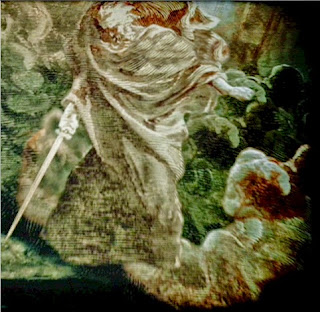 The speciesist point of view, that one species has more worth than another, or that one species’ interests takes precedence over another has its origins in the western philosophical hierarchy of the soul, first proposed by Plato in the Republic.  Plato divides the soul into the three distinct parts: as either vegetative, animal or human. The vegetative soul can be likened to an inert stone.  A stone exists.  And that is all a stone can do.  The stone has no interests.  It does not have rights.  No one, except for the hardcore deep ecologists, would posit that a stone has rights, or that a stone has interests.  The stone is no worse off if it is tossed into a gravel driveway or if it lies at the bottom of the Mariana Trench.  As Heidegger puts it someplace, a stone is a different kind of being, from say, a bug, and its stoneness is not contingent on its efficiency or potential for breaking a window pane.  We don’t call a stone, “that which breaks windows. “ It is there.  It’s name does not set it apart.  It can be picked up.  It can be skipped across the water.  But the stone cannot think of who is picking it up, nor can it feel anything specific about its trajectory across the surface of the water.  Nor can it be opposed in its mood to decide whether it wishes to be skipped across the water.
The stone does have a soul, what the Greeks considered its animating force, but only by its nature of existing, nothing else.  What the Greeks originally though of as a the life-force, the soul, in Greek, “psyche,” was bifurcated further, or let’s say, dissected into animal and human parts to distinguish from that which is inert.
The animal and human soul are different from the “stone soul” in that the “animal soul” can respond to its environment.  For when an animal is picked up it can resist; the animal is not just an aggregate composite of its parts; the animal does have a certain knowledge of its existence and of its efficiency.  The animal can maneuver itself in its world.  But the human soul, Plato claims, is different from the animal soul.  And this is where the speciesist argument comes in, although the deep ecologists might say speciesism is present in disavowing the stone of interests, but I digress.
The problematic provenance of the human soul imbued with reason is where the problem arises for me.  The human soul imbued with reason is what is often argued by philosophers as setting the human person apart from the animal.  Peter Singer points out in Animal Liberation that most philosophers have proposed reason as being man’s greatest gift without the realization that this “gift” does not preclude man from being superior to the animals.  Nietzche put it passionately about man being the measure of all things, “We philosophers are not free to divide body from soul as the people do; we are even less free to divide soul from spirit.  We are not thinking frogs, nor objectifying and registering mechanisms with their innards removed: constantly, we have to give birth to our thoughts out of our pain and, like mothers, endow them with all we have of blood, heart, fire, pleasure, passion, agony, conscience, fate, and catastrophe.  Life—that means for us constantly transforming all that we are into light and flame.”
It is our reason that has bifurcated the “soul” in the first place.  “I think therefore I am” is a big problem.  It keeps us asleep in the warm blanket of speciesism.  It is our reason that has given us the scissors by which we divide up everything into kinds.  Yes, it is true, that the human being is unique; the human can think; the human can feel; the human can produce art but these abilities do not grant us sole sovereignty because of our intelligence, no more than the color of our skin (the racist strand of speciesism) or our sex (sexism) or the number of limbs to treat cruelly another creature, let alone our own kind.  It is in this dividing into “kinds” which are reason dictates, that has made us into the Nietzchean divider of frogs and spirits.  Even the Adamic principle, that God gave Adam the power to name the animals, should not exclude animals from an equal playing field.  Which is why philosophers like Singer and Jeremey Bentham long before him, saw that universality of suffering, that a dog, as well as an Enron executive, feels pain, levels the playing field.  We all share a commonality in that we suffer and can experience pain.

PDF Copy for Printing
Posted by Greig Roselli at 7:00 PM