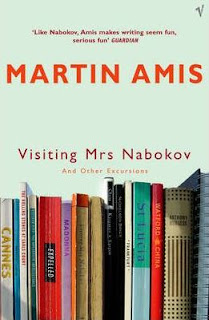 Folks Judge President Obama By Different Standards Than They Judge President Bush
Martin Amis, in his book Visiting Mrs. Nabokov: And Other excursions, contrasts venal negatives (e.g., masturbation without your spouse) to wart negatives (e.g., sanctioning third world nations) - examples are my own. The problem with America is we don't differentiate. We are a black or white bunch. It's either bad or it's good. Nuance is a difficult concept to grasp. But, we care about human rights; right? As much as President George Bush cared about PETA? As Amis mentions, did we vote for the guy cuz he was human? Here, meaning he said "fuck" and we considered him a "heybra". Obama is not a heybra but he's an intellectual democrat but not as gadflyish as Socrates. Obama won't be put on trial and asked to drink hemlock until he is accused of corrupting the social order (just like Socrates was accused of corrupting the youth?).
***
Play this game with me: go to a used bookstore find an intriguing quote and blog about it. We place too much emphasis on plagiarism but not enough stress on the appropriate use of ideas. Who doesn't want their ideas integrated? I know it sounds idealistically Hegelian of me, but geez, it's much better than some bloggers' dull stab at originality.
PDF Copy for Printing
Posted by Greig Roselli at 3:22 PM