I had come to expect loosely populated streets this summer, especially downtown, where normally Canal street is mediocre, even with the Insectarium, Aquarium and Casino traffic. The side streets of downtown, namely Julia, were hopping tonight. Art vendors swung open their doors and people strolled through, wearing their finest white attire (and some with no attire), wishing they could afford original art. I had never been to white linen night. So when Tony called, while I was at home camming on Stickam talking about video games and cell phone covers with a guy from Missouri, I decided to go. He was funny because he was streaming his live camera from a cell phone cover store. His shop is in an Army PX. He would talk to me and the others in the room and then, without a hitch, Say, “hello. How can I help you?” Then you would hear the chatter of customer talk. No one knew his laptop, stowed low on the cashier counter, held such voyeurism, including his queer boss. Only once did someone discover it: “So what you got there?” quipped a girl who had violated the sacred space between customer and proprietor. My friend told the girl, “I am on camera with my friends.” She was happy with that answer. But, this story is a story within a story. With Tony's call, I had to pull myself out of cyber world (which has composed my summer existence). I want to write a book about Stickam but that is another story.

Let us talk about White Linen: 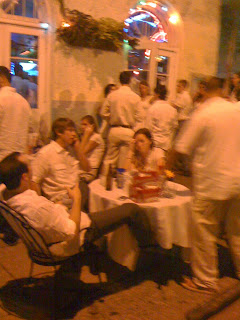 One gallery had a red carpet leading through its front doors with fake paparazzi taking our pictures. Instantly, of course, I thought of Lady Gaga. Even though New Orleans for me has never been associated in my mind with the glitz of Hollywood; it was nice to pretend. I wonder if Lady Gaga was at White Linen Night? She certainly could have fallen from a downtown condo similar to one in her video. The PAPA - PAPA razzi of the night mainly concerned local art. The Ogden was open as well as the Contemporary Art Center. We had not had this kind of art focus on Julia since Prospect One closed down shop in January. And of course, there is Art for Art’s Sake on Magazine. Difference: White Linen had no FREE booze. Not even water!

I heard there used to be free booze and cheese, but now, you gotta pay. Sucks. Even though the city is candidly an art gallery in of itself, the nights we dedicate specifically to art are special. A sketch of an alligator with two heads, to show a difference in motion: one head its jaw open, the other, its jaw closed, blood dripping from its mouth, called “In Remembrance of Jacko.” I wonder if the title was added as a dedication after Jacko’s death or before?
Now you could say the mass of white bedecked linens strolling Julia were Middle Class. Maybe upper middle-class white folk — like me! — who do not have original art pieces hanging in their homes — but it did strike me as funny the white in white linen also reflected race: I saw maybe three non-caucasions the entire night. 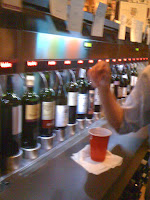 I made two faux pas at White Linen night:

1. I called a lady a bitch because she would not let me drink a glass of red wine in her store. Whatever happened to the congenial tradition of booze and art? She heard me but did not respond. I was a tad bit buzzed. One reason I am going straight to the burning flames when I cease to exist.
2. I took a photograph of some chick dressed in a peacock. See pictures. She was very angry at me. So, I post her here. 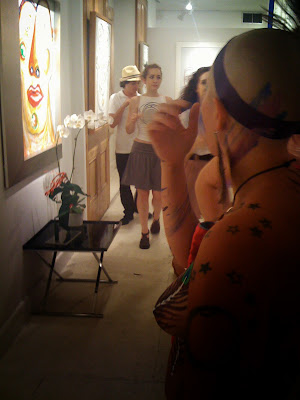 
Look at all the wine we drank at W.I.N.O. Miss Mae was heartily happy to drink some red. Tony luxuriated in the semi-port we drank. The machines are way cool. To drink some red or white, you simply pre-pay or put a card at the cashier. They give you a plastic W.I.N.O card. Simply place the card in a slot, position your glass at an angle, press one, two, or three ounces and frothy goodness flows forth. Miss Mae and I spent forty dollars between the two of us in probably forty-five minutes.
We drank from these bottles: I guess I could make this a wine blog and go into each one’s specific gustation, but I won’t here. 1.) I am tired and 2.) It is not my intent.

Now, I guess one could argue just buying a bottle of nice wine and sharing it is more economical than guzzling choice ounces but one pays for the experience.

And, as Miss Mae told me as we walked away from Julia street: “You are the consummate English major, always living to write about a new experience." 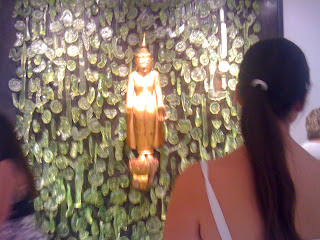 Ain't that the truth. I am seriously thinking of writing about Stickam. I have that text novel going but I have no idea where to go with it. Maybe John will have some ideas. :-)


PDF Copy for Printing
Posted by Greig Roselli at 3:57 AM