Corvallis, OR
Riding our bikes in avery park, we saw a snake eating another smaller snake. We were stunned by the way the snake gobbled up the smaller creature. As Ruy said, "it is the way snakes are." I have this video here, 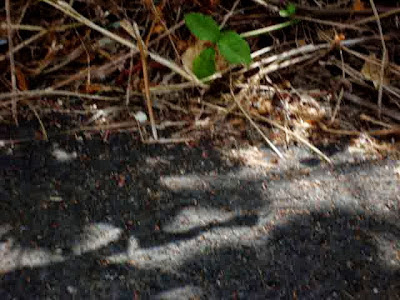 but I am not sure how good a job it does of showing the event. Ruy says snakes are a rarity in Corvallis. A boy stopped and watched the eating process with us. He wanted to grab the snake and show us the head but Ruy protested that it would disrupt mother nature's process so the boy did not do what boys love to do best, but you can tell by his face in this picture that he was more than willing if we had given him permission. 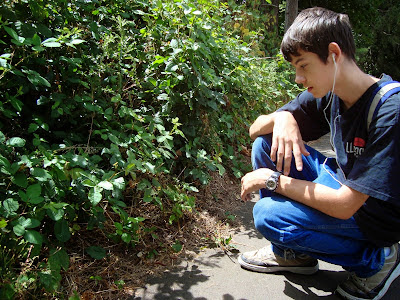 Avery Park in Corvallis is populated by a group of raucous men and their scraggly dog. These guys looked like they wanted to kill me when I first saw them but Ruy insisted they were harmless. They were huddled in a circle on the banks of the Marys River. 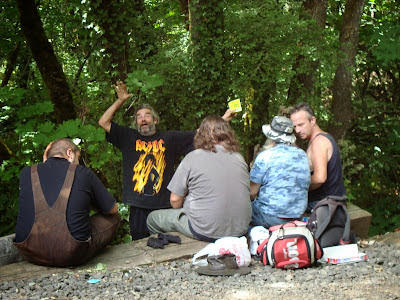 They kept on telling me that their dog had rabies which really scared me. I do not do well with rabid dogs!
We went to the Corvallis rose garden and we both laughed at the rose called "sexy rexy"! We climbed onto an authentic train engine populated by the areas children and Ruy who enjoyed climbing onto the train and acting goody. It was a lot of fun and Ruy appreciated seeing parts of Corvallis that he would not normally venture out to on his own.
We went to visit Shagamland. This is an intentional community in Oregon. An intentional community is what most of us would call a commune but I don't think they use that word anymore. 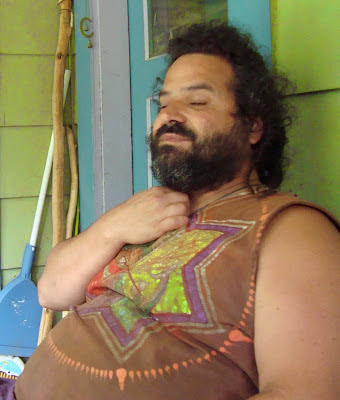 Phoenix, pictured here, showed us around and gave us a glass of water. This couple who lived down the road almost called the police on me because they thought I was trespassing but when they saw Ruy they calmed down a bit. Whew. Last thing I need is to get arrested.
I am in the Beanerie here in Corvallis but I better get back to Ruy's place before he starts to worry. Tomorrow we go to the Pacific coast with Kevin and Sarah.
Posted by Greig Roselli at 10:52 PM