Book Review: The Secret Life of Saeed the Pessoptimist 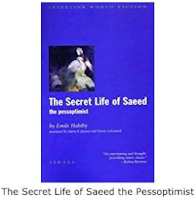 In The Secret Life of Saeed the Pessoptimist by Emile Habiby, a Palestinian illegally gains re-entry into Israel after the deportation of Palestinian refugees in 1948. Saeed eventually gains an advantage, working for the Israelis and living in Israel; He falls in love with Yuaad, whose name means “it shall be repeated.” He loses her; apparently, she dies after been deported by the Israelis. Saeed’s life is one of inconsequence and random opportunism. As a contradistinct Candide, Saeed calls himself and his family pessoptimists. It’s his family’s way of thinking about the world, a little bit of optimism mixed with a touch of pessimism. Not quite as optimistic as Dr. Pangloss in Voltaire’s Candide, “the best of all possible worlds” nor is it as gloomy as Schopenhauer’s philosophical pessimism. “Pessoptimism” is like Saeed’s mother’s declaration that her son who died in a crane accident, his body smashed on rocks at Haifa’s coast, tell her daughter-in-law, “It’s best it happened like this and not some other way!” Maybe a pessimist would have said, “What do you expect? I’ve always known he would die a horrible death!” Or an optimist: “Well at least we know he’s at peace!” As is obvious, Habiby’s novel is like Voltaire’s Candide. Both books set about poking fun at a certain world-view — in Voltaire’s case it is pathological optimism that states that the death of thousands of people in an earthquake in Lisbon is justified as God’s will. Voltaire makes fun of this absurd optimism by drawing it to its extremes. In a similar way, Habiby is taking this conglomerate philosophy of optimism/pessimism called pessoptimism and drawing it out to its extremes. Doing this, Habiby draws attention to the absurdity of the Palestinian/Israeli problem. Throughout the narrative, there are incidences of pessoptimism that make satirize the ambiguity between who claims a right of return and who doesn’t, who is a Palestinian citizen and who is Israeli and who is secretly working for the opposite side. Saeed’s family is from a long line of pessoptimists. “The Pessoptimist family is truly noble and long established in our land” (8). Saeed’s family had been scattered abroad, even before the Palestinian deportation, to Lebanon and Syria. His father even worked for the Iraqi government after the establishment of Israel; not because of allegiance to Israeli nationalism but rather because of the pessoptimist notion that it wasn’t as bad as having nothing. When Saeed’s father is killed on the road (I imagine, by stray bullets during the fighting of ‘48). Saeed marries Baqiyaa, whose name means, “she who has remained,” even though her village was destroyed by Israeli tankers. They bear a son, Walaa. Walaa is not a principal character in the novel, but I think his character typifies young, Palestinian masculinity — or any situation where a young man grows up in an environment where the definition of home is unstable one and where children are taught to whisper, not even to sing in the shower, lest they be heard and arrested.

Walaa is a taciturn child. Saeed regrets that he and his wife neglected the boy growing up because they were both preoccupied with gaining financial independence in a country that refused to recognize them as citizens. When Baqiyaa tells her husband about a secret treasure under the sea, Saeed obsessively goes to the rocky beaches of Haifa to search out this hidden family treasure. Walaa grows up listening to these stories. When he himself grows up, he refuses to acquiesce, like many Palestinian young people, and chooses to become a freedom fighter, a fida’i. Edward Said, in his moving book, After the Last Sky, could be talking about young men like Walaa, when he writes about the “population factor,” the fear that Palestinian children will inevitably grow up to be terrorists, “that our children,” he says, “[are] to be feared, and hence to be deported …. I heard it said … that Palestinian children, in particular, should be killed because each of them is a potential terrorist. Kill them before they kill you.” In this same paragraph, on the adjoining page is a photograph by Jean Mohr of a Palestinian boy, more than eight or nine years old, who seems to have “skipped a phase of growth or, more alarming, achieved an out-of-season maturity in one part of their body or mind while the rest remains childlike.”
Saeed, when he finds out Walaa has discovered the family treasure and used it to buy weapons, he realizes the discrepancy between his son’s scrawny chest and his deep voice. Any of the youths in Said and Mohr’s book or the front pages of national newspapers could be Walaa. Walaa, in the novel, grew up living with secrets. His parents constantly told him to be careful about what he says. When he sings in the shower, his father tells him to stop, for you never know who is listening. Walaa, like most teenage boys, exerts his own identity, but instead of sex, drugs and rock and roll, Walaa discovers independence from his family by breaking the family code of secret-telling.
Now, when the boy is trapped by Israeli guards, ordering him to give up the treasure of weapons, Walaa ignores them and his mother’s pleading. Walaa cries out from his hiding place beneath the rocks, while his father desperately listens from afar, that his life has been nothing but suffocation. His mother tells him to surrender. Why suffocate and die? Walaa answers, “Suffocate? It was to breath free that I came to this cellar, to breathe in freedom just once.” He says he has been suffocating all of his life. Then, his mother, in a sudden act of heroism, plunges into the sea and both mother and son escape. It is a miracle scene. It is like a scene out of the Arabian Nights, mother and son turn into merpeople — or better yet, into golden fishes. It is as if both of them tap into their original “Oriental Imagination.” It is their imagination that saves them. As mother and son swim off into the distance, miraculously escaping certain death, I am reminded of the passage earlier in the novel, when Saeed remarks that a person’s shadow lengthens as they move further and further away; the shadow remains even though the person has been kicked out or obliterated. Walaa’s speech takes on a more resonant tone seen in this light and not just a teenage boy’s act of rebellion. Walaa is representational of thousands of Palestinian boys who have lost their lives fighting for freedom. When Walaa and Baqiyaa disappear into the sea, Saeed is left alone again. It is the Pessoptimist that remains. Saeed’s life, as he himself realizes, is inconsequential in the light of the bigger, global picture. even though his life is remarkable, he says, the first man “to be saved by a mulish donkey” (6). He was spared, so he says, during the fighting of 1948, “… because a stray donkey came into the line of fire and they shot it, so it died in place of me” (6). So, it is ironic that in the end, another Saeed, Yuaad’s son, becomes a famous freedom fighter. Saeed, the one saved by an ass, meets the other Saeed in prison. This other, remarkable Saeed the pessoptimist, the ill-fated, makes Saeed remember that his own son was a martyr and a courageous soul. There is a hint of this when after his son Walaa disappears with Baqiyaa, Saeed goes to the rocks to look out into the sea. An Israeli child approaches Saeed.
Saeed tells him that in the sea there are fishes who only know Arabic. They are the oldest. The ones who know both Hebrew and Arabic are the newer fish. The little boy is amazed at this tale of the “Oriental Imagination.” Saeed thinks, “If only people could remain as children. Then Walaa would not have grown up and I would not have lost him.”

PDF copy for printing
Posted by Greig Roselli at 11:36 PM